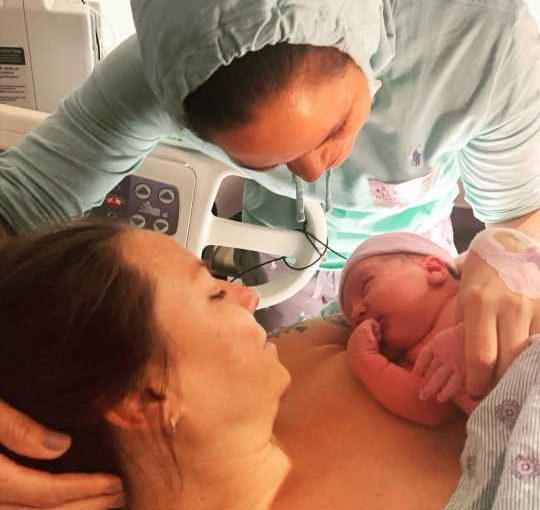 The UFC power couple welcomed their first child, a daughter named Raegan Ann Nunes, on Thursday, Sept. 24, Ansaroff announced Friday on Instagram alongside a photo of the new family of three in the hospital.

"Raegan Ann Nunes is here! I am so in love! I can't wait to show you the world!" she wrote in the caption, sharing her baby girl's birth date following a string of double-heart emojis.

"September 24th 2020 Will forever be my favorite day. You are a dream come true," added Ansaroff, 34. "Happy daughters day my beautiful girl."

Posting a similar snapshot that showed her leaning down to kiss their newborn's head, Nunes, 32, wrote, "Speechless ❤️ #happydaughtersday #love." 🤰🏻…. Getting close. I Can’t wait to meet you baby girl. #RaeganAnn #Babygirl

How I Parent: A Dad in a Same-Sex Marriage Who Used a Surrogate to Have a Son

Nunes and Ansaroff announced in March that they would be welcoming their first child in the fall.

"I am excited to announce that Baby Raegan Ann Nunes will be here mid September!" Ansaroff, who is currently ranked fifth in the women's strawweight division, wrote on Instagram, alongside an adorable photo of the couple holding up a black-and-white baby dress and a pair of white sneakers.

"I cannot wait to meet her!" the fighter added, going on to share that she was carrying their baby on the way — and planned on getting back into the ring "after she is born."

Nunes, who is the reigning champion in the women's bantamweight and featherweight divisions, also made it crystal clear how excited she was to become a mother.

"I wanna tell every single person on this planet that … Raegan Ann Nunes will be here mid September!" she wrote. "I cannot wait to see her." (Alongside her celebratory message, the Brazilian-born fighter also shared a sonogram video and photo.)

The couple, who met at an MMA gym in Florida back in 2012, have been open in the past about their desire to start a family together. "I'm taking a year off," Ansaroff told TMZ in December, as the couple shared their plans for 2020.

"I'm gonna be training throughout my pregnancy. I'm gonna stay in shape," she added, noting that she planned on competing in the flyweight division when she returned to the ring.

Back in 2018, the pair also celebrated another major relationship milestone: getting engaged!

"#shesaidyes," Nunes captioned a photo of the pair cuddling up alongside each other as Ansaroff showed off the diamond sparkler.

In her own coordinating post, Ansaroff simply wrote, " … #Isaidyes."