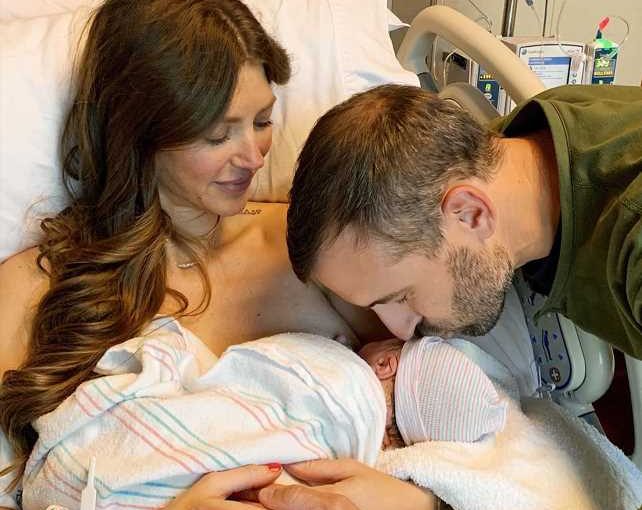 AshLee Frazier is a mother of two!

The Bachelor season 17 alum, 40, announced the birth of her second child on Thursday, sharing two snapshots of herself with the newborn and husband Aaron Williams in the hospital.

"Introducing, Everleigh Anne Williams. Born 9/29/20, 7 lbs 7 oz, 20.5 [inches]. She is absolutely perfect and healthy," Frazier wrote. "What a blessing to have our love double! I never knew love could be this big!"

"Baby spam is coming," she promised.

And the former reality star more than delivered, sharing an adorably squirmy video of Everleigh to her Instagram Story — as well as a sweet series of clips showing older daughter Navy Lee, 2, meeting her baby sister for the first time as her parents arrived home from the hospital. Chris Harrison on What to Expect from Season 16 of The Bachelorette: "It's a Wild Ride"

Frazier announced her pregnancy at four months along back in April, with a photo series that featured the then-mom-to-be with her husband of three years and daughter Navy.

As Williams held up a strip of ultrasound photos, Frazier carried their toddler, who wore a pink shirt reading, "I'm going to be a big sister!"

"Navy has something she wants to tell you. She's going to be a big sister. We are overjoyed! 🤍," the lifestyle blogger wrote in her caption.

The following month, Frazier shared a cute snapshot of her daughter telling the camera she was expecting a little sister, writing, "The reveal! 👛🦕 Sound on. Navy says it softly but she knows!! She's been saying since day one!"

Still a party of 3. What’s your best advice for a new parent of two?

Frazier — who made it to the top three on Sean Lowe's season of The Bachelor before he delivered the final rose to now-wife Catherine Giudici Lowe — tied the knot with Williams in a March 2017 ceremony in Houston, at his parents' lake house overlooking the picturesque Lake Conroe in Houston, according to E! News.

"Aaron and I are madly in love with Navy Lee," Frazier told PEOPLE exclusively following Navy's arrival. "She is more beautiful and precious than we ever could have imagined. Our hearts are overflowing!"

One day before Everleigh's birth, Frazier was treated to a sweet song from Navy in honor of her 40th birthday. (Like her mom and sister, Navy is also a September baby, having celebrated her birthday on the 11th of last month.)

"Best birthday! 🤍," Frazier captioned the adorable video, which showed Williams starting the song and Navy expertly finishing it up.