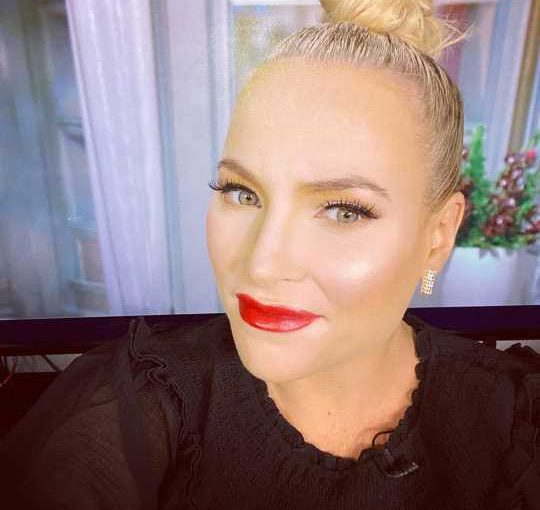 Meghan McCain is counting down the days until the arrival of her first child.

On Friday, The View co-host, 35, gave fans a rare update into her pregnancy by sharing her due date.

Posting a selfie of her "topknot" on her Instagram, McCain wrote in the caption, "2.5 weeks until my due date and trying to keep myself looking as stylish as humanly possible while feeling like shamu."

The expectant star capped off the message with three emojis of a pregnant woman.

Topknot Friday! 2.5 weeks until my due date and trying to keep myself looking as stylish as humanly possible while feeling like shamu. 🤰🏼🤰🏼🤰🏼

McCain, who announced in March that she is expecting a child with husband Ben Domenech, has been very private about her journey to motherhood amid the pregnancy.

McCain explained that she doesn't want to expose her unborn child to the vitriol that can accompany her social media posts, where trolls often leave hateful words about her late father Sen. John McCain.

"People keep asking and requesting I show pics & details of my pregnancy," she shared on social media in May. "Given that people write on photos I put up of my family they are glad my Dad got cancer and he's in hell, I thought I would leave my unborn child out of the social media cesspool as much as is possible."

Meghan continued in a lengthy Instagram caption, saying she and Domenech, 38, "have made the conscious decision to guard our (growing) families privacy as much as is possible" and adding, in part, "I believe children have a right to privacy and hope you will all understand as we navigate this as much as possible going forward without sacrificing our comfort or safety."

Ben and I have made the conscious decision to guard our (growing) families privacy as much as is possible. I believe children have a right to privacy and hope you will all understand as we navigate this as much as possible going forward without sacrificing our comfort or safety. A bunch of inhumane jackasses have really ruined so much for so many on social media and I learned a lot of hard lessons about cruelty that comes with being open and vulnerable about my personal life during my Dads cancer fight. It is a shame. I know this is an unorthodox choice for a talk show host who is on tv five days a week – but I’ve always lived by the beat of my own drum. Thank you for the continued kind words, support and prayers regarding my pregnancy from so many of you who are nothing but kind. It has meant a lot during this crazy time. ♥️

Last month, McCain opened up about why she hasn't yet shared any photos of her belly to social media, saying in an Instagram Story, "I'm sorry I'm still not sharing pics of my baby bump — there are a lot of cruel things written about me in the press on an almost constant/daily basis."

"Normally I just let it go because it comes with the territory of being an outspoken conservative woman on TV — but I've felt intensely protective and private over this time in my life and the privacy of my child," McCain wrote. "I hope all the wonderful people who are so supportive and kind understand!"

However, the Daytime Emmy winner did give fans a glimpse into who she's preparing for the baby by sharing that "the nesting phase of pregnancy is NO joke."

"Pray for my husband and the amount of boxes he's had to open in the past few weeks … " she added, tacking on a shrugging-woman emoji.