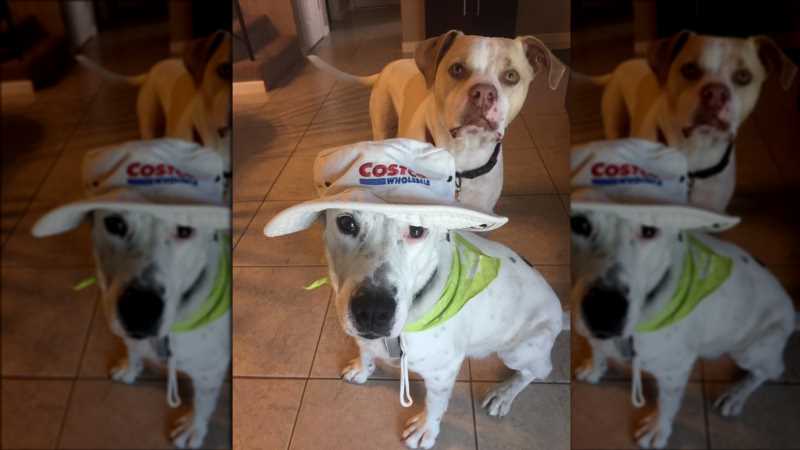 Costco members are a loyal breed, so it stands to reason that many of them would have faithful canine companions of their own. Or cats because, well, lots of people have cats. Plus, cats are pretty low-maintenance, which leaves more time for those marathon Costco expeditions complete with food court hot dogs, pizza, and froyo. (Better bring home some pet snacks, too, since you know your beasties can sniff out the fact that you’ve been indulging in people treats.)

Costco may be a one-stop shop for groceries, clothing, electronics, and, well, basically everything to take you quite literally from cradle to grave, and they haven’t forgotten your fur friends, either. Admittedly, they’re a bit light on supplies should your animal companion be of the scaly, finny, or feathered variety (although their website does carry a small selection of chicken coops), but if you’re more into doggos or kitkats, Costco’s got some pretty amazing bargains for pet parents.

Costco doggie beds are the best

A Reddit thread on don’t-miss Costco pet products brought out numerous comments on the price and quality of their dog beds. One Redditor kicked things off by saying: “The round $29.99 dog beds are great. They look nice and much less expensive than other places,” while another agreed that they are “actually really good quality and way cheaper than getting one from a pet store,” while a third called them “a steal.”

Yet another Reddit user testified to the fact that, in addition to being affordable, the beds are high quality, calling them “durable,” and going on to say “My dog had his bed from Costco for 6 years (and it traveled with us a bunch in addition to getting beat up by the dog from time to time).” One comment, however, brought up one unexpected drawback to the beds: “They’re also apparently delicious. Our Rottweiler really enjoys them!”

Costco treats, as well, got a lot of love on Reddit. One user said, “My pup goes bananas over the Nubz and also the Chicken apple sausage treats,” calling both “super high value treats that are good for training.” Another Nubz fan mentioned that there are often coupons available for these. Still other users recommended the Kirkland Signature version of dental chews, one saying, “Our pups wake us up early every morning to get their ‘toothbrush,'” but several others mentioned their pets’ preference for a different Costco doggie dental treat called Checkups.

Yet another treat popular with many Redditors (or at least their dogs) is something called a bully stick, which, for the uninitiated, is a bull’s … you know what. One commenter pretty much summed them up by saying: “Most dogs love them. Smells horrible. Great chewing treat,” while others remarked on Costco’s reasonable charge for this often-overpriced item. Yet another Costco treat, this one recommended by Top Dog Tips, is Doggy Dollars. These are made with human-grade beef, brown sugar, salt, rice flour, and flavorings. True to their name, they will set you back a few bucks, but $44.99 for 300 treats isn’t all that bad for something your pooch won’t turn up her snoot at.

Not every Costco pet product is a hit, however. Users of the Consumer Affairs website rated Kirkland Signature cat food (variety not specified) as a mediocre 3.5 stars. While some of the reviews spoke to its quality and affordability, others spoke of their cats rejecting the food or even becoming ill from eating it. The reviews — and the horror stories — for Kirkland Signature dog food (again, no particular type was listed) were even worse. Consumer Affairs users awarded it only two stars, on average, and some even cited this food as being to blame for causing their dogs’ untimely deaths. One review, posted in June of 2019, spoke of a visit to a vet who explained that “about a year ago the Costco dog food formula had changed and she was seeing a lot more dogs with [health] problems that ate Costco dog food.”

That being said, these reviews are no more trustworthy than any other crowd-sourced testimonials, and the somewhat more authoritative Dog Food Advisor rates Kirkland Signature dog food as four out of five stars, noting that the last recall involving this product was in 2012 and calling it an “above-average dry product.”

Costco’s pharmacy is known for having some pretty great deals on meds which can, in some states, even be accessed by non-members. They also deliver prescriptions via InstaCart, as well. Did you know, however, that they also fill prescriptions to keep your pet healthy, as well? One Redditor advises: “Don’t forget medications including heartworm and flea/tick. Saved us a lot,” while another says that flea and tick prevention is “super cheap compared to most brands.”

Not just flea and tick stuff, though, but more specialized meds are also available — one user mentions saving big bucks on Apoquel, while another says that Costco pharmacy can fill prescriptions for antibiotics, NSAIDs, anti-anxiety drugs, etc. “for a fraction of the price of your vet,” although cautioning that you might need the vet themselves to call in the prescription rather than having the office staff do so. Oh, and if your pet’s not a big fan of taking pills (like every other pet, ever), you’ll be glad to know that, according to one Reddit commenter, Costco also sells “pill pockets!…[at] a great price.”