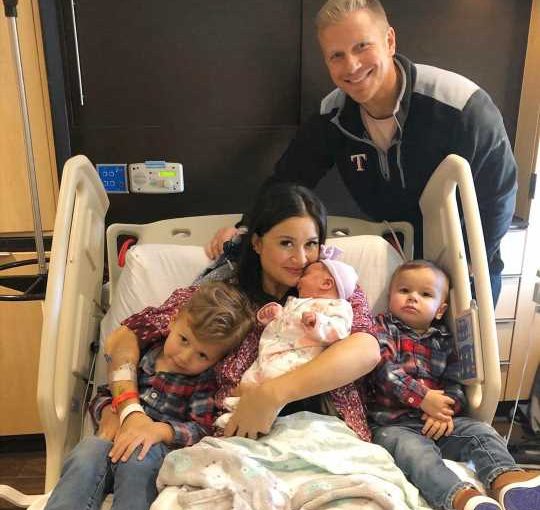 Catherine Giudici Lowe had more than a few baby name runner-ups in mind for her newest addition.

The Bachelor alum, 34, and husband Sean Lowe welcomed daughter Mia Mejia, 8 months, on Dec. 23, but before settling on Mia, the parents mulled over a few other monikers.

Answering fan questions on her Instagram Story over the weekend, Catherine revealed that the other girl names she was considering were Geneva, Ravenna, Cristiana, Livia and Sabrina.

And in the event they welcomed a son? Jude, Lennox, Elijah, James and Henry were all potential boy names for the couple, who are also parents to sons Isaiah Hendrix, 2, and Samuel Thomas, 4.

Elsewhere in her Q&A with followers, Catherine opened up about conceiving her children, sharing that their process was relatively seamless, acknowledging that that's not the case for so many. "… thank the Lord I am very very blessed that I have never had an issue," she wrote.

And when a follower inquired about whether she would "slap" Sean, 36, if he asked to have another baby, she quipped, "I never need a reason to slap him."

Never miss a story — sign up for PEOPLE's free daily newsletter to stay up-to-date on the best of what PEOPLE has to offer, from juicy celebrity news to compelling human interest stories In January, the couple told PEOPLE about how they're adapting to being Mom and Dad to three kids under 4, explaining that their two older children quickly bonded with their newborn sibling.

“There is something really sweet about newborns,” Sean said at the time. “They sleep a lot. You just cuddle them and hold them. Catherine obviously gets the majority of the responsibility when it comes to the newborn, but when they are older they are a handful! So I want to enjoy the newborn phase, because it doesn’t last for long.”

“Before we had kids, we said we wanted a home full of love and laughter and I think so far we’ve succeeded,” added Sean. “It’s a lot of chaos, but it’s fun chaos!”

The father of three joked to PEOPLE in June that he hopes his little ones don't mind that their parents met on a reality TV show. The pair met, fell in love and got engaged on season 17 of The Bachelor in 2013. They tied the knot in a fairy-tale wedding that aired live on Jan. 26, 2014.

"I'm hoping the kids don't care — that they think it's super lame when they're teenagers," he said. "But I've got a backup plan, if they really are interested … Catherine had someone edit the entire season where it's only me and her, so we can show them that, as opposed to the whole season with all the other women involved."