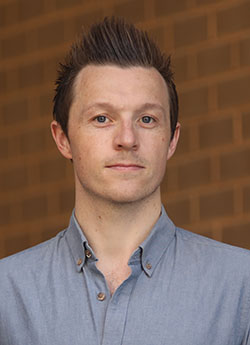 Justin Rustenhoven, PhD, a postdoctoral researcher at Washington University School of Medicine in St. Louis, has been named a finalist for the Eppendorf & Science Prize for Neurobiology. This international prize is awarded annually in recognition of outstanding neurobiological research conducted within the past three years by a young scientist and described in a 1,000-word essay.

Rustenhoven’s prize-winning essay, titled “A privileged brain,” is available online in the journal Science. The prize will be presented Nov. 9 at the annual meeting of the Society for Neuroscience.

Rustenhoven, who works with Jonathan Kipnis, PhD, the Alan A. and Edith L. Wolff Distinguished Professor of Pathology & Immunology and a BJC Investigator, was recognized for his work unraveling the interconnections between the immune system and the central nervous system. His research with colleagues revealed that the immune system keeps tabs on the brain by stationing immune cells in the meninges — the tissue that covers the brain and spinal cord — where they sample fluid as it washes out of the brain. If the cells detect signs of infection, disease or injury, they are prepared to initiate an immune response to confront the problem.

In further work, Rustenhoven and colleagues showed that the skull is the source of brain immunity. The researchers showed that a group of innate immune cells arose in the bone marrow of the skull and spinal vertebrae and entered the meninges via direct channels through the bone. From there, they swarm into the brain and spinal cord in response to injury or disease. Together, the findings reveal key elements of brain immunity and open up new avenues to preventing or treating neuroimmune conditions such as brain infections and autoimmune conditions.