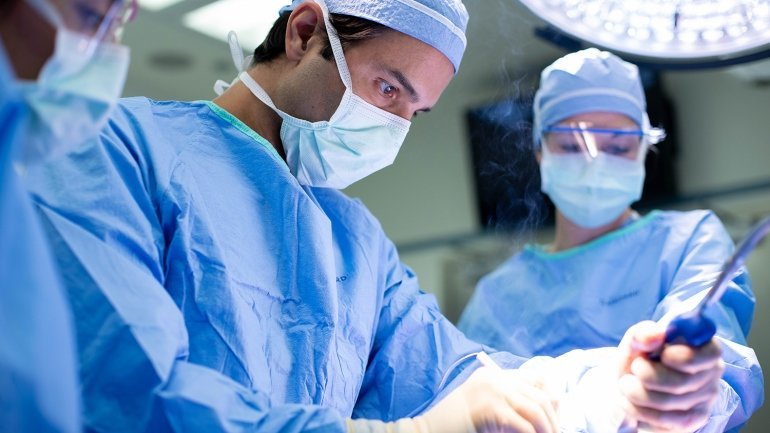 For nearly four decades, the main option for breast reconstruction for women who had to undergo a mastectomy was to place implants under the main chest muscle – a procedure that often results in chronic pain and muscle weakness in the chest and arms.

It also creates a strange unsightly contraction of the breasts and chest whenever the main muscle – the pectoralis major – contracts, called animation.

“Whether it’s loss of strength, whether its chronic pain or whether animation deformity – there are drawbacks to putting these implants under the muscle,” said Hani Sbitany, MD, a plastic and reconstructive surgeon at UCSF Health.

Now, Sbitany is one of a handful of surgeons who are pioneering and studying the outcomes of a new approach that is less invasive, has a less painful recovery and results in more natural looking breasts.

The procedure is called a prepectoral reconstruction, and involves placing the implants on top of the pectoralis muscle, just under the skin where breast tissue naturally resides.

Cohan was diagnosed with breast cancer in 2013. Within a few months she had a complete mastectomy, followed by chemotherapy and later breast reconstruction. At the time the prevailing method was still to place the implants under the pectoral muscles.

“After the reconstruction I was having tingling symptoms in my hands and arms … when I would raise my arms, my hands would go white,” said Cohan, a physician at UC San Francisco. She also developed left shoulder pain and felt substantial pain in her chest.

“It was hard to work at the computer, I couldn’t open doors or jars without feeling chest wall pain,” said Cohan. Cohan says she tried all kinds of things to address the pain: physical therapy, chiropractic adjustments, acupuncture, conscious dance and meditation – but she chose not to use opiate medicines for the pain. “I learned to live with chronic pain but not cover it up.”

The surgery also left Cohan with animation: “Whenever I would flex my pectoralis muscle, the implants would move up my chest, so I had to wear shirts with a super high collar or my breasts would fall out, basically.”

Deanna King had a similar experience. After being diagnosed with aggressive breast cancer in 2013, within a few weeks she had a complete mastectomy and reconstruction.

“When you have your implant under the pectoral muscle, oftentimes you get this weird, jerky animation, so when you move your breasts sort of jump up and down,” said King.

Pain and weakness often stem from the invasiveness of the surgery, during which the surgeon dissects the pectoralis muscle, cut parts of it, separates it from the ribs and create a pocket underneath it in which the implant sits – permanently stretching it for life, said Sbitany, who is an associate professor of Surgery at UCSF.

In hindsight, it may seem obvious that breast implants should be placed above the pectoral muscle.

But the reason surgeons began putting implants underneath the chest muscle in the 1970s is that placing implants directly under the skin resulted in higher infection rates. Additionally, the immune system often reacted to the foreign body leading to significant buildup of scar tissue that encapsulated the implant. Other times the skin wore away and the implant was exposed.

Putting the implants under the large pectoralis muscle mostly solved these problems because muscles receive high blood flow, which helped reduce the buildup of scar tissue around the implants and reduce infections.

But in recent years, Sbitany and other surgeons have found a way to keep the implant on top of the muscle and address those problems: they’re surrounding the implants with a biologic mesh, essentially a thin layer of collagen.

“Now we can put the implants under the skin and a subsequent next layer of biologic mesh to protect the implant – so the implants are not right under skin, so the implants are sitting under a layer of mesh, in a pocket we’ve created using the mesh,” said Sbitany. “In essence, we have the ability to do a totally muscle-sparing, muscle-preserving breast reconstruction.”

A whole host of elements that have evolved in recent decades have made the above-the-muscle approach not only feasible, but a far better option, said Maurice Nahabedian, MD, formerly of Johns Hopkins University and Georgetown University and now in private practice.

Nahabedian says the early generation of breast implants were “pretty questionable”; they tended to rupture and produce a lot of inflammation and scar tissue, and reconstructive failure was really high.

“But what’s changed is now we have acellular dermal matrices (biologic mesh), we do fat grafting all the time, we have better quality mastectomies and we have better implants. And we’ve really been able to capture the benefits. I can’t even imagine going back to putting an implant back under the muscle anymore.”

The fat grafting helps to be able to add protection around the implant and better contour the shape of the new breast, he said.

For patients like Cohan and King, that has meant a host of improvements.

Four years after her original implants, in a fluke cab ride conversation with a stranger, Cohan learned that prepectoral breast reconstruction was now an option. Cohan did some research in the Bay Area and found UCSF’s Sbitany. She opted to undergo another surgery to remove the subpectoral implants and put new implants with biological mesh just under the skin.

“So after the surgery, not only did my animation deformity go away and my chest pain get better, the pain in my left shoulder completely disappeared,” Cohan said. The shoulder pain stemmed from the previous detachment of the pectoralis muscle from the ribs, which then pulled at the shoulder and arm muscles.

“And, I was finally able to take a deep breath,” she said. “In fact, my first conscious moment in the recovery room after surgery was taking the deepest inhalation I was able to take in five years.”

King’s decision to undergo another reconstruction surgery was more complicated. She had been diagnosed with terminal cancer, so she initially thought she wouldn’t bother with a corrective surgery. But then she decided she might as well live in comfort.

Both women are active people, and grateful to freedom of movement back.

“I’m so appreciative that Hani listened to me, and to other women,” King said. “It’s very easy for surgeries that seem just fine, for surgeons to continue doing it, and there isn’t necessarily a pressure to innovate unless doctors listen to patients.”

Further Research About the Benefits

Surgeons like Sbitany and Nahabedian have been promoting the prepectoral technique at national surgery conferences and also publishing scientific research.

Not only is this surgery less invasive, Sbitany is also researching outcomes for women who have prepectoral breast reconstruction followed by radiation therapy.

Another benefit of avoiding dissecting the pectoral muscle is a substantial reduction in pain.