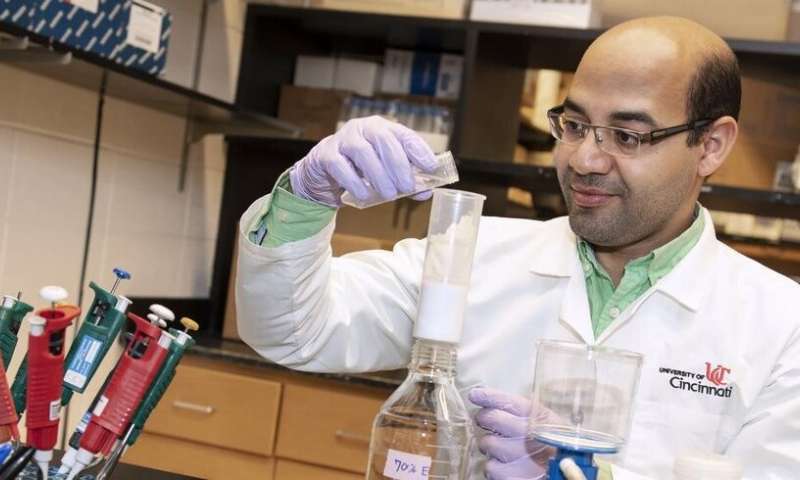 The extract of the leaves of Ginkgo biloba, a popular dietary supplement, may offer some therapeutic benefits in fighting Type 2 diabetes, according to a study co-authored by a researcher at the University of Cincinnati (UC) College of Medicine.

“In diabetic rats Ginkgo biloba had a very good effect on the beta cells of Langerhans—cells in the pancreas responsible for insulin secretion—by creating a restorative effect similar to what we see in healthy non-diabetic rats,” says Helal Fouad Hetta, Ph.D., a postdoctoral fellow and scientist in the UC Division of Digestive Diseases. Hetta is also on faculty at Egypt’s Assiut University College of Medicine in the Department of Medical Microbiology and Immunology.

The study in animal models by an international team of 13 researchers was published in the journal Diabetes, Metabolic Syndrome and Obesity: Targets and Therapy and is available online. The first author on the research is Ahmed Saleh, Ph.D., Jazan University in Saudi Arabia.

“The extracts derived from Ginkgo biloba have been frequently used in traditional medicine and have been shown to exhibit antioxidant potency,” says Hetta. “Magnetized water, which has been passed through a magnetic field, has also been reported to reduce blood glucose, improve antioxidant status and lipid profiles in diabetic rat models.”

In this study, Type 2 Diabetes was induced by feeding rats a high-fat-diet for eight weeks followed by intra-peritoneal injection of a single low dose of streptozotocin, explains Hetta. Forty rats were randomly assigned to four groups: a non-diabetic control group and three diabetic groups. One diabetic group served as a positive control (diabetic), while the other two groups were orally administered with water extract of Ginkgo biloba leaves and magnetized water for four weeks, respectively.

The beta cells of diabetic rats are reduced and insulin secretion is curtailed. After having Ginkgo biloba and magnetized water added to their diets, the mass of the pancreatic beta cells and the amount of insulin in these cells was shown to increase markedly, almost back to normal levels, particularly in the Ginkgo biloba-treated group, says Hetta.

In addition, both Ginkgo biloba and magnetized water improved the anti-oxidant status and reduced the oxidative stress associated with type 2 diabetes by down regulation of the two antioxidant enzymes, glutathione and superoxide dismutase 2, in the pancreatic tissue, says Hetta.

These findings for Ginkgo biloba’s impact on Type 2 diabetes are preliminary, says Hetta.

“We still need more evidence about possible benefits for Type 2 diabetes so there is ongoing research,” says Hetta. “Our findings need to be tested in human clinical trials of large sample size.

“Gingko biloba is one of the oldest living tree species,” says Hetta. “Most Ginkgo products are made with extract prepared from leaves. Most research on Gingko focuses on its effects on dementia and age-related memory impairment such as Alzheimer’s disease and pain caused by too little blood flow or claudication. It is commonly available as an oral tablet, extract, capsule or tea. It is not toxic when used in low dosages, but can interact with other medicines.”

“I would not recommend eating raw or roasted Ginkgo seeds because they can be poisonous,” says Hussein. “It should be taken as a capsule or in tablets if used. Also, if you are currently taking medications please consult with your physicians before considering Ginkgo biloba.”