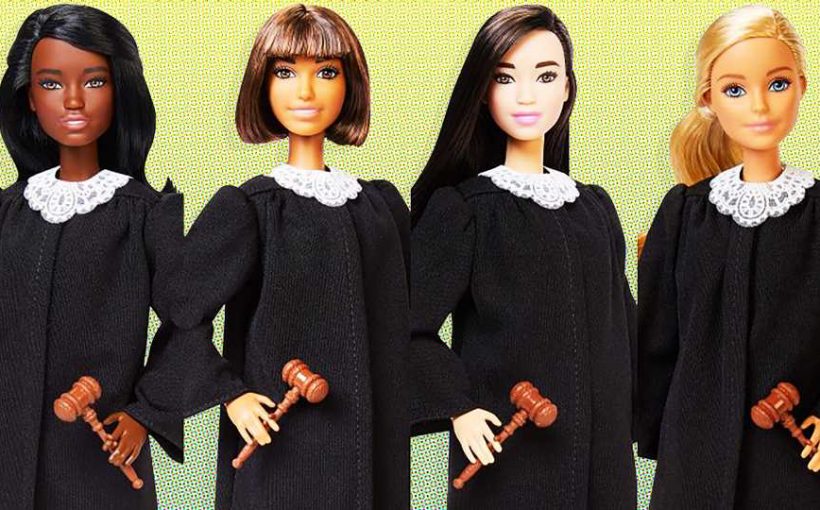 Where was Judge Barbie when we were growing up and feeling boxed into careers that were bizarrely marketed as “for women”? Sigh. Thankfully, these days our pal Barbie is continuing to break barriers and show little girls that they can grow up to be anything they want. Mattel announced on Twitter Monday that the 2019 career of the year doll is “tak[ing] the stand” in her black robe, judge’s collar, and gavel. And while her lacy collar might remind you of Ruth Bader Ginsburg, it was far more than just love for the Notorious RGB that inspired this release.  Mattel told USA Today that the company was inspired to create the doll after learning only 33% of sitting U.S. state judges are women.

While Mattel and Barbie have been historically criticized for creating unrealistic body standards, the doll has long been pursuing careers where women are underrepresented. As Mattel points out in its tweet, this is one of over 200 careers Barbie has had over the years, including astronaut, photojournalist, and beekeeper. More recently, the company has gone further, releasing dolls that represent a more diverse range of backgrounds, abilities, and body types. And while some of these toys are more likely to be collected by adults than played with by kids, the judge Barbies are priced nicely for playtime: it’s currently retailing for $13 on Amazon and Target.

Barbie has been at the vanguard of more inclusive toys at Mattel, though the company made headlines more recently for releasing its first gender-neutral doll collection, Creatable World. So far, the move towards better representation has paid off. Barbie has seen sales rise after dipping in the past decade as the doll failed to compete successfully with toys like Bratz and Monster High. The sales numbers are also a reminder that Barbie’s growing diversity driven by business, not intersectional feminism. At the same time, however, knowing that their business gamble is working means that dolls in judge’s robes and hijabs and wheelchairs are getting into the hands of kids across the country, and that’s worth celebrating.