Home » Kids Health » A pick of kids’ fiction, non-fiction and YA books by Indian authors from 2018 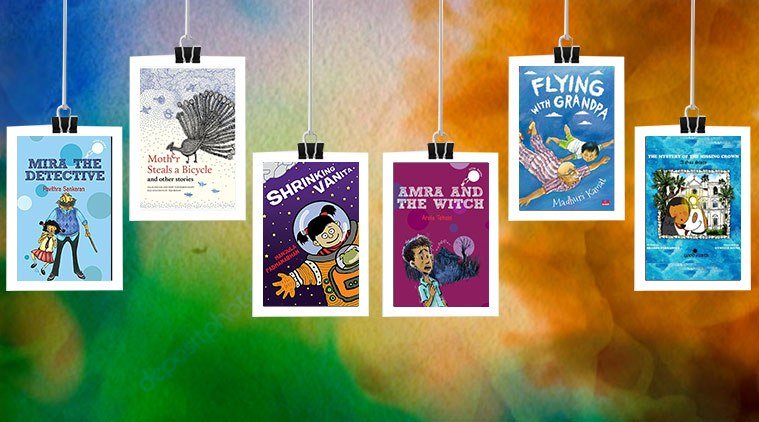 Read about the highs and lows of school to fantasy and environmental concerns in this extensive list of books for kids who have just started reading independently, middle school reader as well as young adult and non-fiction titles by Indian authors published in 2018.

Getting your child started on reading independently? Or looking for books for your little bookworm? Here are a pick of titles from 2018.

Mother Steals a Bicycle and Other Stories

Did parents get up to mischief as kids?  In this book, which comes alive with illustrations of hyenas, peacocks and insects, a mother tells her child about the adventures she had growing up in a south Indian village. Published by Tara Books.

Treasure At The Train Station – An Adventure In Mumbai

The magical story set in Mumbai’s Victoria Terminus or today’s Chhatrapati Shivaji Maharaj Terminus, the story weaves together a fantastical tale involving a missing jewel, a grandfather and his grandchildren. Published by Eicher Goodearth Pvt Ltd.

Painting Everything in the World

The Rathwa tribe in Gujarat mirrors all that is in creation through their wall painting, known as Pithora and considered a form of worship. This story introduces children to the power of art. Published by Tara Books.

Where Has the Tiger Gone?

Mystery of the Missing Crown: A Goa Story

Josephine and her menagerie of a dog, a mynah and a one-eyed cat investigate the long-deserted Villa Falcao as they hear haunting music coming from it. They unearth old secrets as they search for the missing relic of the village of Rachol, in Goa. Published by Eicher Goodearth Pvt Ltd.

Shrinking Vanita has just three days to go before an asteroid destroys Earth. Can she do it? Published by Tulika.

Arun is forbidden from entering the forest near his house, but he breaks the rule and has t face the wrath of fierce King Yaksha, spirit guardian of the forest. Published by Tulika.

Sandy to the Rescue

Sandy’s mom is getting bigger and his friend Aftab needs saving from Mrs Gupta and her cat. Published by Duckbill.

Susie Will Not Speak

Jahan’s best friend Susie has a lisp and fed up of being teased by boys in the park and kids at school, she decides to stop speaking. What can Jahan do? Published by Duckbill.

There’s something fishy going on as an antique watch is stolen and a neighbour goes missing…a job for Mira the detective. Published by Duckbill.

Petu’s friends are worried he’ll take to a life of crime as he starts cheating. Can they stop him? Published by Duckbill.

Peanut vs the Piano

Peanut loved the piano, but Moonish Sir’s scolding has put her off the experience. Published by Duckbill.

Amra and the Witch

Amra has done something really wrong. Can the witch help him? Published by Duckbill.

One seems snooty and dull, while the other fierce with too-bright clothes. Can Jiya and Urmila ever be friends? Published by Duckbill.

Xerxes’ mother wants to separate him from his grandpa, who she considers to be a bad influence. Maybe if Grandpa learnt to fly, it might solve the problem? Published by Duckbill.

Raja Balushahi and Rani Rasmalai in Mithaspur & Other Adventures

For siblings Arjun and Anindita, a boring vacation at their grandparents’ house turns adventurous after an enchanted laddoo takes them to the magical land of Chamatkar Nagri, where they find lost treasures and rescue mythical creatures. The book comes with a pullout board game! Published by HarperCollins.

Things are sure to go wrong, when an owlet, a cricketer, a wrestler and a cricket match are involved. Published by Talking Cub.

It’s the year 2027 and 10-year-old Anoushqa has never seen rain and doesn’t believe in her grampa’s stories of rainbows, thunder and lightning. But now, he wants see rain before he dies. Can she fulfill his last wish?

Horrible Hudhud is cursed by his history teacher after he eats up his classmates’ lunches and plays cruel pranks on teachers.  He journeys across oceans and deserts as a blue whale calf separated from his mother, a caterpillar who befriends a hunting spider and more. Published by Puffin.

A look at the Indian teen and highs and lows of high school through the film that 13-year-old DD is trying to make. Published by HarperCollins

Vismay brings home an abandoned puppy from a San Francisco animal shelter. Can he take care of this hyperactive ball of energy, expecially when Cody leads him to buried treasure? Published by Tulika.

A few days before Maitreyi is set to start the new year at Hill School, her mother tells her to meet a brother she hardly remembers. If you like this one, pick up Trouble: Hill School Girls, the next in the series.  Published by Duckbill.

The Magicians of Madh

Something sinister is afoot at the Royal Academy of Science, Magic and the Arts…a standing statue sits down, traders in Madh find their goods have been turned into djinn gold. Will Meenakshi and Kalban be able to get to the bottom of it all? Published by Duckbill.

The third in the Ninja Nani series, there’s a mummy at the Gadbadnagar Museum and somebody is trying to uncover Ninja Nani’s identity. Published by Duckbill.

Spreading Your Wings: A Health Infocomic for Girls of All Ages (Age: 9+)

By Ariana Abadian-Heifetz, Pia Alizé Hazarika
Sisters Anjali and Pooja have a several questions about the changes their bodies are undergoing and have enlisted their friends and a doctor did, along with their mothers to search for answers. Published by Young Zubaan

An artist and rebel, Amrita Sher-Gil forged her own path to become a painter of world renown. Get to know the artist, who was born in Hungary, raised in India and trained in France. Published by HarperCollins India

Make these toys, with step-by-step instructions, while understanding the science behind some of them, besides enjoying poems and jokes. Published by Tara Books.

Take a walk into India’s unforgettable past as you dine with Mughal princess Jahanara Begum; enjoy a jugalbandi with Mian Tansen and go kite-flying with the nawabs of Chandi Chowk and more. Published by Puffin India.

If your child loves interesting facts, this book is packed with interesting nuggets, such as how a great emperor who was erased from history books for nearly 1,500 years, why the iron pillar in the Qutub complex does not rust and more. Published by Talking Cub.

By Moti Nandy, Translated by Arunava Sinha
Best friends Jibon and Ananto are promising cricketers but the former loses half his right arm after an accident. His cricketing career may be over, but he makes it his mission to see that his friend plays for India. Published by Talking Cub.

It’s the year 2025 and 20-year-old Anirudh is getting visions of Krishna. It turns out he is the last avatar of Vishnu and it’s up to him to restore the balance between good and evil. But, before that, he has to battle an ancient nemesis, in the first part in the Kalki Chronicles. Published by Penguin

When Morning Comes (Not Our War)

Set in 1976 in South Africa, it tells the story of Zanele, a nightclub singer who is plotting against the apartheid government and her best friend Thabo, schoolboy turned gang member. Published by Duckbill.

Year of the Weeds

A Gond resistance against a company set to mine their sacred hill for aluminium ore is told from the point of view of Korok, who tends the garden and Anchita, an artist who lives in the house with the garden. Published by Duckbill.

Priyanka Das has several unanswered questions: Who is her father, and why did her mom leave him behind? For Pri’s mom, the topic of India is permanently closed and it can only exist in her imagination. Till she finds a mysterious pashmina. Published by HarperCollins.

Srinath, Suresh and Harleen live at the Guild of Orphans. After a particularly bad scuffle, they fall out of the window to see their building, and others like it, walking away. Published by Ms Moochie Books.

Legend of the Wolf

It’s two days of fun and hiking in the hills of Chikmagalur for Madhu, Gaurav and Sunil and their teacher, Rajesh sir, but strange things start happening. To their horror, the teenagers realise that they are being stalked by a bloodthirsty wolf. Published by Talking Cub.

Tiana Singhal’s life was going just fine, especially with the plum internship at an architectural firm. Suddenly, she is haunted by nightmares and confronted by a stranger. The answers lie in her past. Published by Tulika Books.