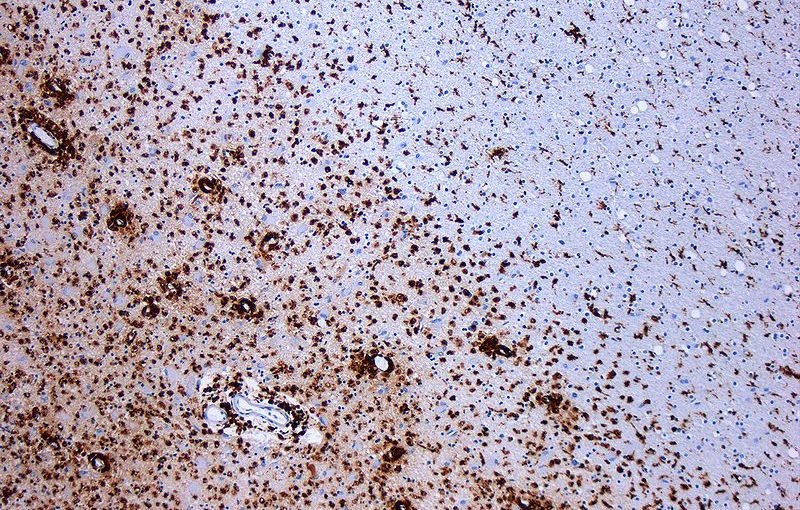 Leiden chemists discovered a new mechanism which might explain how multiple sclerosis shifts to a more severe form. Their findings contribute to unraveling the mysterious course of the disease. They have published their findings in the journal Biochemistry.

MS and a virus

In their publication in Biochemistry, Can Araman and Sander van Kasteren from the Leiden Institute of Chemistry and Bert ‘t Hart from the Biomedical Primate Research Centre came one step closer to revealing the mysterious disease mechanisms of severe progressive MS. In their research, they delved into the fact that the risk of getting MS is highly associated with infection with the Epstein-Barr virus (EBV). Almost 95 percent of the world population carries this virus, opposed to a percentage of 100 percent in MS patients. All MS patients thus carry EBV.

More than 2 million people worldwide are suffering from multiple sclerosis, in short MS. This multifaceted disease affects the immune system and damages the cells of the central nervous system. MS is divided into different types and progressive states of the disease. The most common form is the relapsing-remitting type. People with this type of MS experience periods of relapse in which new symptoms appear, alternated by periods of recovery. The other types of MS are all progressive and more severe. In the progressive types, symptoms worsen over time, with or without periods of relapse and recovery. The shift to progressive MS is not yet fully understood. While adequate treatment for the most common type of MS exist, only limited treatment possibilities are available for the more severe types, due to its enigmatic disease mechanism.

MS affects the so-called myelin oligodendrocye protein (MOG). Araman explains that normally, this protein is part of a shield that is wrapped around the cells of the central nervous system. It protects them from getting damaged by external stimuli, both physical and chemical. “What has been previously known is, in the case of MS, MOG is degraded and this so-called shield is damaged,” he tells. “The nerve cells are therefore less protected.” Because of its altered shape, cells of the immune system no longer recognize the degraded shield as part of the own body. They see components of the degraded shield as a treat. Hence, MOG is taken up by the cells of the immune system, subsequently causing an immune reaction and leading to the known immunity-driven disease pattern in MS.

In addition to this already known mechanism, Araman and his colleagues now discovered a second mechanism in which MOG plays a part. It might explain how MOG contributes to the onset of progressive MS. The researchers found that EBV infection modifies the protein in such a way that it forms highly-structured and insoluble assemblies of MOG, that form so-called amyloid plaques (see frame). “These plaques are of toxic nature and also appear in other diseases affecting the central nervous system, such as Alzheimer’s disease and Morbus Parkison, formed by distinct proteins,” Araman tells. “They kill the cells in which they were produced.” But that’s not all. This aggregated version of the protein becomes non-antigenic meaning it is not recognized by the immune system anymore. It therefore silences the immune response to these harmful portions of MOG.

The findings show that progressive MS not only has properties of an autoimmune disease, but also is a so-called amyloidopathy, a disease in which amyloid plaques are formed, that affects the central nervous system. Up to now, there were only clinical symptoms to differentiate between progressive MS and the other forms of the disease. “We showed that a protein that is first attacked by the immune system in MS, becomes non-antigenic and kills the cells in which it is produced upon aberrant modification,” Araman explains. “This might be the mechanism that explains the shift to progressive MS.” This new knowledge might contribute to new methods of treatment. “In the future we might be able inhibit the neurodegeneration in progressive MS, by selectively targeting this harmful modification and the enzymes that catalyse the subsequent reaction.”