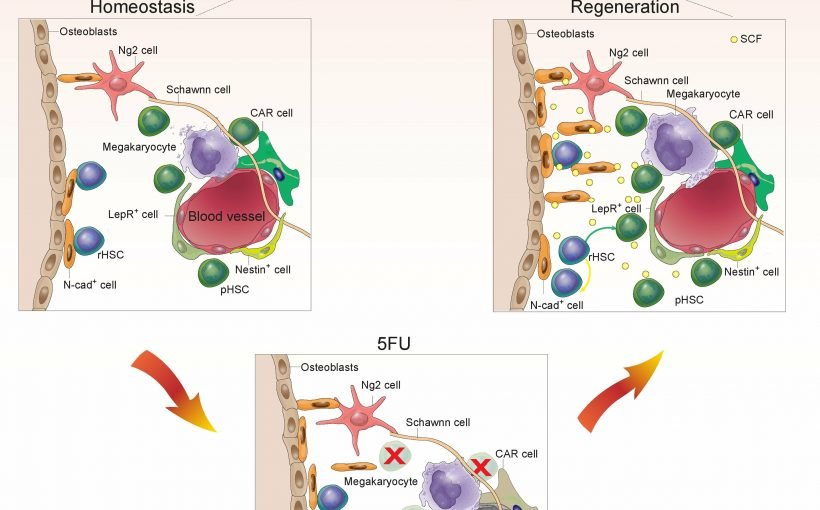 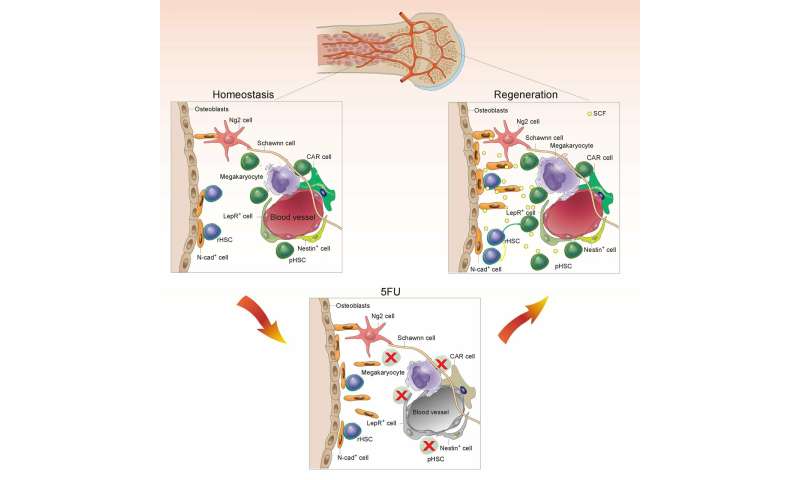 New research from the Stowers Institute for Medical Research has identified the backup for an important biological system—the hematopoietic system, whose adult stem cells constantly replenish the body’s blood supply.

The finding provides evidence that hematopoietic stem cells (HSCs) consist of different functional populations of cells, including “primed” cells, which are ready at a moment’s notice to be activated to produce red blood cells, white blood cells, and platelets, and “reserve” cells, which come into play when there has been damage to the first-line stem cells.

“Under severe stress—radiation or chemotherapy that injures blood cells, including primed hematopoietic stem cells—that’s when reserve cells kick in,” says Linheng Li, Ph.D., an Investigator at the Stowers Institute and senior author of the study.

Reserve HSCs could hold the key to understanding how blood cells repopulate after severe injury depletes the bone marrow that produces blood cells. This concept may provide an insight for understanding treatment-resistant leukemia cells. The study appears online January 15, 2019, in the journal Cell Reports.

Every second, two million new blood cells are churned out by the amazing, regenerative HSCs that reside in the core of most bones. Only a fraction of these cells actively move through the cell cycle at any given time; the rest lie in an inactive or quiescent state, which was once believed to protect them from harm. However, several studies have shown that the majority of these quiescent HSCs are sensitive to DNA damage from chemotherapy.

Over a decade ago, Li suggested that a special population of HSCs that are resistant to damage might still reside in the bone marrow, hidden in some unexplored niche. In this study, Meng Zhao, Ph.D. (now a faculty member at Sun Yat-Sen University in Guangzhou, China), Fang Tao, Ph.D., Zhenrui Li, Ph.D. (now a fellow at St. Jude Children’s Research Hospital), Aparna Venkatraman, Ph.D., and Xi C. He, M.D., undertook a series of experiments using a mouse model to prove that these cells exist.

A key experiment utilized a cell surface marker to isolate reserve and primed HSCs. The researchers transplanted reserve HSCs or primed HSCs into recipient animals. After the engraftments were established, they treated recipient mice with the chemotherapy agent 5-fluorouracil (5-FU). While the primed HSCs reflected by their derived blood cells began to decline after treatment, the reserve HSCs’ derivatives were unscathed. “In effect, we showed that hematopoietic stem cells have functionally distinct subpopulations—one that acts under normal conditions, and the other that acts under times of stress,” says Li.

Next, the researchers examined bone and marrow from transplanted mice, labeling the reserve cells with fluorescent tags and studying them microscopically to pinpoint their location in the bone marrow. With Sarah Smith, Ph.D., from the Stowers Microscopy Center, they spotted the fluorescently labeled cells lurking in a specialized niche along the inside surface of the bone, adjacent to a population of cells known as N-cadherin+ bone-lining cells, which was reported by the Li team in 2003 as the first niche identified to support HSCs. In the current study, Tao and colleagues found that these N-cadherin+ bone-lining cells are mesenchymal or skeletal stem cells with the potential to produce bone, cartilage, and fat. Therefore, N-cadherin may be used as a marker to isolate skeletal stem cells and may have potential uses in bone and cartilage regenerative medicine.

These N-cadherin+ bone-lining cells appear to protect the reserve cells from injury by feeding them survival factors like the aptly named stem cell factor and others. When the researchers depleted these support cells, the reserve cells were no longer able to survive chemotherapy treatment.

Blood-forming adult stem cells reside deep in the bone marrow and are responsible for regenerating the body’s blood supply including red blood cells, white blood cells, and platelets. In a study published online January 15, 2019, in the journal Cell Reports, Stowers Institute for Medical Research scientists from the laboratory of Linheng Li, Ph.D., and collaborators investigated how these cells, despite being sensitive to DNA damage, manage to repopulate blood cells after chemotherapy or injury has depleted their numbers.