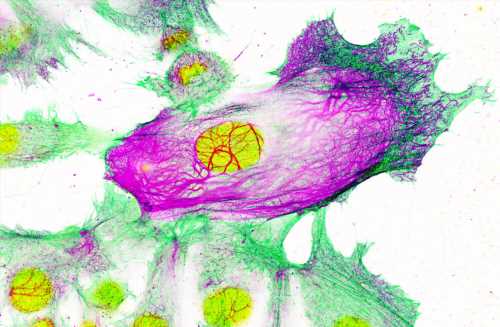 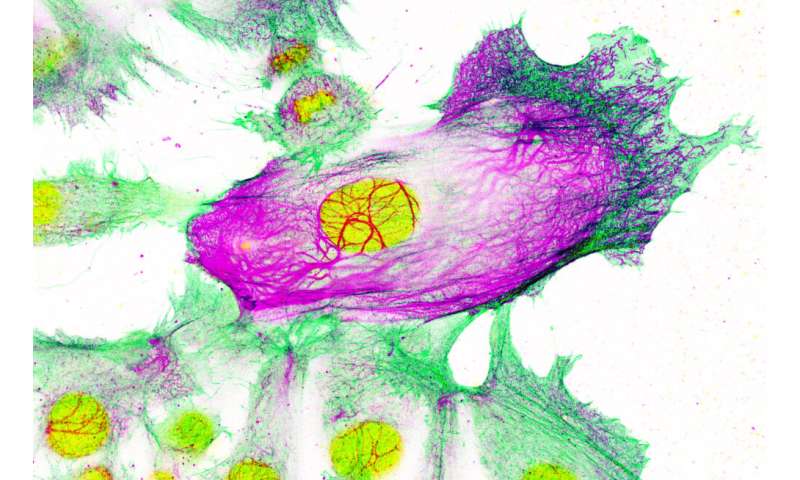 The early-stage research, led by scientists from Imperial College London and The Institute of Cancer Research, London, identified a genetic ‘switch’ in breast cancer cells that boosts the production of a type of internal scaffolding.

This scaffolding is a type of protein, called Keratin-80, and related to the protein that helps keep hair strong. Boosting the amount of this scaffolding makes the cancer cells more rigid, which the researchers say may help the cells clump together and travel in the blood stream to other parts of the body.

The team found the same switch is involved in breast cancer cells becoming resistant to the medication (meaning the drugs are no longer effective if the cancer returns).

Targeting this switch with a different drug could help reverse this resistance, and make the cancer less likely to spread, explained Dr. Luca Magnani, lead author of the research from the Department of Surgery and Cancer at Imperial: “Breast cancer is the most common cancer in the U.K., and causes 55,200 new cases every year. Aromatase inhibitors are effective at killing cancer cells, but within a decade post-surgery around 30 per cent of patients will relapse and see their cancer return—usually because the cancer cells have adapted to the drug. Even worse, when the cancer comes back it has usually spread around the body—which is difficult to treat.”

Dr. Magnani said: “Up until now we didn’t know the reasons behind this, but our early-stage study suggests a type of genetic switch—called a transcription factor—can turn on genes that cause the cancer cells to not only become resistant to the treatment, but move into health tissue around the body. This research now needs to be followed up with larger studies, but if confirmed, targeting this genetic switch could prevent cancer cells from becoming resistant to the drugs, and from spreading to other areas of the body.”

Aromatase inhibitors are used to treat a type of breast cancer called oestrogen-receptor positive. These make up over 70 per cent of all breast cancers, and are fueled by the hormone oestrogen.

These cancers are usually treated with surgery to remove the tumour, followed by a course of targeted hormone therapy—usually either aromatase inhibitors or the drug tamoxifen, which blocks oestrogen receptors.

Aromatase inhibitors are usually given to post-menopausal women, and prevent oestrogen from being produced in other tissues. Although the women’s ovaries have stopped producing oestrogen, some of the hormone is still made in several other tissues by an enzyme called aromatase. The medication prevents this enzyme making oestrogen.

However, around 30 per cent of breast cancer patients taking aromatase inhibitors see their cancer eventually return. This returning cancer is usually metastatic, meaning it has spread around the body, and the tumours are often now resistant to aromatase inhibitors.

In previous research, the same group discovered that cancer cells become resistant to aromatase inhibitors by making an alternative source of ‘fuel’. The team discovered that when aromatase inhibitors starve cancer cells of oestrogen, some cells adapt by increasing production of cholesterol, which they then use for energy to survive. This means that if the cancer returns, it can no longer be killed by the same type of drugs.

In the latest research, which used human breast cancer cell cultures in the laboratory, the research team found the switch that turns on genes that increase cholesterol production also activates genes that make the cells more rigid and prone to invade nearby tissues.

The team also found that in women whose cancers had spread around the body, the cells contained higher amounts of Keratin-80.

The team say larger scale patient studies are now needed to confirm the findings, but the research could provide new avenues for helping treat breast cancer that returns and spreads around the body.

Dr. Magnani explained: “Although the spread of cancer around the body affects many patients, scientists are still unsure about the molecular processes that drive the movement of cells. This research sheds light on this process, and also suggests it is controlled by the same switch as drug resistance. These findings need to be replicated in bigger trials, but could potential provide a way of stopping both drug resistance and cancer spread.”

Dr. Fernando Calvo, who carried out the research as Team Leader in Tumour Microenvironment at The Institute of Cancer Research (ICR), said:

“Tumour evolution is one of the biggest challenges facing cancer researchers. By working out how tumours evolve drug resistance, we can find new ways to treat the cancer effectively, or even prevent resistance developing in the first place.