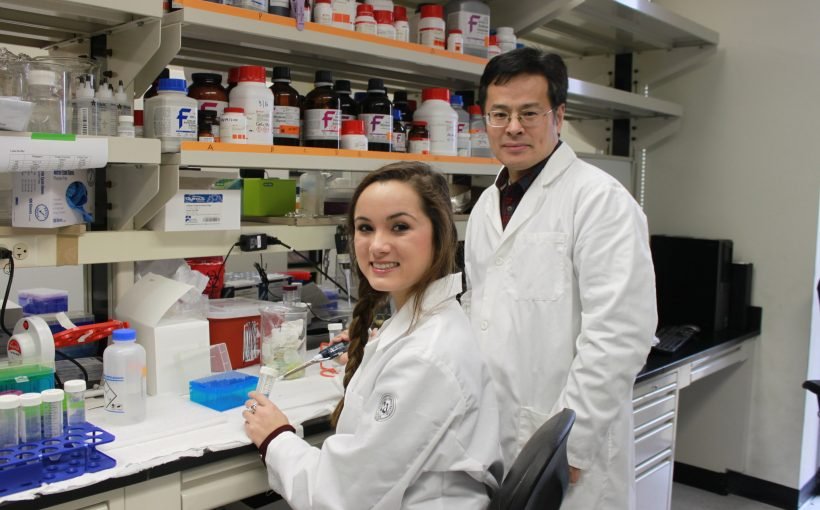 A recent study led by researchers in Texas A&M University’s department of nutrition and food science shows how a novel regulatory mechanism serves as an important biomarker for the development of diabetes, as well as a potential therapeutic target for its prevention.

The study can be found online in Diabetes, the journal of the American Diabetes Association.

“Glucagon and insulin are the most important pancreatic hormones in target tissues, such as the liver, in control of proper glucose levels in response to food intake,” explained Dr. Shaodong Guo, Texas A&M AgriLife Research scientist in the department of nutrition and food science at Texas A&M University, College Station.

During fasting, Guo said, glucagon is secreted from pancreatic a-cells to elevate blood glucose, protecting the body from hypoglycemia. Glucagon also has been tied to the development of diabetic hyperglycemia, mainly through enhancing hepatic glucose production, or HGP.

Transcription factor Foxo1, a protein that plays an important role in regulating the expression of genes, promotes HGP through increasing expression of genes encoding the rate-limiting enzymes responsible for glucose production, he said.

“Glucagon exerts its function through binding to a G-protein-coupled receptor or GCGR,” Guo explained. “When the receptor binds with glucagon it stimulates the cell membrane, which in turn activates protein kinase A, or PKA, signaling for metabolic enzymes or gene expression to increase blood glucose.”

Guo said an excess blood glucagon level is present in animals and humans with diabetes, stimulating excessive HGP and contributing to diabetic hyperglycemia.

“Disruption of proper hepatic glucose production serves as a major underlying mechanism for the development of Type 2 diabetes,” he said. “The pancreatic hormone glucagon increases HGP and insulin decreases it. Together, they control blood glucose homeostasis.”

Guo said glucose production is suppressed by insulin involved in the gene transcriptional regulation in the nucleus of liver cells, and Foxo1 is an important component of insulin-signaling cascades that regulate cellular growth, differentiation and metabolism.

“The purpose of this study was to learn what role Foxo1 plays in how glucagon regulates HGP,” he said. “We investigated the molecular and physiological mechanism of Foxo1 regulation through phosphorylation with the aim of better understanding the fundamentals of blood glucose homeostasis and the pathogenesis of diabetes.”

Phosphorylation, the attachment of a phosphoryl group, is important for protein function as this alteration activates or deactivates almost half of the body’s enzymes, regulating their function.

To establish how this Foxo1 phosphorylation would work in an animal model, the researchers used CRISPR/CAS9 technology in the generation of Foxo1 ‘knock-in’ mice to use in their investigation.

“Foxo1 is stabilized in the liver of fasting mice when insulin is decreased and glucagon is increased in the blood circulation,” he said. “Stimulating the GCGR results in the activation of adenylate cyclase, an enzyme playing key regulatory roles in essentially all cells, and produces increased levels of intracellular PKA.”

“This result, along with what we learned from some the previous research done in conjunction with the department, showed we had identified a novel molecular, cellular and physiological mechanism by which Foxo1 mediates glucagon signaling via phosphorylation to control hepatic gluconeogenesis and blood glucose,” he said.

Guo said this study further demonstrated that Foxo1 is a mediator of multiple signaling cascades and integrates different hormones and intracellular protein kinases into the programming that controls insulin sensitivity, HGP and blood glucose.