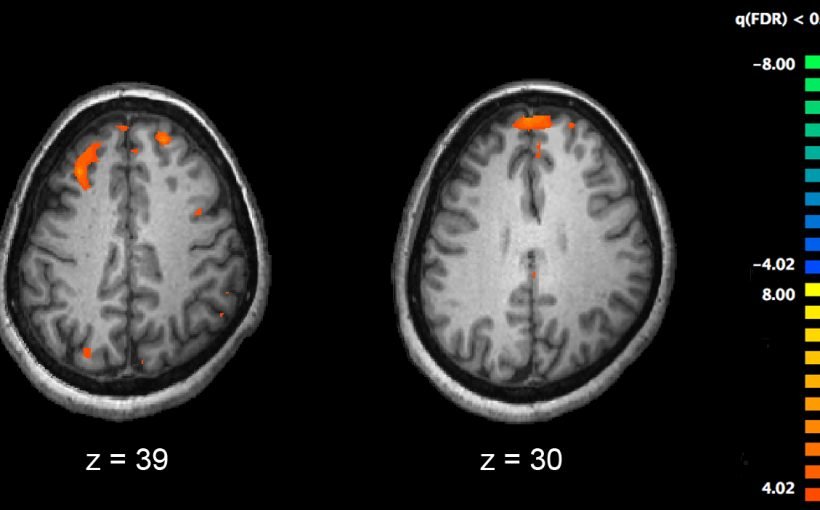 Schizophrenia is a chronic and disabling mental illness that affects more than three million Americans. Anti-psychotic medication can control schizophrenia’s psychotic symptoms, including the hallucinations and delusions that are well-known hallmarks of the disease. However, there are no effective treatments for the disease’s ‘negative symptoms’ – so-called because they involve a loss of normal function. The negative symptoms of schizophrenia include an inability to feel pleasure, a lack of motivation and difficulty with non-verbal communication. These symptoms can seriously impact patients’ employment prospects, housing, relationships and overall quality of life.

In a first-of-its-kind study, researchers at Beth Israel Deaconess Medical Center (BIDMC) used imaging data to determine the underlying anatomical cause of schizophrenia’s negative symptoms and then applied non-invasive brain stimulation to ameliorate them. The scientists found, as they reported today in the American Journal of Psychiatry, that these symptoms arise from a breakdown in a network between the brain’s prefrontal cortex and the cerebellum. Moreover, the team demonstrated that a novel type of non-invasive brain stimulation restored this crucial network’s function, which in turn improved schizophrenia’s most debilitating and treatment resistant symptoms in patients with the disease.

“There’s an enormous body of research asking how people with schizophrenia are different from people without it, but there is scant literature using imaging in people with schizophrenia to pin down the biological differences between those who are very symptomatic and those who are less so,” said lead author Roscoe Brady Jr., MD, Ph.D., assistant professor of psychiatry at BIDMC. “If we can pin down what’s different, maybe we can intervene.”

In stage one of this two-pronged study, Brady and colleagues examined functional magnetic resonance imaging (fMRI) scans of 44 patients with schizophrenia. Their analysis revealed that a breakdown in the neural connectivity between the prefrontal cortex and cerebellum was linked to more severe negative symptoms. (The network in question was not associated with hallucinations or delusions.)

“We wanted to find out if we could restore that brain circuit through non-invasive brain stimulation, and if we could, would people get better?” said corresponding author Mark Halko, Ph.D., assistant professor of neurology at BIDMC’s Berenson-Allen Center for Non-Invasive Brain Stimulation. “The answer is they absolutely do get better. It’s a very provocative finding.”

Halko, an expert in non-invasive brain stimulation, focuses on using the technology—which modifies brain activity using powerful magnetic fields—to relieve symptoms of anxiety, depression and other mental illnesses. In 2012, Halko was principal investigator on a clinical trial testing whether non-invasive brain stimulation could improve symptoms in patients with schizophrenia. But without a known circuit to explain treatment response, the study raised more questions than it answered. Then a mutual colleague introduced Brady and Halko. “When we started looking at our data sets together, we came to the conclusion that if Dr. Brady’s work could identify the networks that are responsible for these symptoms of the illness, then the brain modulation we’ve been doing could change that exact network,” Halko said. To test that idea, the researchers recruited patients diagnosed with schizophrenia, quantified and scored their negative symptom severity and conducted baseline brain imaging. Next, Halko and colleagues administered either active non-invasive brain stimulation or a sham (placebo) treatment as a control. Participants received two brain stimulation sessions per day, four hours apart, for five consecutive days.

Follow-up brain scans and clinical evaluation revealed that patients with schizophrenia who experience increased connectivity between the brain’s prefrontal cortex and cerebellum after brain stimulation also experienced a reduction in symptom severity.