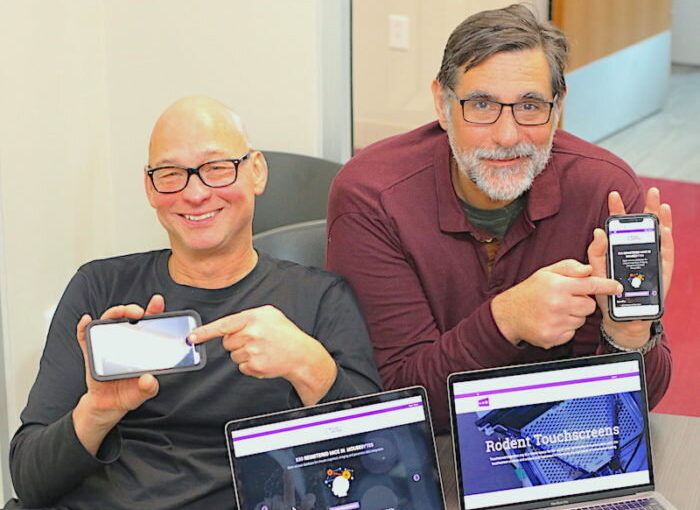 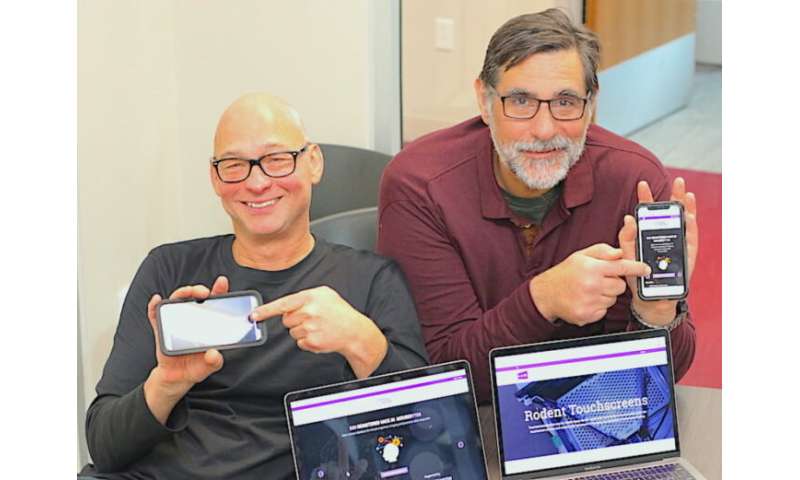 Placing collaboration above competition, Western researchers are giving 300 labs around the world the opportunity to gain a better understanding of the mouse brain in hopes of unlocking the secrets Alzheimer’s disease and other disorders in humans. Led by BrainsCAN, this is the latest and largest project undertaken by the neuroscience initiative in a push for open-science research.

“There’s an understanding that collaboration is better than competition for science,” stressed Schulich School of Medicine & Dentistry professor Tim Bussey. “It’s also the ethics of public institutions – everybody paid for this (research) – and generating data, and then hoarding it, borders on unethical. The open-science movement is huge. It’s unstoppable.”

The new www.touchscreencognition.org community, the MouseBytes database allows scientists around the world to share knowledge, information and data involving existing touchscreen cognition devices. Every research lab works with identical touchscreen technology to understand how a mouse brain operates; even though they may be working on different research, every researcher also has access to every other researcher’s methods and data.

Such sharing turns on its head the traditional way some research takes place – in discrete labs, each competing with the other and comparing data only after published.

“People will realize that collaboration is better for everyone. Especially with these technologies, you have to work together if a project is going to be successful,” said Bussey, a Robarts Research Institute scientist. “Now, instead of waiting two years for a paper, we can see the results in real time.”

“The mice do puzzles on the screen for strawberry milkshakes. They’re not reacting to (traditional tests of) chilly water or an electric shock. It’s done the same way in every lab so the tests are replicable,” Bussey said. So the files you get – and the end results – that’s almost completely standardized.”

That means a lab working with a dozen mice can have the shared information and impact of the 300 centres and almost 1,000 rodents, said Schulich professor Marco Prado, also a Robarts Research Institute scientist.

The shared technology and open science can lead to better results and faster mobilization of information than could be achieved by a single person scribing the data by hand and publishing results a couple of years later, he said. “If you start automating things, you can test 600 mice per day instead of 10 per day.”

Thanks to MouseBytes, researchers can begin assessing results in days or weeks instead of months or years.

“Collaborations happen because we’re all so good at these different things,” Prado said. “Because we have this unique capability, this allows us to attract all these collaborative efforts. There’s no other place in the world that has this touchscreen capability.”

Only weeks since it launched, the www.touchscreencognition.org has led to valuable discussions and a lively forum. “It’s not one-way (conversation). People are able to comment on it,” Bussey said.

More than a dozen researchers arrive in June for touchpads and database training sessions in advance of a symposium expected to attract 150 scientists on the subject.

In September 2016, BrainsCAN received the largest research grant in Western’s history – a seven-year, $66-million investment from the Government of Canada through the Canada First Research Excellence Fund (CFREF). Sharing and collaboration is a key part of that grant, explained Schulich School of Medicine & Dentistry professor Ravi Menon.

Last September, BrainsCAN announced the development of the world’s first open-source data sets for non-human primate brain imaging. The project’s goal is to develop a map of neural connections in the brain and lead to developing biomarkers for human mental-health and other disorders and diseases.

The database for the neuroimaging community aggregates and shares functional and diffusion MRI data sets from laboratories around the world.

Western’s offers the highest resolution scanning, Menon said, noting that while mouse touchpad technology is standardized, that’s not the case with scanners – which are made by different manufacturers with different processes and resolutions.

“We’d like to follow in the footsteps of the mouse people and adopt standard protocols” such as standard resolution and orientation of images to make them easier to analyze and compare, said Menon, BrainsCAN’s Co-Scientific Director. “The other goal (of collaboration) is if we’re going to develop Centres of Excellence and instill a culture in these centres, it has to be one in which collaboration not only exists but thrives.”