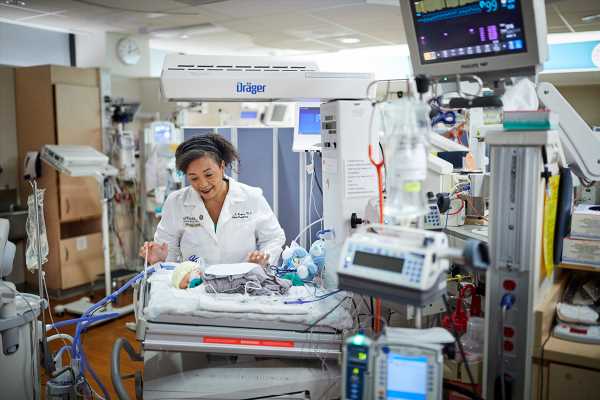 Researchers at Washington University School of Medicine in St. Louis are joining scientists at 24 other sites around the country to conduct a comprehensive study aimed at understanding how prenatal factors and early life experiences influence brain development and behavior in infants and young children.

With more than $37 million in funding from several institutes and centers at the National Institutes of Health (NIH), the HEALthy Brain and Child Development (HBCD) Study anticipates recruiting more than 7,000 pregnant women from across the country. The study is led by the NIH’s National Institute on Drug Abuse. The researchers will follow study participants through the rest of their pregnancies and the births of their children and then continue to gather data through the early childhood years. The first few years of life are a period of exponential brain growth and development.

The researchers will conduct structural and functional brain imaging studies using MRI and electroencephalogram (EEG) recordings; collect information about family histories; gather blood samples and other biological specimens; acquire data gathered by wearable biosensors; and interview and evaluate children and mothers to gather information on the social, emotional and cognitive development of the children.

“Half of the women we recruit will be typical pregnant woman with typical risk factors found in the general population,” said Cynthia Rogers, MD, a professor of child and adolescent psychiatry, and one of the principal investigators at the St. Louis study site. “For the other half, we will try to recruit women who either are using illicit substances or misusing prescription drugs or who may have other adverse exposures, such as poverty, mental health issues or other stressors. Our goal is to understand typical brain development, as well as to understand what happens when the developing brain is exposed to things that we suspect alter typical brain development.”

The HBCD study is part of the NIH HEAL (Helping to End Addiction Long-term) Initiative. The goal of the new study is to better understand the harms of prenatal and postnatal exposure to drugs and other factors in hopes of limiting or even preventing potential problems. Such issues include risk for early substance use by children, psychiatric disorders, and other behavioral and developmental problems.

Rogers, who also is associate director of the national administrative core for the 25-site consortium, will work closely with co-principal investigator Ryan Bogdan, PhD, an associate professor in the Department of Psychological & Brain Sciences, and will recruit about 300 women to participate at the St. Louis site. They’ll study the mothers and their children from before birth through at least age 4.

“We hope to look at how factors from these earliest stages of development might influence children as they grow,” Bogdan said. “We plan to comprehensively assess brain and behavior in these children, as well as environmental exposures and familial dynamics that influence development so that we can determine what prenatal and early-life factors are associated with positive and negative outcomes.”

Information gathered from the study sites will be sent to a national data coordinating center housed at Washington University for curation and analysis. Christopher D. Smyser, MD, an associate professor of pediatric neurology, is one of the national principal investigators for the national data coordinating center. The other principal investigators for this center include Damien Fair, PhD, a professor of pediatrics at the University of Minnesota, and Anders Dale, PhD, a professor of radiology at the University of California, San Diego.

“We will be collecting and performing quality-assurance activities on the data across all of the modalities from the sites — with appropriate protections to maintain confidentiality — and then we will provide both the raw and analyzed data and related analysis tools to researchers around the world,” said Smyser. “With 25 sites, our job is to ensure that we are acquiring and analyzing data across all of those sites in a way that allows us to leverage the size and strengths of the cohort, keep the scientific community intimately involved, and accurately determine the effects of exposure to illicit substances and other environmental influences.”

The investigators believe that by better understanding how adverse exposures affect brain development, it may be possible to prevent or limit damaging effects. They also expect to be able to identify factors that make some children more resilient to these exposures.

“We’ll work particularly hard to identify factors related to timing,” Rogers said. “At what point during development do certain things have the most impact — positive or negative? That’s why it’s important that this is a longitudinal study conducted over the course of several years and that a wide variety of children are represented. We want to really determine what affects brain development in both positive and negative ways.”