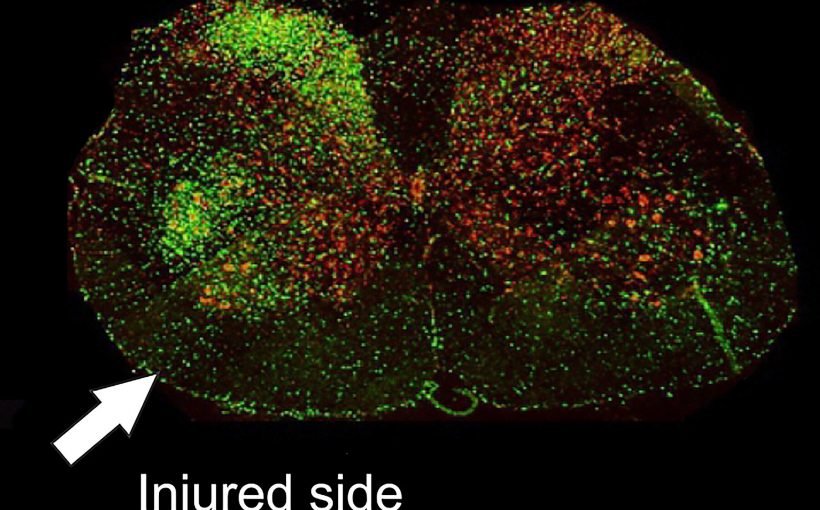 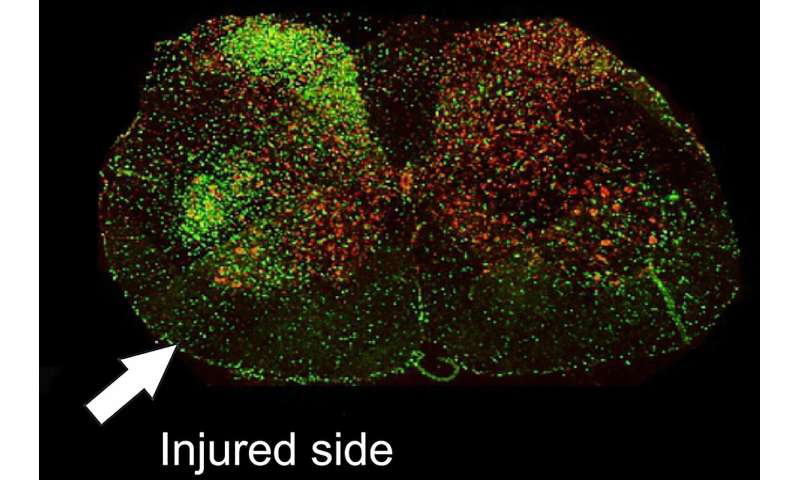 A growing collection of anecdotal stories raises the possibility that nerve injury in an arm or a leg can act as a trigger for the development amyotrophic lateral sclerosis, or ALS—a progressive neurodegenerative disease also known as Lou Gehrig’s disease, named after the famous New York Yankee who died of it in 1941.

The connection between ALS and athletes runs deeper than a single ballplayer; people who engage in intense physical activities, such as professional athletes and people in the military, are more likely to be affected by ALS. In some, the disease seems to start after an injury—muscle weakness at the site of the injury slowly spreads to new areas until weakness in the muscles responsible for breathing causes suffocation.

Now, researchers at the University of Illinois at Chicago are the first to demonstrate that a peripheral nerve injury can trigger the onset and spread of the disease in an animal model of ALS. Their findings, published in the journal Neurobiology of Disease, show that rats genetically engineered to develop ALS-like symptoms have an abnormal inflammatory response in the region of the spinal cord associated with an injured peripheral neuron. As the spinal cord inflammation and other damaging processes spread, they cause progressive muscle weakness throughout the body.

“We know that in some patients with ALS the weakness starts in a hand or leg, and the disease spreads. Coincidentally, the patient will describe a recent or remote injury to that same hand or leg that matches the location of their disease onset. We wanted to study how environmental contributions, such as a focal nerve injury, affects how the ALS starts and spreads,” said Dr. Jeffery Loeb, the John S. Garvin Endowed Chair in Neurology and Rehabilitation in the UIC College of Medicine and corresponding author of the paper.

“Our results show that a single nerve injury, which is small enough that it only causes temporary weakness in normal animals, can start a cascade of inflammation in the spinal cord that initiates and causes the disease to spread in genetically-susceptible animals,” said Loeb. “The ability to precipitate the disease through injury gives us a new animal model we can use to identify treatments for ALS that focus on stopping the spread of the disease after it first starts. The medical community has no therapies that significantly slow or stop the progression of the disease and we are currently putting all of our efforts on developing a drug to do this.”

“This raises an important question of the relative contributions of environment versus genes or nature versus nurture,” Loeb said.

One of the most highly-studied gene mutations in ALS is in a gene called SOD1. In their study, Loeb and colleagues used rats with mutated forms of the SOD1 gene, which causes the animals to have higher levels of the SOD1 enzyme and to develop ALS-like symptoms, including progressive muscle weakness, starting at 15 weeks of age.

The researchers surgically injured a single nerve in the leg of both SOD1 and wild-type rats at 10 weeks of age. While all rats had reduced strength in the injured leg post-surgery, the wild-type rats recovered almost completely within a few weeks. The SOD1 rats never returned to normal and also experienced weakness in their other leg.

They also found that surgically-injured rats had elevated and prolonged inflammation, and higher numbers of microglia and astrocyte cells in areas of the spinal cord associated with the injured neuron, and the inflammation and presence of these other cells spread to adjacent neurons.

“This spread of inflammation could potentially explain how the disease spreads once it first starts from the site of injury,” Loeb said. “Microglia have many roles, but one role is to prune or eliminate synapses that connect one nerve cell to another. These connections are critical for normal functioning and for survival of neurons during development. Where there was increased inflammation and microglia in the spinal cord, we saw up to a two-fold reduction in the number of synapses.”

Loeb explained that once a nerve loses connections with its neighbors, the neighboring cells tend to die off.