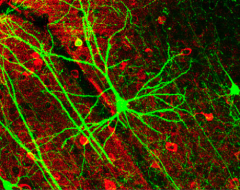 By enabling super-fast remote control of specific cells, light-activated proteins allow researchers to study the function of individual neurons within a large network—even an entire brain. Now one of the pioneers of ‘optogenetics’ and colleagues have created two new tools—protein pores which when illuminated allow Ca2+ into cells or K+ out—for switching neurons on or off using light. Published in Frontiers in Neuroscience, their study shows that these synthetic ‘ion channels’ can be used to control specific neurons, even in live animals.

Georg Nagel’s research group at the University of Würzburg combines DNA from across the kingdoms of life—from aquatic heat-loving bacteria to cows—to create hybrid ion channels that open when animated by light. Ion channels enable excitable cells like neurons to generate and transport electrical signals, by allowing charged ions to pass in and out through the cell surface.

“By engineering specific neurons to express these channels, we can switch them on and off using light,” explains Nagel.

Following the success of channelrhodopsins, another natural optogenetic ion channel ‘halorhodopsin’ was developed for use as a neuron silencer. When illuminated, halorhodopsin inhibits neuronal signals with light-induced inflow of negatively charged Cl- ions.

“Channelrhodopsins have low Ca2+ permeability, and Cl- channels like halorhodopsin can actually excite cells that have a high Cl- content. Despite a growing number of synthetic alternatives, highly-permeable light-sensitive channels that selectively allow Ca2+ into cells—or inhibit them by letting K+ out—remain high on many wish lists.”

To construct new light-activated tools for Na+/Ca2+ and K+ movement in and out of cells, the group took two existing ion channels activated by a universal cell messenger molecule called ‘cAMP’ and fused each with a bacterial enzyme that produces cAMP in response to light.

The results were a highly Ca2+-permeable channel, and a highly permeable K+-selective channel, each activated by blue light.

With collaborators Dr. Dennis Pauls from the University of Würzburg, Professor Robert Kittel and Dr. Nadine Ehmann from Leipzig University, the Nagel group set about testing these newly created channels in Drosophila (fruit fly) neurons and with Dr. Christine Gee and Ph.D. student Oana Constantin from the ZMNH Hamburg in rat neurons.

Worthy additions to the optogenetic toolkit

The authors highlight the potential drawbacks of using cAMP to mediate light-responsiveness in these channels.

“cAMP itself is an important messenger in many cell processes, so controls expressing only the bacterial cAMP-producing enzyme are needed to discriminate between the effects of light-induced cAMP, Ca2+ and K+.

“Furthermore, cAMP produced by other enzymes native to the cell could directly activate the channels. This likely explains why the fruit fly larvae engineered to express the new channels are smaller, move slightly slower, and fail to mature into adult flies.

Gao and Nagel are nonetheless confident that their latest contributions are a valuable addition to the optogenetic toolkit, worthy of further characterization and development.