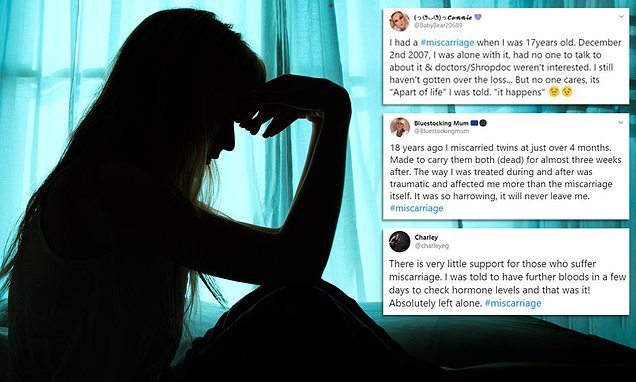 How miscarriages can REALLY affect women: Dozens who have suffered the heartbreak reveal doctors didn’t CARE and even said it was ‘just a part of life’

Dozens of women who have suffered the heartbreak of a miscarriage have today slammed the lack of care they received from doctors.

Sharing details of their devastating ordeals, many claimed their traumatic loss was so harrowing that it will ‘never leave’ them.

One woman claimed she was forced to carry her unborn twins for three weeks, and another was told her miscarriage was just ‘a part of life’.

Women shared their shocking stories in the aftermath of an Imperial College London study which found one in six who endure a miscarriage will develop PTSD.

Estimates say there are 250,000 miscarriages each year in the UK, including 11,000 ectopic pregnancies. There are almost a million in the US.

The research team behind the study – considered the largest of its kind – added that many women suffer in silence because miscarriages are ‘shrouded in secrecy’.

And the women who took to Twitter following the release of the findings, published in a journal, echoed this view. 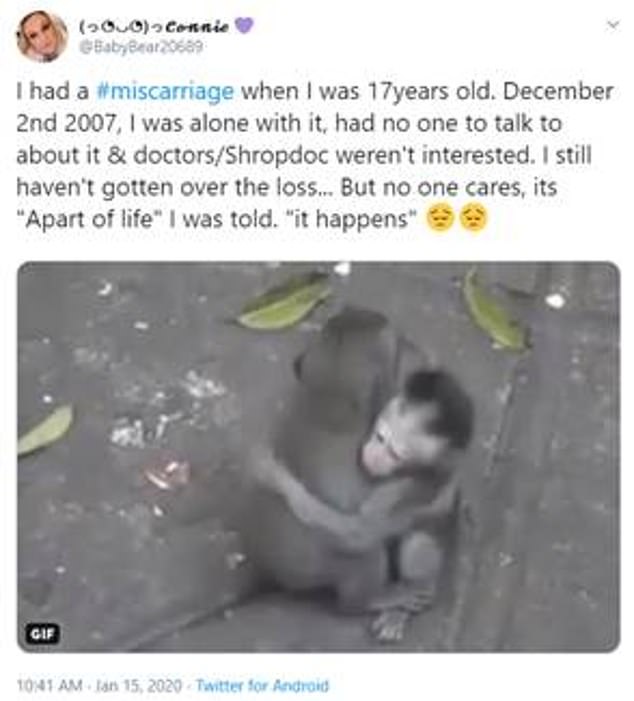 One in six women who lose a baby during pregnancy go on to endure post- traumatic stress disorder, research suggests.

The largest ever study into the psychological impact of miscarriage and ectopic pregnancies found that 18 per cent were suffering from PTSD nine months after losing their baby.

Another 17 per cent were battling anxiety and 6 per cent had depression.

The research team, led by experts at Imperial College London, said many women suffer in silence, never discussing their loss because of a culture of secrecy that surrounds miscarriage.

‘Post-traumatic stress can have a toxic effect on all elements of a person’s life – affecting work, home and relationships,’ said researcher Dr Jessica Farren, an obstetrician at Imperial.

One user, @Bluestockingmum, shockingly told how she had to carry her miscarried twins for nearly three weeks.

She wrote: ’18 years ago I miscarried twins at just over 4 months. Made to carry them both (dead) for almost three weeks after.

‘The way I was treated during and after was traumatic and affected me more than the miscarriage itself. It was so harrowing, it will never leave me.’

Another woman, @BabyBear20689, said doctors were ‘not interested’ in supporting her after she had a miscarriage aged 17.

She wrote: ‘I had a #miscarriage when I was 17years old. December 2nd 2007, I was alone with it, had no one to talk to about it & doctors/Shropdoc weren’t interested.

‘I still haven’t gotten over the loss… But no one cares, its “Apart of life” I was told. “it happens”.’

A third woman, @charleyeg, said she was merely told to have a blood test but was otherwise ‘left alone’ following her miscarriage.

She wrote: There is very little support for those who suffer miscarriage.

‘I was told to have further bloods in a few days to check hormone levels and that was it! Absolutely left alone. #miscarriage.’ 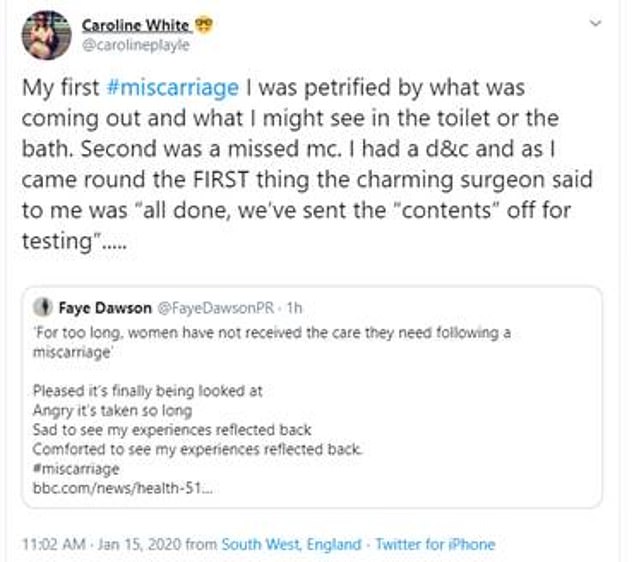 How at least one in six pregnancies ends in a miscarriage

One in six pregnancies in women who know they are pregnant become miscarriages.

But even more happen among women who don’t know they have conceived.

Miscarriage occurs when a pregnancy is lost within the first 23 weeks after conception.

The main symptoms are bleeding from the vagina, which may be accompanied by lower abdominal pain.

There are various reasons women may have a miscarriage – it is common and is not usually caused by something they have done.

If a miscarriage happens in the second trimester – between weeks 14 and 26 – it may be a sign of an underlying problem.

Often, miscarriages are isolated events and women will go on to have successful pregnancies.

The majority of miscarriages can’t be prevented, although being generally healthy will help reduce the risk.

Losing three or more pregnancies in a row – known as recurrent miscarriages – is uncommon but still affects around one in 100 women.

And Twitter user @Lauranelly95 said she had struggled ‘every day’ since her miscarriage and she was not offered support ‘because of how taboo’ the subject is.

‘It should be no surprise that this is a high possibility considering how devastating a #miscarriage is,’ she wrote.

‘I have struggled every day since mine, I was never offered support and because of how taboo it is no one even asked if me or my partner were okay.’

Other women described the horror of having to undergo a dilation and curettage operation (known as a D&C) after their miscarriages, before receiving no after care.

Chantelle Valentin wrote: ‘At 21 years old I miscarried at 12 weeks. I had DNC surgery and was sent home with no after care & no counseling.

‘My partner was abusive & left me straight after the surgery. I was so poorly & ended up with a bad womb infection that left me off work for 3 months.’

And Caroline White described being told by her surgeon after her operation that the ‘contents’ of her womb had been sent off ‘for testing’.

‘My first #miscarriage I was petrified by what was coming out and what I might see in the toilet or the bath. Second was a missed mc,’ she wrote.

‘I had a d&c and as I came round the FIRST thing the charming surgeon said to me was “all done, we’ve sent the “contents” off for testing”.’

A D&C is performed following a miscarriage in the first trimester (12 to 14 weeks) of pregnancy.

In the procedure, which is performed under general anaesthetic, the woman’s cervix is opened and the pregnancy is removed from the womb.

The women’s shocking tales of how they were treated followed the release of the research on Wednesday.

The researchers spoke to 650 women in total; 537 of them had suffered a miscarriage before 12 weeks of pregnancy.

And 116 were had developed an ectopic pregnancy.

The research showed how one month after miscarrying, nearly a third of women (29 per cent) suffered post-traumatic stress.

Lead study author Professor Tom Bourne said: ‘For many women it [miscarrying] will be the most traumatic event in their life.

‘This research suggests the loss of a longed-for child can leave a lasting legacy, and result in a woman still suffering post-traumatic stress nearly a year after her pregnancy loss.

‘The treatment women receive following early pregnancy loss must change to reflect its psychological impact, and recent efforts to encourage people to talk more openly about this very common issue are a step in the right direction.

‘Whilst general support and counselling will help many women, those with significant post-traumatic stress symptoms require specific treatment if they are going to recover fully.

‘This is not widely available, and we need to consider screening women following an early pregnancy loss so we can identify those who most need help.’

Dr Jessica Farren, another author of the study, added: ‘We have made significant progress in recent years in breaking the silence around mental health issues in pregnancy and postnatally, but early pregnancy losses are still shrouded in secrecy, with very little acknowledgement of how distressing and profound an event they are.’

‘AFTER MY FIRST MISCARRIAGE I WAS NUMB. THE SECOND TIME I COULDN’T BEAR THE GUILT OF LETTING DOWN MY FAMILY’

Kate Rawson, an actor and playwright, experienced two miscarriages in 2014 and 2015, one at eight weeks and one at 11 weeks.

She has written a radio play about recurrent miscarriage called Little Blue Lines. Here she discusses her experience:

After my first miscarriage I was numb. I did not know how to react or who to approach. I did not know if it was grief that I was feeling, or if that was even a valid response to have about losing something so ‘small’.

So I tried to believe reassuring words, ‘It’s not your fault; you can try again; you’ve got time; it’s just one of those things.’

The second time it happened I knew something was wrong immediately, just a faint pink patch in my pants, a slight cramping feeling.

Then dread and anxiety at what was to come, and guilt at what I could have done to cause it – sadness for myself, but also my husband, my family, my friends who would have to do all those sad faces and texts and calls again.

The physical miscarriage was a huge shock, one I was absolutely not prepared for and I will never forget it.

I tried to ‘move on’ as advised. ‘Trying again’ was full of anxiety that got worse when I fell pregnant for the third time.

Happily that resulted in a healthy full term birth, but the first trimester was extremely stressful, for both myself and my husband.

I struggled to keep perspective and flitted between wanting this baby more than anything else to wishing I would just bleed and get the awful thing over with and my life back.

It was only after my son was born I realized the enormity of what I had been through, and the need to process it – there are support groups at my hospital now but there was nothing available to me at the time – so I wrote about it.