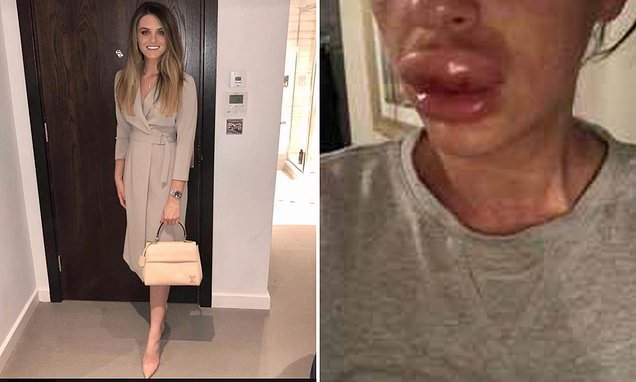 Woman, 29, saw her mouth swell to TWICE its normal size and almost lost her top lip after having fillers at a ‘Botox party’

A woman’s lips swelled to twice their normal size after she had mouth fillers at a ‘Botox party’ in a friend’s living room.

Rachael Knappier, 29, only intended to have the wrinkle-erasing injection in her forehead but, after a few glasses of Prosecco, decided to have her lips plumped at a cost of £220 at the end of August.

The beautician mistakenly injected the filler into an artery, which caused her mouth to swell within hours, cutting off the blood supply to her lips.

After being sent home from A&E, Ms Knappier, of Leicestershire, took it upon herself to contact a cosmetic-surgery expert, who warned she may lose her top lip if the tissue started to die.

Three days later, Ms Knappier was left screaming in pain while doctors injected her lips with a dissolving agent. Three months on, her mouth is almost back to its normal size. 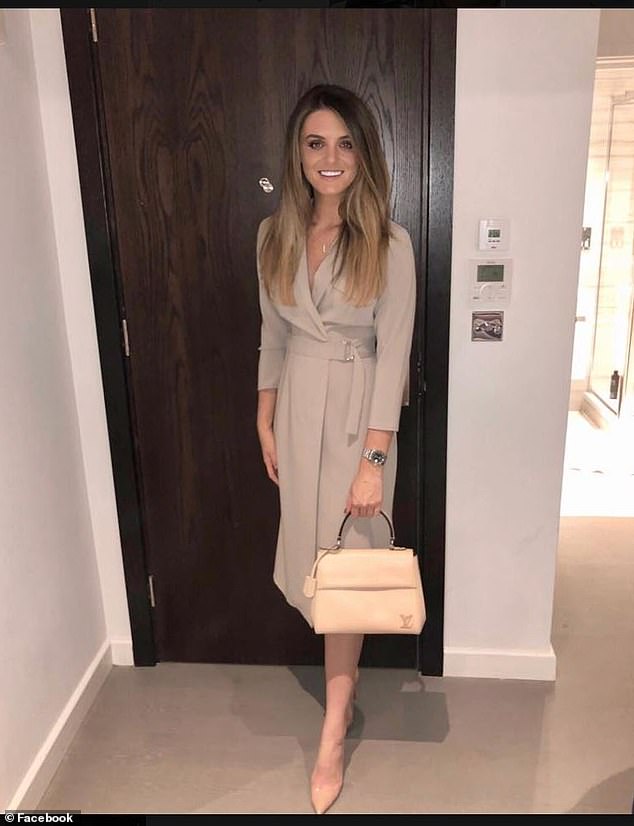 Rachael Knappier’s mouth swelled to twice its normal size after she had fillers injected into her lips at a ‘Botox party’ in a friend’s living room. Pictured before the incident, which took place at the end of August, her lips are only just getting back to normal three months later 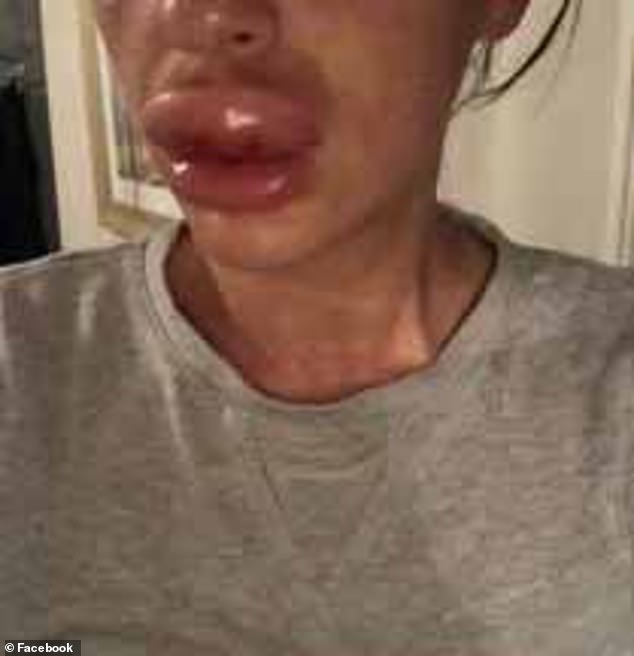 Pictured at their worst, experts told Ms Knappier the beautician likely injected the filler into an artery, which could have caused the tissue to die and meant she nearly lost her top lip

Botox and fillers make up around nine out of 10 non-surgical treatments performed in the UK, and are a multi-billion pound industry. Lip fillers cost around £300 at specialist clinics but are available on the High Street for as little as £99.

Nikki Milovanovic, a spokeswoman for the British Association of Aesthetic Plastic Surgeons, warned that although it is a prescription-only medicine, many unscrupulous ‘practitioners’ get hold of Botox online.

Legally, fillers can only be injected by a prescribing clinician or under their supervision. But Ms Milovanovic warned courses to inject fillers can take just half a day.

MOST HAVE BOTOX TO GET A ‘COMPETITIVE EDGE’ AT WORK

The boom in Botox is being driven by patients wanting to look better at work, a small survey found last August.

To get a better idea of the trend, researchers at Northwestern University polled 511 people to get an idea of what’s motivating them, in the first multi-center observational study ever performed.

They found one of the most common reasons for patients getting Botox or fillers was to look ‘better’ in a professional context, while those who wanted the procedures for themselves were in the minority

Dishearteningly, the vast majority (69.5 per cent) had turned to cosmetic surgery ‘not simply to look attractive, but to address serious psychological and emotional issues’.

Ms Knappier previously had Botox in her forehead and once had a small dose of filler in her top lip to even out a bump she has had since she hit her face against a door as a teenager.

Although she planned on getting her lip ‘topped up’, she did not intend to have the injection at the party until the beautician pointed out the bump on her lip – which Ms Knappier calls her ‘weakness’.

This combined with copious amounts of alcohol persuaded Ms Knappier to have the procedure.

‘There was fizz and cake and it was a bit of a conveyor belt with girls sitting in the kitchen waiting their turn with local anaesthetic cream on their faces,’ she told The Sun.

‘The beautician – who I assumed at the time was a nurse – didn’t ask me to sign any consent forms so alarm bells should have rung. But being at a party with friends took away all the seriousness of having filler injected into my face.’ 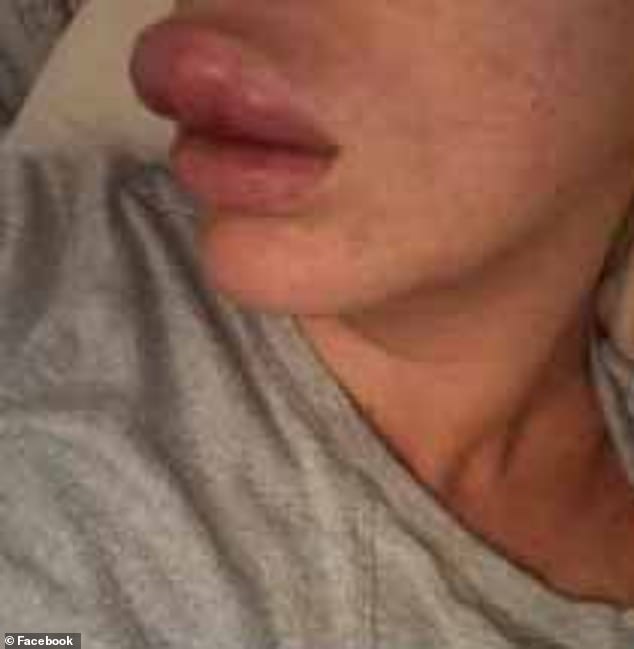 Her lips began to swell within just a few hours, which left Ms Knappier in excruciating pain 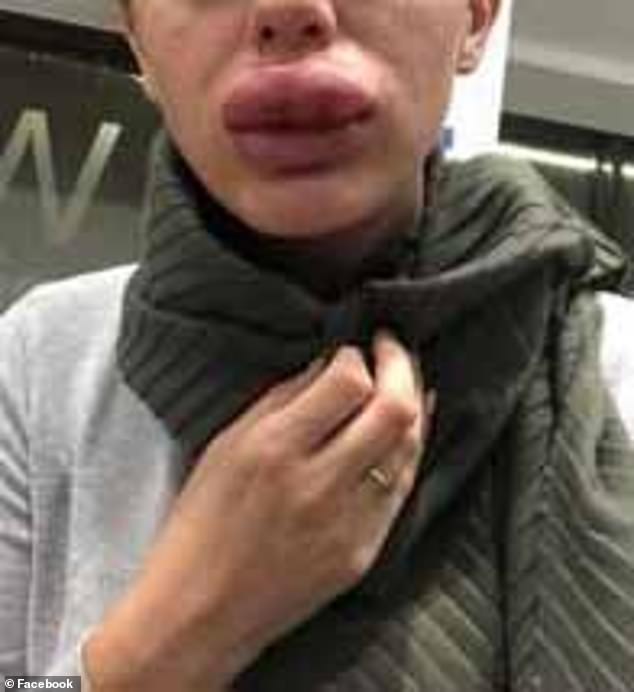 Ms Knappier rushed to A&E, where she was told it was not an allergic reaction. Wanting a second opinion, she contacted a cosmetic-surgery expert, who injected a dissolving agent into her lips while Ms Knappier cried out in pain. She has since sworn off Botox parties for life

Once the reaction set in, a panicked Ms Knappier Facetimed the beautician in distress, who told her to get to A&E. While there, doctors reportedly told her she was not having an allergic reaction and should have the filler dissolved by a beautician.

The owner reportedly told her it looked like the filler had been injected into an artery, which can kill the tissue if its blood supply gets cut off.

With her lips almost back to normal, Ms Knappier said she will never attend a Botox party again and just assumed people who inject fillers have been to medical school.

Antonia Mariconda, founder of the Safety in Beauty campaign, is urging the Government to ban non-healthcare professionals from carrying out these procedures and encourages women to seek out medical experts when having Botox. 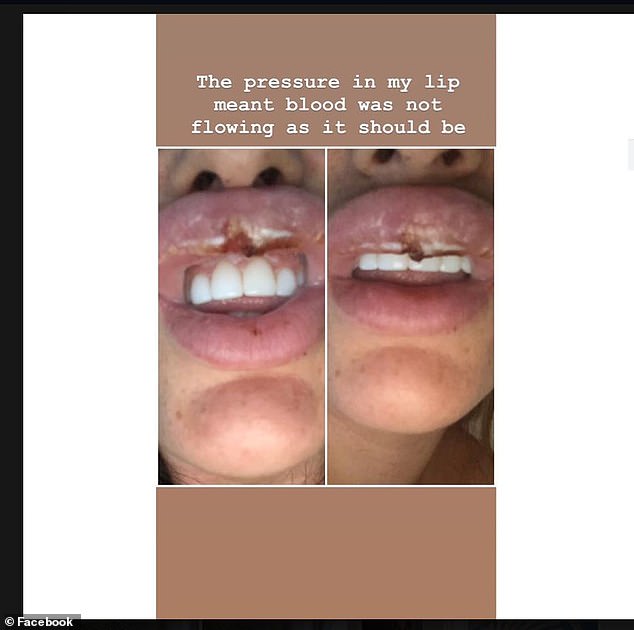 Writing on Facebook, Ms Knappier told her followers the pressure from her severely swollen lips meant her blood was not circulating as it should, which could have caused the tissue to die