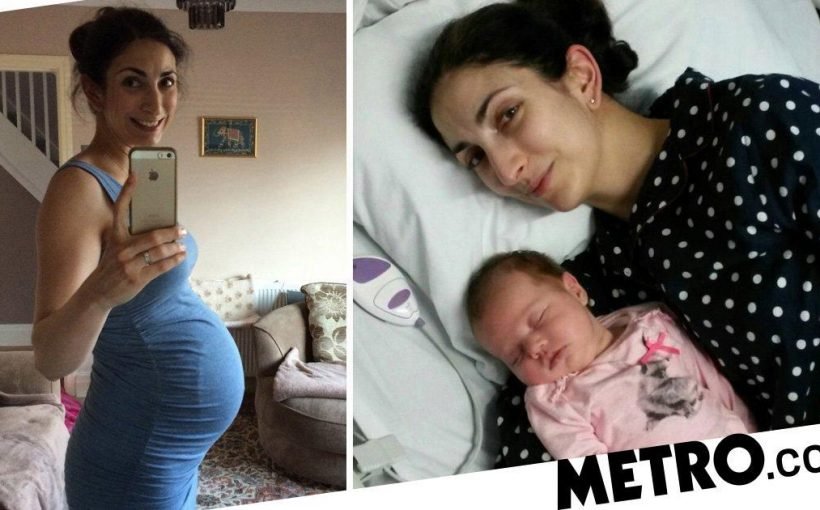 When pregnant English teacher Sima Davarian saw blood after going to the toilet, she thought it was piles – swellings inside or around the anus containing enlarged blood vessels – a common problem during pregnancy.

But when the 37-year-old from Devon, who was 35 weeks pregnant, went to the doctors, they found a small lump in her rectum and took a biopsy.

The mum-to-be said she was nervous but not worried, thinking it was pregnancy related. Unfortunately for Sima though, it turned out to be bowel cancer.

She had to wait until her baby was born to have more tests and start treatment which included a colostomy – diverting her waste into a stoma bag.

Five days after the diagnosis, their daughter Mathilda was born by caesarean, leaving both Sima and husband Michael feeling like they’d been robbed of the joys of a natural birth.

Though Sima is now cancer free, the radiation treatment she had at the start destroyed her ovaries – causing her to start menopause early.

The combination of being a cancer patient and a new mum had an exhausting physical and mental toll on Sima.

‘It was surreal, strange and traumatic,’ said Sima, ‘It was very, very difficult to become a new mother in those circumstances. In a way, it felt as if giving birth had become a medicalised experience because of the cancer.

‘Everyone was taken aback by my diagnosis. It was shocking for everyone around me, family, friends and work colleagues because they all knew I was a healthy person.

After Mathilda’s birth, doctors gave Sima a couple of weeks to recover as well as to spend quality time with her new daughter before commencing treatment to tackle the tumour.

Despite knowing it would leave her infertile and unable to have any more children, Sima followed the medical advice and had radiation therapy every day for a week, before having surgery a week later.

‘I had an abdominal perineal resection, which means surgeons took away my rectum, anus and the descending colon to make sure they removed all the cancer in a six-hour operation,’ she explained.

‘It was brutal, but we knew it was for the best. Because I was so young (34 at the time), they wanted to be as thorough as possible to ensure it could never come back.

‘But it was becoming hard to untangle being a patient from being a new mother.’

Though the idea of living with a stoma bag was difficult for Sima, she had to become used to it.

Doctors told her it was necessary not just to remove all the cancer but to make sure she goes onto live a long, healthy life.

She said: ‘The chemotherapy knocks the stuffing out of you.

‘It was a hard slog just to get up in the morning. My immune system was battered and I was running on empty.

‘That meant Michael had to be even more hands-on with Mathilda, doing the night feeds and so on. It was tough on all of us.’

For the last three years, Sima has been taking hormone replacement therapy to compensate for the loss of oestrogen.

But she has struggled to come to terms with menopausal changes such as rapid changes in temperatures and fatigue, as well as a generally low mood, which a woman does not usually experience until she hits her mid 40s to 50s.

She said it was extremely difficult for the family to get by, especially as chemotherapy often left her exhausted and unable to look after their child.

Signs and symptoms of bowel cancer

The NHS reports that more than 90% of people with bowel cancer have one of the following combinations of symptoms:

If you have one or more of the symptoms of bowel cancer, and they persist for more than four weeks, you should see your GP.

Thankfully, she has now recovered but wants more people to know that bowel cancer can affect people under 40.

‘It is very sobering to have a brush with your own mortality at such a young age,’ she added.

‘It is crucial for other young people talk about bowel cancer, which is more often associated with an older generation. It’s important to remove any stigma about it to learn to talk about uncomfortable things.’

For more details on the condition, you can visit Bowel Cancer UK.