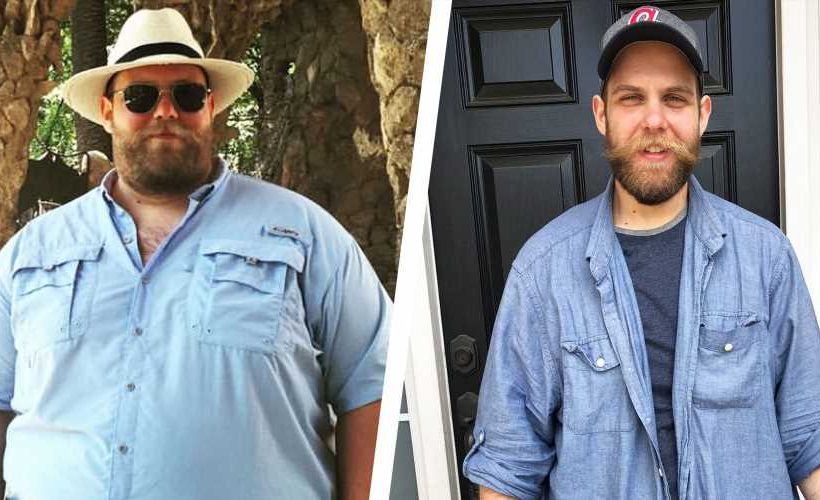 Playing youth football growing up, Nicholas Latham was usually the biggest kid on the field. At six years old, he already weighed around 95 pounds. His weight struggles continued well into adulthood: By the time he turned 30, after a bit of yo-yo dieting, Latham peaked at nearly 430 pounds.

Latham, now 32, who works as a warehouse manager in Marietta, Georgia, says diet was mostly to blame for the steady creep of weight gain. “I was single through my twenties, living alone, and eating absolutely whatever I felt like,” he says. Latham also worked night shifts, which made fast food hard to resist. “Major obesity can really creep up on you, especially when you’ve spent your whole life basically overweight,” he says. Day to day, you might not feel much different—until suddenly, you look in the rear view mirror, and you’ve added another 50 pounds.

“I thought I felt okay—especially for my weight—but in retrospect, I never really felt great,” he says. “At that size, everyday things like putting on socks or tying shoes had me out of breath and red in the face.” His turning point arrived one year when he went on vacation abroad with his girlfriend. “Eight to ten hours in an airplane seat will make anyone question their life choices,” he says. “We had an amazing trip, but there were a few times walking hilly terrain or just being outdoors more than normal that really stuck with me, and were part of my inspiration to get my act together.”

He started by fixing his diet—out with the fast food, in with the brown-bagged healthy lunches centered on veggies and lean proteins like chicken and fish. “I knew that I would start losing weight pretty quickly, so I didn’t bother tracking my caloric intake,” he says. “When progress slowed, I could either dial down my eating, dial up my exercise in time or intensity, or a little of both.”

He also began to exercise more, taking walks in the park near his home, and hit the elliptical as many nights as he could. That’s when he’d catch up on TV or listen to podcasts. “It’s a built-in reward system for putting in the time and being consistent even when progress is slow or being lazy sounds appealing,” he says.

His primary motivation, however, cut much deeper than simply wanting to look and feel healthier. “I’ve got twins turning five next month, and I wanted to be physically capable of doing anything and everything I can for them,” he says. “I want to be there to see all they do in life, and I wasn’t on a great trajectory before.”

That’s why Latham now encourages people just beginning to lose weight to find their “why.” “Losing weight isn’t rocket science, but if you don’t have a compelling reason—whatever that may be to you—it’s easy to find something else you’d rather do than eat healthy and live in the gym,” he says. “You have to find the things or people that inspire you to work at it consistently.”

Finding his “why” is why Latham now says he weighs less than he can ever recall, and he appreciates the subtle benefits—like being fit enough to buy reasonably priced clothes anywhere he wants. “Seriously, over a certain size and you are captive to a handful of retailers who specialize in big and tall,” he says. “And it is seriously difficult and expensive to dress yourself at 400 pounds.”

While he’s made a great deal of progress, however, Latham says he’s far from finished. “I’m not done yet, and I don’t think there will ever be a “done,” he says. “I think of this as more of a permanent lifestyle change than anything.” That said, there are some things he’s eager to move on from.

“I’m ready to ditch the last two years of mindless cardio,” he says. “I see barbells in my future.”