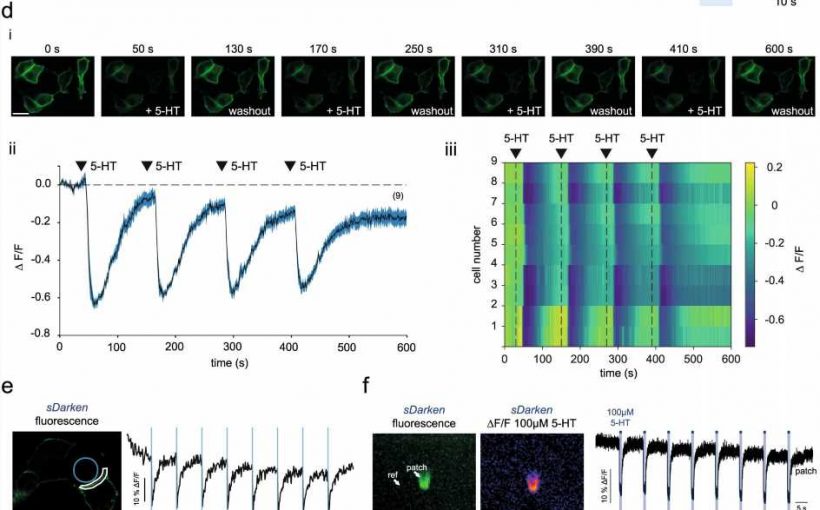 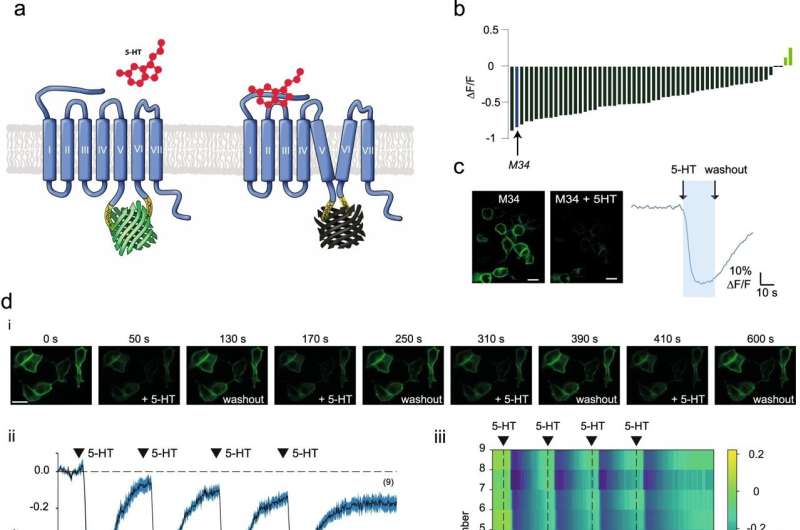 Serotonin is an important chemical messenger in the central nervous system. It falls under the category of so-called neuromodulators and is responsible for transmitting information between nerve cells in the brain and the entire body.

In particular, the assumption that anxiety and depression are caused by a serotonin deficiency in the brain regularly puts this chemical messenger in the spotlight in science. However, causal relationships between psychiatric disorders and serotonin deficiency have not yet been sufficiently described. Suitable methods have been lacking so far.

“Various genetically encoded sensors have been developed in recent years in order to monitor the release of neurotransmitters more closely,” says lead author Martin Kubitschke from the Synthetic Biology working group at the University of Bremen.

“While other teams focused on the chemical messengers glutamate, dopamine, norepinephrine, and acetylcholine, we wanted to understand exactly what functions serotonin has in the brain. When we started developing the sensors, there was no way to see serotonin live in the brain.”

The researchers use a naturally occurring human 5-HT1A receptor as the framework for the new “sDarken” sensors. The receptor was genetically modified with the help of a green fluorescent protein to develop fluorescent properties and glow green. The decisive mechanism behind this: As soon as serotonin docks at the sensors, its luminosity decreases.

Darkening thus gives a direct indication of the activity of serotonin. Since it is a genetically encoded sensor, any type of nerve cell or brain region can be equipped with this sensor to visualize serotonin dynamics.

What was remarkable was the very good resolution, which was achieved both temporally and spatially during measurements. “With the help of patch-clamp fluorometry, we were able to determine that ‘sDarken’ reacts to changes in serotonin concentration in much less than a second,” says Professor Andreas Reiner from the Faculty of Biology and Biotechnology at Ruhr-Universität Bochum.

“The fact that ‘sDarken’ is excellently positioned in the membrane of nerve cells helps us to determine the spatial activity of chemical messengers,” adds Professor Dr. Olivia Masseck, corresponding author and head of the Synthetic Biology working group at the University of Bremen. “The ‘sDarken’ sensors work so well that we expect to be able to visualize activities on individual nerve cell spines in the future.”

The sensors are extremely sensitive and specific: even the tiniest concentrations of serotonin led to an optical change in the sensors and were therefore able to be measured by the scientists. “sDarken” did not react when other neurotransmitters or similar substances were administered. In addition, “sDarken” proved to be extremely robust, photo- and pH-stable and thus fulfilled important requirements for long-term imaging.

“By means of targeted mutation, we have developed three different variants of ‘sDarken,’ which react differently to serotonin,” continues Martin Kubitschke. “It is advantageous to use a sensor with a very high affinity to detect so-called volume transfer in neurotransmitters. If, on the other hand, the focus is on serotonin secretions via individual synapses, a sensor with a lower affinity is advantageous. All these characteristics are now covered by the ‘sDarken’ sensors.”

Its properties make “sDarken” an ideal addition to existing serotonin sensors and expand the range of instruments for imaging serotonin dynamics. In cooperation with the research teams of the Ruhr-Universität Bochum (Prof Andreas Reiner), the DZNE in Bonn (Dr. Martin Fuhrmann) and the ZNMH in Hamburg (Prof Simon Wiegert), it has already been shown that even fine details of serotonin release can be observed with “sDarken” in active animals.

Olivia Masseck is therefore convinced: “The new sensors will make it possible to better understand the role and function of serotonin in the brain in the long term.”

The research is published in the journal Nature Communications.