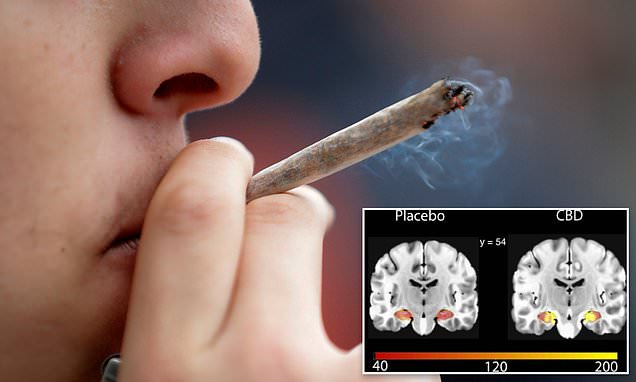 CBD DOES help the mind: Study finds that cannabidiol improves blood flow to parts of the brain associated with memory and decision-making

Just one dose of cannabidoil (CBD) was shown to improve blood flow to parts of the brain, a new small study suggests.

Researchers found that the main non-psychoactive ingredient in marijuana increased blood flow to the hippocampus, the area of the brain responsible for memories and learning.

It also increased blood flow to the part of section of the brain responsible for decision-making.

The team, from the University of College London, says the findings could offer better target therapies for those who suffer conditions that affect memory, such as Alzheimer’s disease and post-traumatic stress disorder. 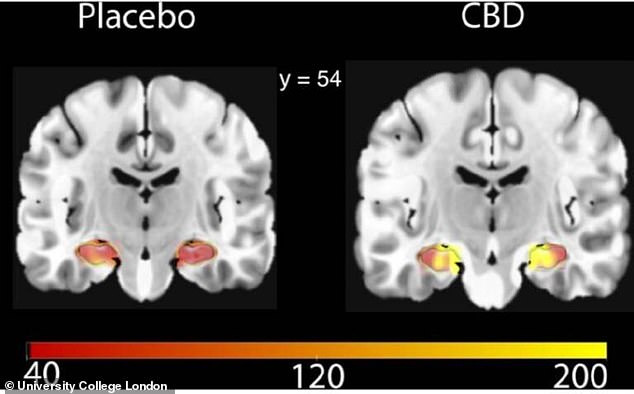 Researchers from University College London gave 15 participants with no history of cannabis use 600 mg of CBD, the main non-psychoactive ingredient in marijuana, on different occasions for a week and then 600 mg of a placebo

‘To our knowledge, this is the first study to find that CBD increases blood flow to key regions involved in memory processing, particularly the hippocampus,’ said lead author Dr Michael Bloomfield, a professor of psychiatry at UCL.

‘This supports the view that CBD has region-specific blood flow effects in the human brain, which has previously been disputed.’

CBD and tetrahydrocannabinol (THC) are both derived from the cannabis plant.

Together, they are part of the cannabinoid group of compounds found in hashish, hash oil, and most strains of marijuana.

THC is the psychoactive compound responsible for the euphoric, ‘high’ feeling often associated with marijuana.

The compound interacts with CB1 receptors in the central nervous system and brain and creates the sensations of euphoria and anxiety.

But CBD, which is non-psychoactive, does not fit these receptors well and is believed to be responsible for some of marijuana’s therapeutic effects such as pain relief.

For the study, published in the journal Journal of Psychopharmacology, the team recruited 15 young and healthy participants with no history of cannabis use.

Over the course of a week, the adults were given 600 milligrams (mg) of oral cannabis or a placebo.

Then, seven days later, they were given the capsule that they didn’t take. Participants didn’t know which capsule they were taking on each occasion.

Results showed that CBD significantly increased blood flow in the hippocampus and the orbitofrontal cortex, the latter of which plays a role in decision-making.

‘Cannabidiol is one of the main constituents of cannabis and is gaining interest for its therapeutic potential,’ Bloomfield said.

‘There is evidence that CBD may help reduce symptoms of psychosis and anxiety. There is some evidence to suggest that CBD may improve memory function.’