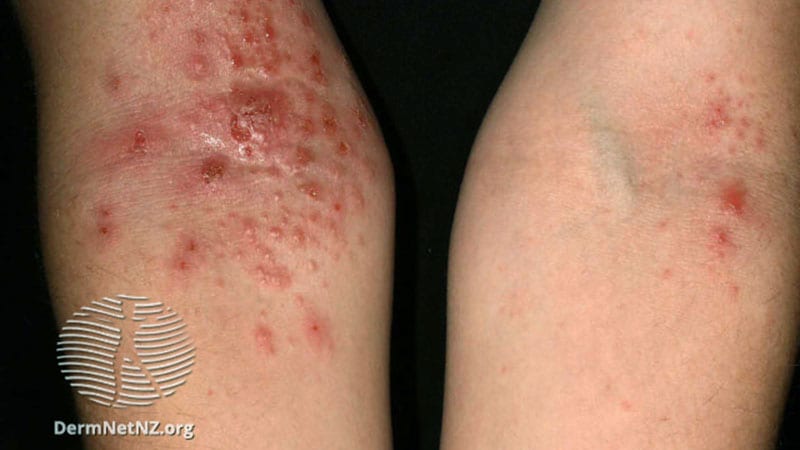 “Research has documented the disease burden of AD, including its visible nature and the effect on itch and sleep, but knowledge gaps remain,” Aaron M. Drucker, MD, of the division of dermatology at the University of Toronto, and colleagues wrote in the study published online in JAMA Dermatology. “Gaps include a poor understanding of symptoms other than itch, patients’ treatment experience, and how different elements of burden of disease interact.”

Drucker and colleagues collected data from an externally led patient-focused drug development survey on AD, a 32-item questionnaire that was administered electronically between Aug. 1, 2019, and Oct. 11, 2019. Respondents were asked to rate the overall impact of their AD in the past months and the specific elements of disease burden on a 1-5 scale, with 1 meaning no impact, and 5 meaning a significant impact. They were also asked to rate current mood changes and mood changes at the worst point of AD on a 4-point scale that ranged from “not present” to “severe.” The researchers used multivariable ordinal regression to examine associations between demographic and clinical variables and patient-reported overall AD impact scores.

Correlations between specific impact domains such as sleep, cognitive thinking, and physical activity and overall AD impact scores ranged from weak to moderate, and no individual aspect of disease burden correlated strongly with overall impact scores. The researchers observed similar results after they stratified the analysis by age, current severity, and time spent managing AD.

In other findings, 40% of study participants reported mild changes in mood related to their AD, 30% reported moderate changes, 9% reported severe changes, while the remainder reported no changes in mood. The variable most strongly associated with current mood changes was having severe AD at the time of the survey (OR 5.29).

“Atopic dermatitis is associated with an immense clinical burden,” said Raj Chovatiya, MD, PhD, assistant professor in the department of dermatology at Northwestern University, Chicago, who was asked to comment on the study. “However, our understanding of disease burden from the patient perspective is limited,” he added.

“Interestingly, no single specific element of disease burden was strongly correlated with overall burden, further supporting the complex, multidimensional nature” of the impact of AD, he said, noting that the study “highlights the need for clinicians to look beyond the skin when it comes to AD and underscores the need for additional research to better understand the patient and caregiver perspective.”

Zelma Chiesa Fuxench, MD, MSCE, assistant professor of dermatology at the University of Pennsylvania, Philadelphia, who was also asked to comment on the study, noted that aside from the well discussed impact and burden of itch and its impact on sleep loss, much remains to be learned about the full impact of AD, particularly among adults.

“For example, it is commonly accepted and expected that patients with more severe AD likely experience higher disease burden, but are there other factors that can influence this risk?” she asked. “Can we explain the high impact of AD disease aside from the level of disease severity, particularly among adults with AD?”

The study, she added, “is important because it provides additional insights into those possible factors, including ‘time spent managing their disease’ and ‘associated depression.’ In particular, understanding the association between ‘time spent managing their disease’ and higher disease burden is critical because, in my opinion, it emphasizes the need to develop better strategies for improving the care of patients with AD including the development of more efficacious and safer treatment strategies.”

Drucker and colleagues acknowledged certain limitations of the analysis, including its cross-sectional design, the potential for selection bias, and the fact that it did not use the patient-oriented outcome measure or the dermatology life quality index. “Further work to address the complex burden of AD, including strategies to reduce time spent managing AD, and understanding the fullness of the patient experience is needed,” they concluded.

The work was supported in part by a grant from the National Eczema Association (NEA). Drucker reported that he receives compensation from the British Journal of Dermatology (as reviewer and section editor), American Academy of Dermatology (guidelines writer), and NEA (grant reviewer). Coauthors representing the NEA and other patient organizations including the Allergy & Asthma Network, Asthma and Allergy Foundation of America, Global Parents for Eczema Research, and International Topical Steroid Awareness Network received organizational grants (Pfizer) and sponsorship funding for these analyses from AbbVie, Eli Lilly, Incyte, LEO Pharma, Regeneron Pharmaceuticals, and Sanofi Genzyme.

Chiesa Fuxench disclosed that she has received research grants from Lilly, LEO Pharma, Regeneron, Sanofi, Tioga, and Vanda for work related to AD She has served as consultant for the Asthma and Allergy Foundation of America, NEA, AbbVie, Incyte Corporation, and Pfizer; and received honoraria for CME work in AD sponsored by education grants from Regeneron/Sanofi and Pfizer.

This story originally appeared on MDedge.com, part of the Medscape Professional Network.