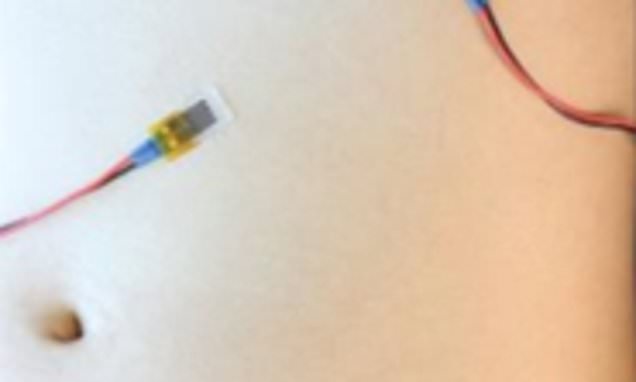 Could this smart sticker save asthmatics from attack? Patch measures movement of the ribs and sends warning to your PHONE if your breathing gets worse 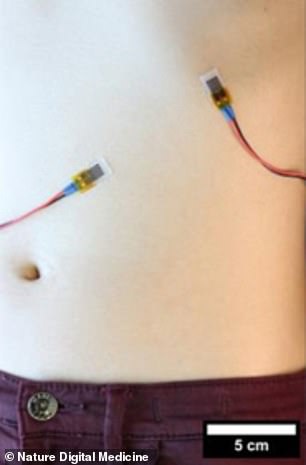 A sticker asthmatics wear on their skin could warn when an attack is looming, research suggests.

When worn on the abdomen, sensors in the sticker measure the strain being put on a user’s rib cage.

Asthma attacks occur when the muscles around the airways tighten, leading to difficulty breathing, wheezing and coughing.

Although still being developed, the researchers believe the sensors could connect to a user’s smartphone, urging them to seek help.

The research was carried out by the University of California, Irvine, and led by Michelle Khine, a professor of biomedical engineering.

COPD defines a group of lung disorders that cause breathing to become increasingly difficult and affect everyday life.

Together, the two disorders affect more than 435million people worldwide, the researchers wrote in the journal Nature Digital Medicine.

Asthma is a common but incurable condition which affects the small tubes inside the lungs.

It can cause them to become inflamed, or swollen, which restricts the airways and makes it harder to breathe.

The condition affects people of all ages and often starts in childhood. Symptoms may improve or even go away as children grow older, but can return in adulthood.

Symptoms include wheezing, breathlessness, a tight chest and coughing, and these may get worse during an asthma attack.

Treatment usually involves medication which is inhaled to calm down the lungs.

Triggers for the condition include allergies, dust, air pollution, exercise and infections such as cold or flu.

If you think you or your child has asthma you should visit a doctor, because it can develop into more serious complications like fatigue or lung infections.

Although both conditions can be controlled, patients have to stay on top of their health and seek medical help if they experience symptoms.

Exiting monitoring tests are bulky or require complicated technology, which makes them unsuitable for at-home use.

The sticker – which has ‘a footprint smaller than a typical Band-aid’ – measures the number of breaths taken per minute.

It also records the amount of air that is inhaled and exhaled per breath.

It does this simply by measuring the strain on the user’s rib cage and abdomen during breathing.

When tested on eight healthy adults while they rested, the results were ‘highly correlated’ to medical devices that are only available in hospitals.

And because the sticker contains sensors that can be integrated into wireless Bluetooth devices, it could monitor patients with chronic lung conditions at home.

Although promising, the researchers stress further studies are required that are made up of lung disease sufferers.

The sticker should also be tested while the participants are out and about to better reflect ‘daily environments’, they add.