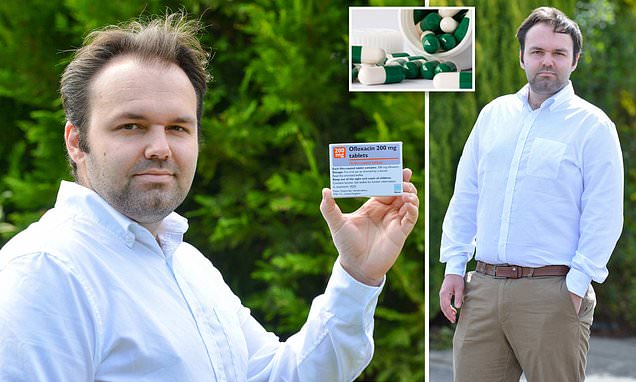 Tinnitus, nerve damage and a racing pulse from just TWO antibiotic pills… Despite warnings, some doctors are still prescribing drugs that can leave patients with crippling side-effects

After being prescribed antibiotics for a suspected urinary tract infection (UTI), Adam Sawczuk was expecting to bounce back to health within days.

He’d had stabbing pain and a dull ache in his groin for more than a week.

‘I wasn’t happy about this because the type of infection hadn’t even been confirmed yet. I knew certain bacteria only respond to specific drugs, so wanted to wait to confirm. But my GP said I should take a course of ofloxacin or have the same drug via an IV drip in hospital to prevent the infection worsening.

‘Within hours I felt nauseous and became extremely sensitive to noise. I stayed still, and my symptoms settled after a few hours, so I took a second tablet. I woke that night with my heart racing — my exercise tracker showed my heart rate was 160 beats per minute, the same as when I’m running.’ 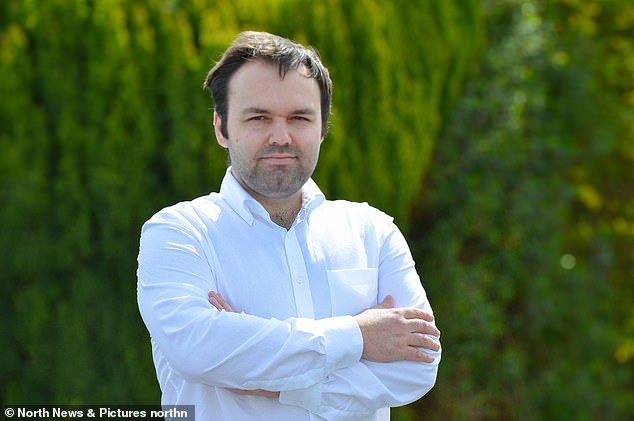 After being prescribed antibiotics for a suspected urinary tract infection (UTI), Adam Sawczuk was expecting to bounce back to health within days

The next day, more symptoms kicked in — including crippling lower backache and nerve pain — and, after reading about the drug’s side-effects, Adam decided not to take any more ofloxacin tablets.

‘It felt like my body was on fire,’ he says. ‘I couldn’t walk properly as my back was so painful. I rang my GP and they said it was my infection and sent me to A&E.’

He continues: ‘The doctor there was dismissive when I suggested my symptoms could be a side-effect of the antibiotics. Instead, he wanted me to take more drugs — gabapentin for nerve pain and sleeping pills — but I refused. I know that those drugs can have side-effects, too.’

Adam went home, but over the next few days the nerve pain intensified, he developed tinnitus, and his heart rate was racing and then plunging. ‘My dad took me back to A&E a couple of days later,’ he says. ‘I’d gone from running long distances to being unable to walk up the stairs.’

Fluoroquinolones and quinolones are antibiotics that work against bacteria such as salmonella, E.coli and pseudomonas (which cause lung infections and UTIs). They include ciprofloxacin, levofloxacin, moxifloxacin, norfloxacin and ofloxacin — the drug Adam took.

There are fears these are over-prescribed because it is estimated that in between 1 per cent and 15 per cent of cases they cause serious side-effects including tendon problems, such as Achilles tendon rupture, and nerve, joint and muscle pain. Other side-effects reported include fatigue, tinnitus and cardiac symptoms. These effects are believed to be caused by the drugs damaging the mitochondria — a cell’s ‘engines’ — affecting repair to muscles, ligaments, tendons and nerves. 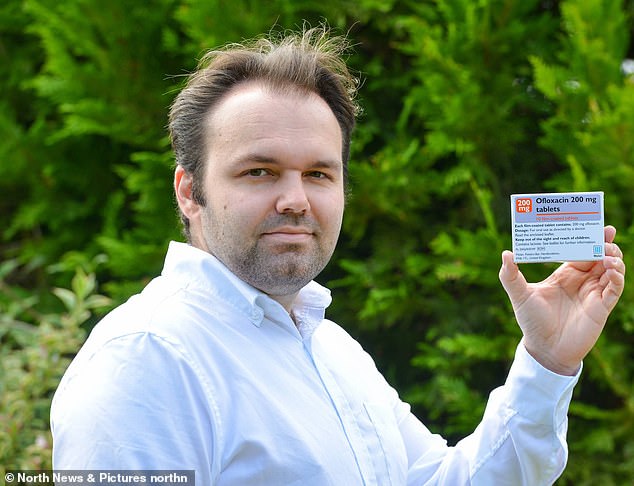 He’d had stabbing pain and a dull ache in his groin for more than a week. ‘My GP decided to prescribe stronger fluoroquinolone antibiotics [called ofloxacin (pictured)] after a seven-day course of a milder antibiotic [doxycycline] hadn’t worked,’ says Adam, 32

Good Health first reported on these adverse side-effects in 2012, and in 2018 drug safety authority the European Medicines Agency (EMA) finally held a public hearing in London to take evidence from medical experts and affected patients.

In March last year, the Medicines and Healthcare products Regulatory Agency (MHRA) issued guidance stressing that quinolones and fluoroquinolones should not be used to treat minor infections.

However, Good Health has discovered that fluoroquinolones are still being widely prescribed.

There were 589,116 prescriptions dispensed in 2019, according to NHS Digital, just less than 2 per cent of the 35 million antibiotics prescribed every year. And there have been more than 2,000 reports of adverse drug reactions (ADRs) for fluoroquinolones since 2014. Most ADRs are not reported. 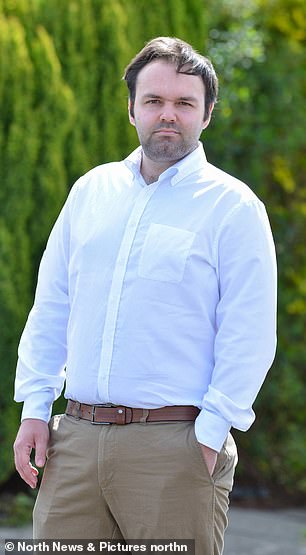 Adam, 32, is an NHS psychologist who lives in Carlisle, Cumbria

Adam says: ‘I told an A&E consultant that I’d read about fluoroquinolone toxicity side-effects in the scientific literature and was a health professional, and said I was convinced that was the cause.

‘The doctor agreed to order the tests for high levels of inflammatory markers and low magnesium — signs of fluoroquinolone toxicity — and the results fitted. My dad and I were so relieved, we both cried.’ But his problems weren’t over, and within weeks he needed a wheelchair.

After two months, Adam contacted Dr Neal Millar, an orthopaedic surgeon and scientist at the University of Glasgow — one of only two doctors in the UK who specialises in fluoroquinolone toxicity — and has made a gradual recovery with specialist physio.

An MHRA spokesperson says: ‘Following an EU-wide review, prompted by reports of disabling and long-lasting adverse reactions, including those affecting the muscles, joints and nervous system, the use of fluoroquinolone antibiotics in the UK has been restricted to serious, life-threatening bacterial infections.’

The guidance advises patients to stop treatment at the first signs of an adverse reaction.

Dr Millar says: ‘I am still seeing the same number of patients for side-effects of fluoroquinolones as I did before guidance was issued. I think the guidance has helped more patients get referrals for investigations to specialists. But I don’t think it has had impact in terms of the infections for which quinolones are prescribed.

SCREEN TIME: How what you watch affects your health

Watching old Disney films can reduce negative feelings in patients undergoing physically demanding treatment, according to a study published in May on the JAMA Network Open platform.

The researchers, from the Medical University of Vienna, in Austria, compared the responses of two groups of patients having chemotherapy. Each patient filled in a questionnaire about their mood, energy levels and feelings. The patients who watched the films felt less worried about their situation after treatment than those who didn’t watch the films.

‘Watching Disney films, particularly those you saw as a child, reminds you of a time when you had fewer worries — and that can help take you away from causes of stress,’ says Bernie Wooder, a psychologist in Hertfordshire.

‘On top of that, many films, such as Disney’s The Little Mermaid, can have a theme of hope, strength and overcoming negativity. This can have a powerful effect on our own feelings.’

‘GPs are busy and this guidance could have been missed,’ he adds.

(In his evidence to the EMA, Dr Millar argued that the complication rate was not 1 per cent, as reported, but up to 15 per cent, and so quinolones should only be prescribed for the most serious cases in hospitals, but this was rejected by the EMA and the MHRA.)

An MHRA spokeswoman told Good Health that a letter highlighting the new guidance was sent to thousands of GPs and hospital doctors in March 2019. A drug safety alert was published and an urgent safety message was sent to liaison officers in all NHS trusts.

Separately, Dr Millar is concerned that patients who have had adverse effects ‘are often told there is no treatment, but this is not true — we can treat symptoms such as tendon problems, for instance, with specialist graded physiotherapy’, he says.

Dr Millar is working on a research project on quinolone toxicity with Professor Sir Munir Pirmohamed, NHS chair of pharmacogenetics and director of the Centre for Drug Safety Science at Liverpool University. Professor Pirmohamed says: ‘What has been discovered more recently is that patients can be affected by multi-system side-effects, including memory problems, nerve pain, lethargy and fatigue.’

Two years on, Adam still suffers from pain, joint problems and tinnitus, but can walk again — and is hoping to return to work next year. He brought a complaint about being prescribed a fluoroquinolone antibiotic, but it was rejected by NHS England. He intends to appeal to the Ombudsman.

He says: ‘My big fear is that there are so many other people whose symptoms are dismissed.’ 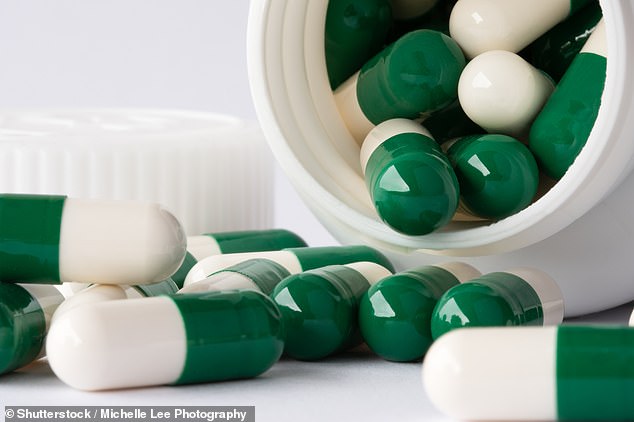 Fluoroquinolones and quinolones are antibiotics that work against bacteria such as salmonella, E.coli and pseudomonas (which cause lung infections and UTIs) (file image of generic pills)