Singing may reduce stress and improve mood for people with Parkinson’s disease, a new study suggests.

Researchers say that belting out a song in a group could provide benefits beyond improving respiratory and swallow control in Parkinson’s patients.

Just one hour was found to decrease heart rate and blood pressure, as well as improve neurological symptoms such as finger tapping, similar to the benefits of taking medication.

But the team, from Iowa State University, says its findings show that therapeutic singing could be a more accessible and affordable treatment option for Parkinson’s patients. 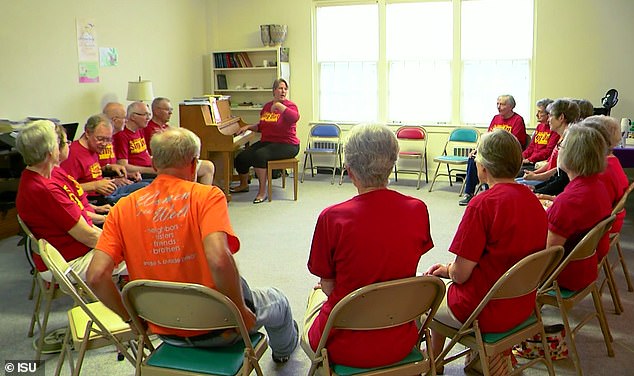 For the study, the team looked at 17 Parkinson’s patients who were part of a therapeutic singing group.

The researchers measured the participants’ heart rate, blood pressure and levels of cortisol, also known as the ‘stress hormone’.

The patients were also asked to report on feelings of anger, anxiety, happiness and sadness. Data was collected prior to a one-hour singing session and immediately following it.

Results showed that heart rate, blood pressure and cortisol levels were reduced after the class.

WHAT IS PARKINSON’S DISEASE?

It develops gradually, sometimes starting with a barely noticeable tremor in just one hand.

But while a tremor may be the most well-known sign of the condition, it also commonly causes stiffness or slowing of movement.

Between seven and 10 million people globally have the disease.

Of those, the majority of cases have no known cause although scientists suspect a mix of genetic, epigenetic and environmental factors.

Parkinson’s disease cannot be cured, but medications can help control symptoms, often dramatically. In some later cases, surgery may be advised.

Scientists said that, although there were no significant changes in feelings of happiness or anger, the group members did report feeling less anxious and sad after the singing session.

‘We see the improvement every week when they leave singing group,’ said Dr Elizabeth Stegemöller, an assistant professor of kinesiology at Iowa State.

‘It’s almost like they have a little pep in their step. We know they’re feeling better and their mood is elevated.’

She adds that while the findings are preliminary, the improvements among the patients resembled the benefits of taking medication.

‘Some of the symptoms that are improving, such as finger tapping and the gait, don’t always readily respond to medication, but with singing they’re improving,’ said Dr Stegemöller.

Researchers are encouraged by the results, but they still have to find the mechanism steering the behavioral changes.

‘Part of the reason cortisol is going down could be because the singing participants feel positive and less stress in the act of singing with others in the group,’ said Dr Elizabeth Shirtcliff, an associate professor in human development family studies at Iowa State.

The team next plans to analyze patients’ blood samples to measure levels of oxytocin, a hormone that plays a role in social bonding.

They will also be looking at changes in inflammation – which is an indicator of the progression of Parkinson’s – and neuroplasticity – the ability of the brain to change – to see if singing benefits these factors.

‘We’re also looking at heart rate and heart rate variability, which can tell us how calm and physiologically relaxed the individual is after singing,’ said Dr Shirtcliff.

The new study builds upon the team’s previous research, which found that singing improved respiratory control and the muscles used for swallowing in Parkinson’s patients.

Currently, there are between 50,000 and 60,000 cases diagnosed in the US every year. However, the prevalence is expected to double over the next 20 years.

According to the Parkinson’s Foundation, that means there will more people living with the disease in the US than the combine number of people diagnosed with multiple sclerosis, muscular dystrophy and Lou Gehrig’s disease.

In July, actor Alan Alda was diagnosed with Parkinson’s. He said his advice was to ‘keep moving’.

‘I’m taking boxing lessons three times a week. I do singles tennis a couple of times a week. I march to Sousa music because marching to music is good for Parkinson’s,’ he told CBS This Morning.

PARKINSON’S PATIENT FOUND HER VOICE IN A SINGING CLASS

A Parkinson’s patient credits singing classes for helping her continue to speak after she was diagnosed with the disease 13 years ago.

Jacquelyn Manatt, from Ames, Iowa, is in a therapeutic singing group started by Dr Stegemöller.

Manatt was diagnosed with Parkinson’s in 2004 and began attending the sessions in 2015.

She says singing has helped her project her voice. Difficulty speaking and loss of voice are common symptoms among people with Parkinson’s disease.

‘I just keep thinking I would probably have even less volume by now if I hadn’t taken this singing class,’ Manatt said.

The group even held its first concert at The First Baptist Church of Ames last year.