Home » Health News » Should we all be re-learning how to breathe? 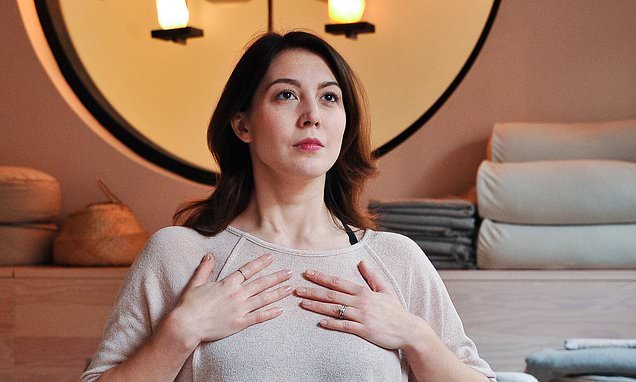 Should we all be re-learning how to breathe? With a host of classes and books claiming it’s the key to better health…

The room I’m lying in couldn’t be more calm. The walls are painted ballet-slipper pink and glossy-leafed plants trail from every nook and sill.  So far, so yummy-mummy yoga studio. Except I’m not here to stretch — I’m here to take a breathing class.

Yes — stop laughing at the back — I am literally being told how to breathe for 30 minutes.

You might think you already know how to breathe (you’re still alive, after all), but ‘breathwork’, as it is known, is becoming increasingly popular with the wellness set, touted as a shortcut to lower stress levels, improved focus, and better sleep. 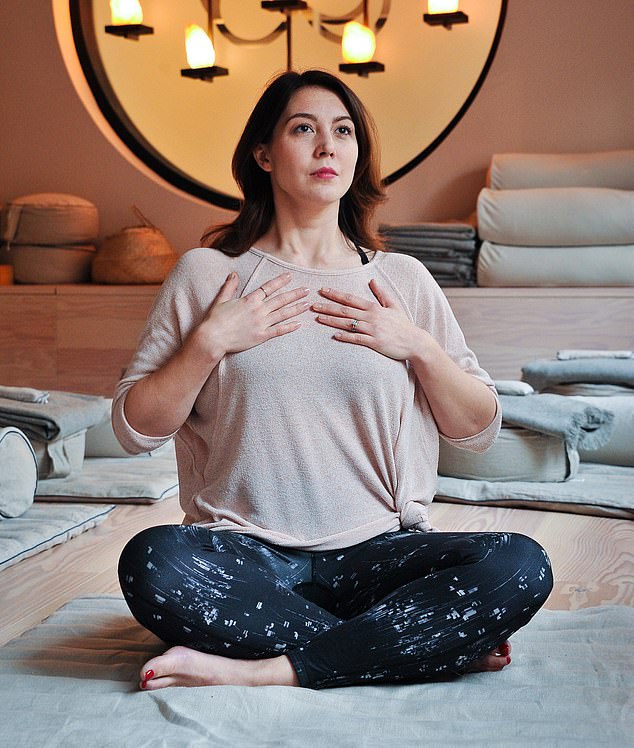 Taken up with enthusiasm by Silicon Valley types, athletes, and celebrities (Christy Turlington and Gwyneth Paltrow are fans reportedly), breathwork essentially means changing the way you breathe in order to change how you feel — whether that’s to help you unwind or to boost energy.

There are many variations, from simple relaxation exercises to techniques designed to have an apparently hallucinogenic effect — also known as holotropic breathing.

There is also breathing re-training, which is about learning to breathe more effectively on a daily basis. A new book, Breathe: The 4-Week Plan To Manage Stress, Anxiety and Panic Naturally, by Mary Birch, a former nurse, describes the affliction of chronic ‘over-breathing’ — doing it too fast, too deeply or both.

As well as contributing to panic and anxiety, it could be, Birch suggests, a reason for problems as diverse as migraines, sleep problems and bloating.

Richie Bostock, who teaches breathwork in London, agrees that many of us breathe incorrectly. ‘I’d estimate that 90 to 95 per cent of people breathe in a way that isn’t anatomically optimal and that’s not congruent to health and happiness,’ he says.

‘The most common mistake is what we call vertical breathing, where people breathe high and shallow — their shoulders go up and their upper chest goes out a bit, but there’s very little movement in the belly and mid-section.

‘We need to learn to breathe from lower down, with everything moving out, not just up, so expanding on the inhale and relaxing on the exhale — toddlers breathe this way instinctively. But as adults, tight belts, tight schedules and tight minds are literally taking people’s breath away.’ 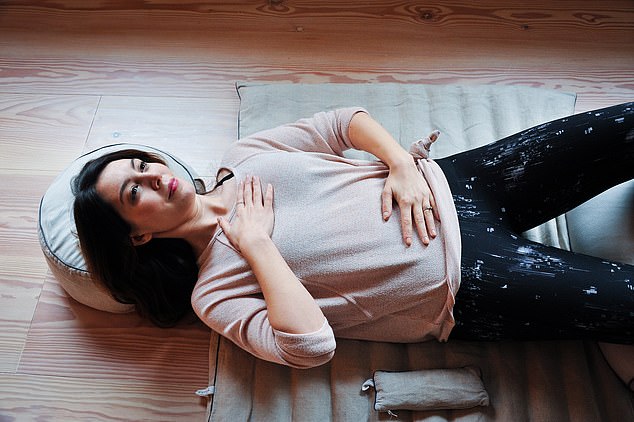 Did you know? There are many variations, from simple relaxation exercises to techniques designed to have an apparently hallucinogenic effect — also known as holotropic breathing

The class I’m here for today, led by Richie at Re:Mind studio in London’s Victoria, is focusing on meditative breathwork, to calm and re-charge.

We’re given a squashy mat to lie on with a blanket and encouraged to ‘get comfy’.

While not exactly taxing, it’s surprisingly absorbing and the class whizzes by. But is it actually doing anything for my health?

When we breathe, our lungs take oxygen into our blood (which the cells in our body need to function, affecting everything from digestion to thinking) and carbon dioxide comes back out as a waste product. The brain monitors the levels of these two gases all the time, adjusting as necessary.

Physiologists have also known for about a century that our heart’s rhythm synchronises to our breathing.

‘This is known as respiratory sinus arrhythmia,’ explains Dr Gavin Sandercock, a sports and exercise scientist at the University of Essex, who has studied the effects of breathing exercises. ‘If you slow down your breath, or even just breathe rhythmically, your heart slows to match it. 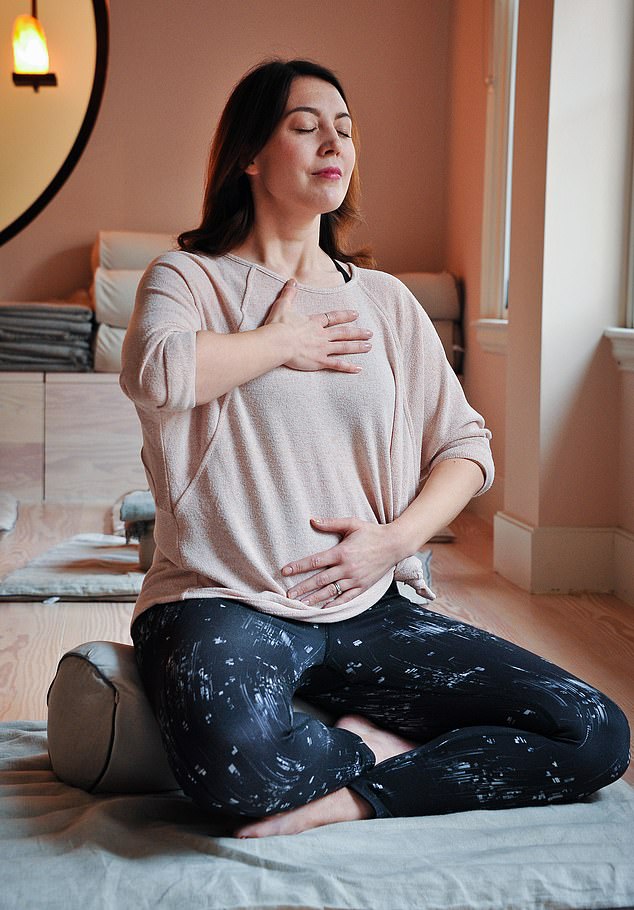 Science behind the treatment: Physiologists have also known for about a century that our heart’s rhythm synchronises to our breathing

‘When you breathe normally, you breathe in for quite a long time and then out relatively quickly. If you think of the two nerves working on the heart as an accelerator and a brake, what this means is that in normal breathing your brake isn’t on very long.

‘Whereas, by breathing more rhythmically, you’re using your brake more and your accelerator a little less, slowing your overall heart rate.’

There is some evidence that breathing at this rate, sometimes described by researchers as ‘paced’ or ‘slow’ breathing, has health benefits.

For instance, a small 2015 study published in the journal Psychophysiology found it could help people with insomnia get to sleep more easily, and wake less during the night, if practised for 20 minutes before bedtime.

Meanwhile, an Australian review in 2017 concluded that practising slow breathing could ‘optimise’ physical markers ‘associated with health and longevity’. For instance, the review included several studies that have found it can lower blood pressure.

Last year, researchers at Trinity College Dublin found a possible neurological explanation for why yogic breathing — the slow, rhythmic breathing you do during yoga — has anecdotally been associated with improved focus.

Researchers found that activity in a small area in the brain that produces the stimulating chemical messenger noradrenaline — released when we’re excited or paying attention — increases when we inhale and decreases when we exhale.

‘It is possible that by focusing on and regulating your breathing, you can optimise your attention level,’ they said.

Proponents of breathwork sometimes say the ‘inefficient’ way most of us breathe day-to-day leads to a kind of low-grade ‘suffocation’ in the body, because not enough oxygen reaches our cells.

‘You hear this idea quite a lot — but it’s fundamentally wrong,’ responds Dr Sandercock. ‘There can be this idea that by doing deep breathing exercises you’re clearing the lungs of “stale” air. But it’s not true. As long as you maintain 98 or 99 per cent oxygen saturation levels in the blood, you’re breathing correctly. And the body is exceptionally good at doing this by itself.

‘Unless you are very ill, have a condition such as emphysema or are more than 2,500m above sea level, your oxygen saturation level will stay around that point.’

And it’s very difficult to improve on this healthy level, he says. ‘No matter what you do — even if you give athletes pure oxygen to breathe — it doesn’t change.’

If you are breathing ‘inefficiently’ for a short period, he says the body already has a mechanism for coping with this. ‘You’ll yawn to get more air in — that’s what the yawn reflex is.’

However, it is possible to over-breathe, he adds.

‘If you breathe faster or deeper than usual, or both, you breathe off too much carbon dioxide, but you’re not taking in any more oxygen as you’re already saturated, and this makes you feel dizzy, or sick, and eventually would make you pass out,’ he says.

I can’t deny that I left my breathwork class feeling blissfully relaxed.

‘As a relaxation exercise, it works brilliantly,’ confirms Dr Sandercock. ‘That’s because, as well as lowering your heart rate, you’re also clearing your mind by concentrating on your breath. And 30 minutes of a breathing class probably will lower stress hormones such as cortisol and noradrenaline. But it wouldn’t necessarily be any better than 30 minutes spent simply lying down or reading a book.’

His suggestion? Forget the classes. If you want to relax, simply breathe in for a count of five and out for five — this will mean you’re breathing at approximately the optimum rate of six breaths per minute. And don’t worry about it the rest of the time.

Who knew breathing could be so simple?