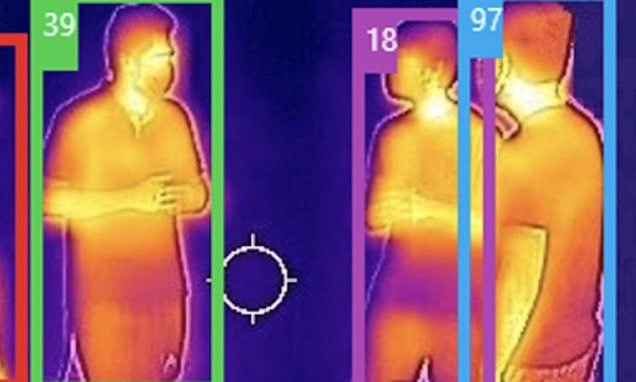 Scientists have developed a robot that can make sure groups of people are abiding by social distancing rules when they are indoors.

Researchers at the University of Maryland built a machine that uses CCTV cameras and thermal imaging to determine if people are staying six feet apart, and if someone in a group is potentially sick.

The cameras monitor crowds, and will be able to detect when two individuals have been near each other long enough to trigger a break in protocols, and potentially inform them.

The team hopes that this type of surveillance will help health officials with contact tracing and assist organizers of some indoor events with controlling crowds and ensuring compliance.

A Maryland team created a robot that uses CCTV cameras to detect when people are breaching Covid social distancing protocols. They hope the system will assist in contact tracing. Pictured: A thermal imaging scan from trials of the surveillance system Once a breach on social distancing is detected, officials are able to notify people, and let them know they are taking part in unsafe activities. One way to notify a group is using Frozone, a small, self-guided, robot that drives up to them and informs the group they are breaching guidelines be displaying a message on its screen. Pictured: A group of people breaking social distancing protocol (top), and Frozone reacting (bottom)

Researchers, who published their findings on Wednesday in PLOS One, believe that their invention could be used in any low- to medium-density indoor crowds.

The cameras detect when certain clusters of people have been standing within six feet of each other for an extended period of time.

These types of infractions of social distancing guidelines are called ‘breaches.’

When a breach is detected, a response from the system is triggered.

The response can be as simple as nearby TVs or other monitors displaying a public health notice reminding people to socially distance.

Researchers also built a more complex way to remind people to abide by the rules, though.

A small robot, called Frozone, equipped with cameras, a monitor can drive itself to the infracting group.

Frozone is self-guided, and once it finds the group breaking protocols, it will directly notify them and tell them to separate.

Researchers also found a way to cluster certain groups of people in an area together for contact tracing purposes.

The system can differentiate between interactions that would and would not be deemed ‘close contacts’ by existing Covid guidelines.

Two people who walk by each other, for example, will not be detected as a close contact because their interaction was minimal.

If two people walk with each other, though, and are near each other for a long period of time despite remaining moving, it will detect them as contacts.

People who stand near each other for an extended period of time – usually more than 15 minutes being the norm – will be clustered together as close contacts.

This kind of clustering can be valuable for public health officials.

If one person in the cluster tests positive for Covid, they can quickly notify others within the same cluster and inform them to test and quarantine.

They can even extend this out another level, and notify those at a secondary risk that they were in the same cluster as someone who was exposed to the virus in another cluster.

The system is not entirely perfect yet, though.

It cannot yet detect who is or is not in the same household, so two people who are allowed to stay within six feet of each other may get an unnecessary public health notice.

People also may be uncomfortable with the surveillance system, and an automated notification from the robot, so the team hopes in the future to create better human-to-robot interactions.