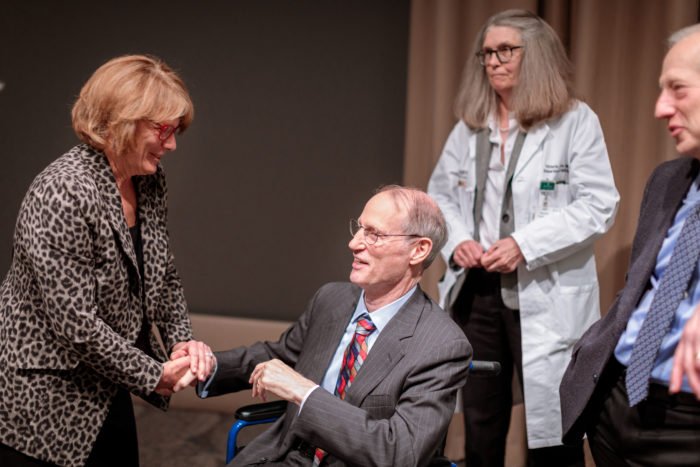 Sadler, the Ira M. Lang Professor of Medicine and director of the Division of Hematology at Washington University School of Medicine in St. Louis, was recognized for his many years of service and dedication to ASH and to the field of hematology.

He received the award at a recent symposium held in his honor on the Medical Campus. Numerous colleagues and former trainees were in attendance, some traveling from as far away as Europe and Japan.

Sadler is a highly regarded expert in the research and treatment of blood clotting disorders. Such disorders can cause heart attacks, strokes and uncontrolled bleeding, which together account for more deaths each year in the United States than all types of cancer combined.

“Throughout his career, Evan has made critical contributions to understanding how blood clots to stop bleeding and what goes wrong when essential factors in blood clotting are dysfunctional,” said Stuart Kornfeld, MD, the David C. and Betty Farrell Professor of Medicine. “Evan has worked this all out in such an elegant way. His work really stands out for its quality, depth and range, and he has had a major impact in the field of hematology and in improving the lives of patients.”

During his nearly 35-year career at the School of Medicine, Sadler conducted pioneering studies of several blood clotting factors. In particular, his contributions have been critical to understanding the molecular, genetic and biochemical underpinnings of two proteins – von Willebrand factor and ADAMTS13 – that are associated with bleeding and clotting disorders.

Sadler’s lab also identified the molecular basis for a range of subtypes of von Willebrand disease, a common inherited bleeding disorder that can cause excessive bleeding due to the inability of blood to clot. His complementary studies of ADAMTS13 have helped scientists understand the development of a rare clotting disorder called thrombotic thrombocytopenia purpura, in which blood clots form in small blood vessels in the body, limiting blood flow to the brain, heart, kidneys or other vital organs.

The molecular understanding of these diseases enabled Sadler to lead efforts to develop clinical guidelines for the diagnosis and treatment of von Willebrand disease and thrombotic thrombocytopenia purpura.

In addition to his work in the clinic and his lab, Sadler is well-known for helping trainees develop their potential to be scientists. He has trained nearly 100 graduate students and post-docs, many of whom have gone on to successful careers of their own in academia and industry, said David Ginsburg, MD, of the University of Michigan, who gave a tribute lecture in Sadler’s honor.

Ironically, Ginsburg is both a longtime colleague and competitor of Sadler’s. For several decades, they have conducted work along parallel tracts, each making critical – and sometimes overlapping – discoveries of blood clotting factors.

“Even though Evan was my major competitor, he also became a highly valued colleague and friend,” Ginsburg said. “I trusted him because of his incredible integrity. His integrity has rubbed off on all of us.”

“Evan played an extraordinary role as a mentor to so many trainees, and what’s remarkable is that so many of them came back to be with him as he was honored by the Washington University community and ASH,” he added.

Sadler has served in a number of leadership roles with ASH, including as president in 2011 and treasurer from 2003 to 2006. He also was recognized by the society in 2016 with the Henry M. Stratton Medical for Basic Science.