Home » Health News » Robbie Savage: Footballer on ‘difficult’ mental health – ‘you just have to put on a show’ 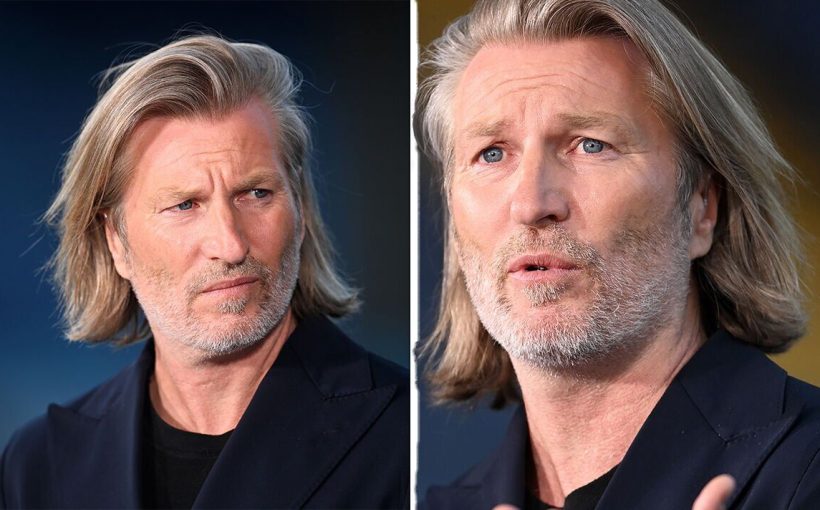 Lifting the lid on the anxiety that he has suffered both on and off the pitch, Savage is one of many sporting stars to share their experience in an attempt to destigmatise talking about mental health. First speaking out back in 2017, 47-year-old Savage revealed that he speaks to a doctor once or twice every month before revealing the huge difference between his on-screen persona in comparison to who he is at home. Since 2017, his work as an advocate for mental health saw the star question former Secretary of State Matt Hancock on the ban on playing football during the COVID-19 lockdown.

“How different am I to the man on television?” Savage began to reveal in an interview before going on to say: “Completely different. The people that know me will back that up.

“People will see me on TV and have a perception of me which is completely and utterly wrong, though I have my opinions and everything I say I believe.

“When I am on the TV and radio some people will look at me and think, ‘Look at him, full of life and enjoying life’. That’s also with how I look and people can come up with the wrong perception.

“When I go home I have the same worries and troubles as everyone else. For me, it’s difficult, as sometimes you just have to put on a show, but if I have a bad day at work I fear I could get sacked just like everybody.”

Explaining more about his anxieties surrounding his job, Savage went on to say that speaking to his doctor regularly provides him with the reassurance he needs to get him out of a “dark place”.

Recalling one incident in particular the star shared: “I might not think I am good enough for a role, or wonder whether people will know who I am because I didn’t have a good enough football career. I think people always like to put me down and that’s difficult to deal with.

“When I broke my leg [playing for Blackburn in 2007] I was in a dark place, a bad place. Similarly, since I retired you don’t know what’s around the corner. I admit there are times still now [when I struggle] – which is why I have a doctor I speak to for reassurance.”

But even with the help of his doctor, Doctor Tim, the star still found that his anxiety meant he turned down multiple reality-television offers due to a lack of self-confidence.

“As soon as the lights go out and the mic is off I go back into my shell. I go home, I worry. I am insecure, very insecure,” he added.

In addition to his struggles, Savage is well-aware of the devastating consequences that can happen when people do not speak about their mental health trouble after losing his close friend and former Wales manager Gary Speed back in 2011.

“Lots of current and ex-footballers, or just people in the workplace, suffer from these mental health issues but don’t speak,” said Savage.

“Gary was a close friend. He didn’t open up to anybody. If he had we could still be talking about Gary and how he is still here. I wish he had spoken up about his troubles to prevent what happened. I was with him three weeks before and there were no signs. He was the Gary Speed I played with. My captain, a fantastic leader. Doing great with Wales.”

According to statistics provided by Mind, a leading UK-based mental health charity, one in four people will experience a mental health problem of some kind each year in England. The most common diagnoses in any given week in the same location include:

As the term mental health refers to a wide range of mental health conditions that can affect an individual’s mood, thinking and behaviour it is hard to create a definitive list of symptoms.

However, the Mayo Clinic gives the following examples of signs and symptoms that could indicate that an individual’s mental health might not be how it should:

It is recommended that if you or someone you know notices any of these symptoms then they should seek professional advice as most mental illnesses do not improve on their own. In fact, if left untreated, a mental illness may get worse over time and cause serious problems.

Taking time to find an accurate diagnosis can help individuals to find an appropriate treatment, which in many cases involves a combination of therapy and medication.

Psychotherapy, also known as talking therapy involves talking about an individual’s condition and learning coping mechanisms to help deal with symptoms. One particular type of therapy, known as cognitive behavioural therapy (CBT)is commonly used to treat anxiety and depression. It is based on the concept that your thoughts, feelings, physical sensations and actions are interconnected, and that negative thoughts and feelings can trap you in a vicious cycle.

In addition to therapy, medication is used to improve symptoms and help making talking therapy more effective. Some of the most commonly used classes of prescription psychiatric medications include:

For confidential mental health support, you can contact Samaritans 24 hours a day, 365 days a year. You can call 116 123 (free from any phone) or email [email protected]