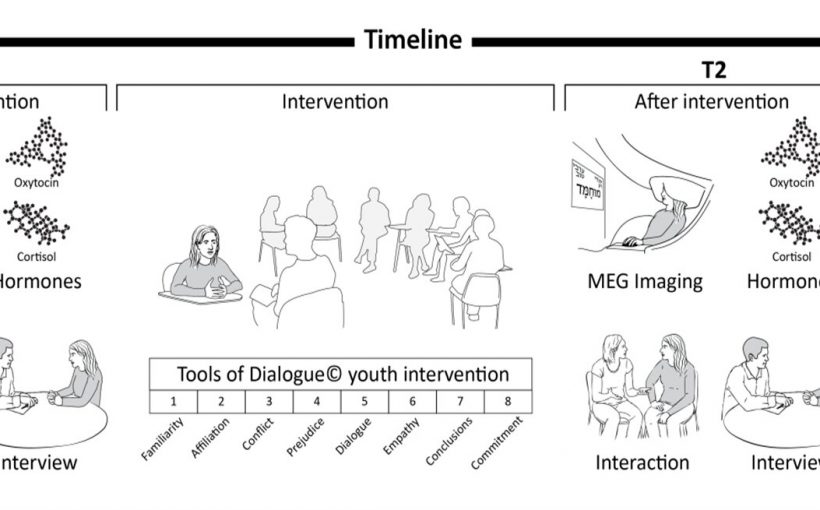 Herzliya-2023, Prof. Ruth Feldman, director of the Center for Developmental Social Neuroscience at Reichman University’s Baruch Ivcher School of Psychology, together with her research partners, examined whether it is possible to build an intervention for teenagers from polarized groups in a society that has experienced multigenerational conflict, based on findings from the field of neuroscience. Can such interventions improve the brain’s reactions towards others, and can these improvements be preserved over time?

With the global escalation in conflicts between population groups, acts of violence among citizens within cities, and the increasing participation of youth in civil conflicts, there appears to be an urgent need to develop science-based methods to mitigate hatred and aggression and foster empathy and dialogue between youth growing up in the reality of a long-term conflict.

The method developed by Prof. Feldman and her colleagues is based on new perspectives from neuroscience—particularly from social neuroscience—and the long-term research conducted in her lab on the “biology of love” (and hatred). For the study, the researchers built a unique synchrony-focused intervention and examined its effects on the neural and hormonal responses and communication behavior among Jewish and Arab adolescents. The intervention, entitled “Tools of Dialogue” is a manualized group intervention of eight meetings between Jewish and Arab teenagers.

Each meeting lasted about two and a half hours, and was held in groups of twelve boys or girls, six of whom were Jews and six of whom were Arabs. The sessions were led by two mediators, one Jewish and one Arab, both with vast experience in facilitating Jewish-Arab groups. Each meeting began and ended with a synchronous group ritual (familiar songs, movement, expression exercises, etc.) which released tensions and caused the group to unite, biologically and behaviorally, into one bio-behavioral unit.

Following this, the topic of the meeting was introduced and the group was divided into pairs or groups of four, comprising Jews and Arabs who had worked on specific assignments on the topic to be presented to the group.

During the intervention, the researchers focused on behavior and the acquisition of behavioral tools for conducting dialogue, with the aim of teaching the youths how to foster a respectful dialogue with others (even if they do not agree with their views), to develop empathy to the other side, and understand the behavioral and mental obstacles to dialogue (such as prejudice).

There was a conscious decision to avoid any discussion about the essence of the Jewish-Arab conflict, or about “who is right” or “who is the victim.” If these topics came up, the focus was on the behavioral techniques of holding a discussion and how to keep two perspectives in mind, even when you believe in your own wholeheartedly.

Prof. Ruth Feldman, Center for Developmental Social Neuroscience, Baruch Ivcher School of Psychology, Reichman University, says, “Our research findings showed that youth who received the intervention showed a broad and multidimensional bio-neurobehavioral change and the intervention gains lasted for years. This study is the first of its kind to show that an intervention based on increasing behavioral synchrony in groups engaged in intractable conflict stimulates the brain’s empathic response, attenuates the neural basis of prejudice, reduces the cortisol response (stress), increases oxytocin (love) and shapes interpersonal interaction that is more mutual and less hostile.”

“This change is evident in the participants even after seven years, and the youth who underwent the intervention developed more tolerant attitudes towards the other, believed in finding a solution, and were actively involved in initiatives for dialogue and peace as young adults.”

The work is published in the journal PNAS Nexus.