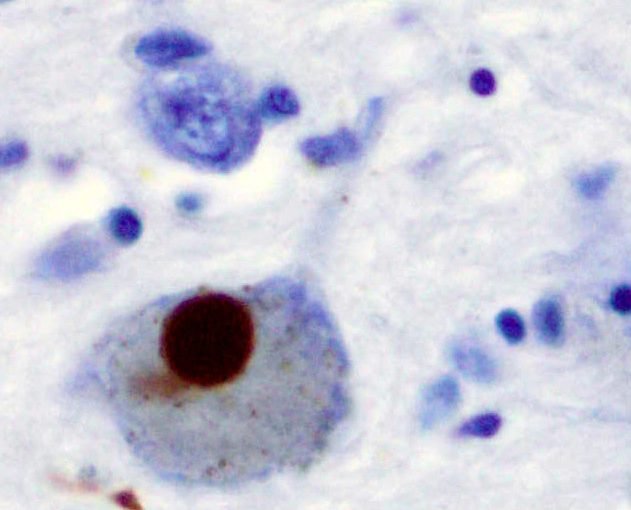 A defining feature of Parkinson’s disease is the clumps of alpha-synuclein protein that accumulate in the brain’s motor control area, destroying dopamine-producing neurons. Natural processes can’t clear these clusters, known as Lewy bodies, and no one has demonstrated how to stop the build up as well as breakdown of the clumps—until perhaps now.

A team of neurologists at Georgetown University Medical Center (GUMC) has found through studies in mice and human brains, that one reason Lewy bodies develop is that a molecule, USP13, has removed all the “tags” placed on alpha-synuclein that mark the protein for destruction. Toxic heaps of alpha-synuclein accumulate, and are never taken away.

The findings, published in Human Molecular Genetics, show that inhibiting USP13 in mouse models of Parkinson’s disease both eliminated Lewy bodies and stopped them from building up again. The “tag” that USP13 removes is called ubiquitin, which labels alpha-synuclein for degradation.

“This study provides novel evidence that USP13 affects development and clearance of Lewy body protein clumps, suggesting that targeting USP13 may be a therapeutic target in Parkinson’s disease and other similar forms of neurodegeneration,” says the study’s lead investigator, Xiaoguang Liu, MD, Ph.D., an assistant professor of neurology.

There are three forms of motor disorders associated with build-up of alpha-synuclein. These “synucleinopathies” include Parkinson’s, dementia with Lewy bodies, and multiple system atrophy.

The study began with postmortem autopsies of individuals who donated their brains to research including 11 with Parkinson’s disease and a control group of 9 without Parkinson’s. The autopsies, which occurred 4 to 12 hours after death, found that the level of USP13 was significantly increased in the midbrain in Parkinson’s disease patients, compared to the control participants.

“Overexpression of USP13 in post-mortem brains with Parkinson’s disease was never discovered before this work. Its presence indicates that this molecule might reduce parkin’s ability to tag proteins with ubiquitin or may strip ubiquitin away from certain molecules like alpha-synuclein, resulting in accumulation of toxic clumps in the brain,” said Charbel Moussa, MBBS, Ph.D., the study senior investigator and director of GUMC Translational Neurotherapeutics Program.

Studies in mouse models of Parkinson’s disease then demonstrated that knocking out the USP13 gene increased alpha-synuclein ubiquitination and destruction. Researchers also saw that USP13 knockdown protected the mice against alpha-synuclein-induced dopamine neuron death. The mice had improved motor performance; parkin protein was increased and alpha-synuclein was cleared.

Investigators also found that a newer therapy being studied in those with Parkinson’s disease, nilotinib, worked better when USP13 was inhibited. Nilotinib is FDA approved for use in specific blood cancers.

“Our discovery clearly indicates that inhibition of USP13 is a strategic step to activate parkin and counteract alpha-synuclein de-ubiquitination, to increase toxic protein clearance” added Moussa. “Our next step is to develop a small molecule inhibitor of USP13 to be used in combination with nilotinib in order to maximize protein clearance in Parkinson’s and other neurodegenerative diseases.”

“To our knowledge, these data are the first to elucidate the role of USP13 in neurodegeneration,” Liu says, suggesting that other neurodegeneration disorders that features protein clumps, such as Alzheimer’s disease, may have a similar pathology.