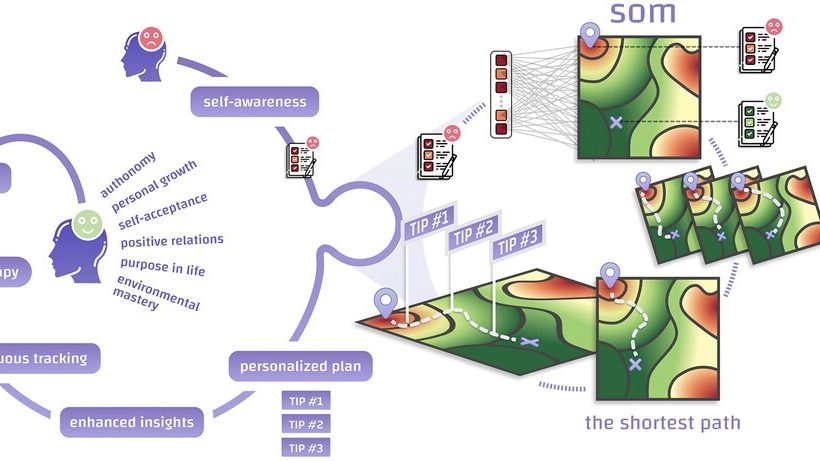 As described in a study published in the journal Aging, the scientists developed a model based on a branch of artificial intelligence called deep learning. The model relied on input from a psychological questionnaire that was used to estimate individuals’ psychological age (which reflects how old one feels, acts, and behaves), future well-being, and risk of depression. For each person, the team generated what’s called a self-organizing map that carried out an initial assessment of the individual’s level of well-being and propensity for depression, and then recommended personalized daily tips. The map consists of regions associated with high and low well-being—which may be considered “mountains” and “pits”—and reveals the shortest path between a person’s starting point and the point that maximizes their well-being.

An individual’s self-organizing map can be used to help direct cognitive behavioral therapy and other mental health interventions to provide a personalized path towards improved well-being that can be followed and tracked during therapy sessions. Or it can be used as a standalone self-help consumer app.

For the research, Nancy Etcoff, Ph.D., director of MGH’s Program in Aesthetics and Well-being teamed up with longevity experts at Deep Longevity Limited, including Fedor Galkin, Alex Zhavarankov, Ph.D., Kirill Kochetov, and Michelle Keller. “The deep learning model demonstrates that one’s baseline well-being is not the determining factor of future well-being, as posited by what’s known as the hedonic treadmill theory—which posits that people are doomed to quickly return to a relatively stable level of happiness despite major positive or negative events or life changes,” says co-author Nancy Etcoff, Ph.D., “In this work, we highlight aging-related trends in well-being and have brought forward a dynamic model of human psychology that allows maximizing one’s future level of happiness.”