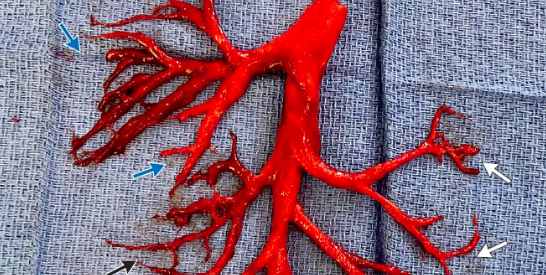 A 36-year-old man was admitted to the ICU with an acute exacerbation of chronic #heartfailure. After a ventricular assist device was placed & anticoagulation therapy initiated, hemoptysis developed, and he expectorated a cast of the right bronchial tree. https://t.co/QfqeqwWzXt pic.twitter.com/nXW201rjCT

Upon first glance it might resemble a gorgeous piece of coral, some sort of root system, or a brightly hued branch. However, you might be shocked to learn that this bright red object was actually coughed up by a human man — and is a six-inch wide blood clot molded into the right bronchial tree of his lung.

On Tuesday, The New England Journal of Medicine tweeted the image as part of their series on medical anomalies. In an accompanying article, University of California at San Francisco doctors Gavitt A. Woodard and Georg M. Wieselthaler explain that a 36-year-old man, who had been struggling with heart failure for quite some time, was admitted to the ICU suffering from an exacerbation of chronic heart failure.

The man’s medical history was complicated and included “heart failure with an ejection fraction of 20%, bioprosthetic aortic-valve replacement for bicuspid aortic stenosis, endovascular stenting of an aortic aneurysm, and placement of a permanent pacemaker for complete heart block,” they wrote. To manage his acute heart failure, doctors placed an Impella ventricular device — a pump that encourages blood flow through the body — and administered continuous heparin infusion for systemic anticoagulation. However, the procedure came with a set of risks.

“You have high turbulence inside the pumps, and that can cause clots to form inside,” Dr. Wieselthaler explained to The Atlantic. “So with all these patients, you have to give them anticoagulants to make the blood thinner and prevent clots from forming.”

During his first week of hospitalization the man was coughing up blood and mucus, and during one of those fits out came the cast of his right bronchial tree. How did this happen? Wieselthaler explains that blood likely broke out his pulmonary network and into his right lung and bronchial tree. “We were astonished,” Wieselthaler continued to explain. “It’s a curiosity you can’t imagine—I mean, this is very, very, very rare.”

While his patient felt much better after coughing up a (cast of) his lung, it did little to help the severity of his situation. Doctors continued treating him, but a little over a week later he died from heart complications of heart failure.

Woodard and Wieselthaler felt urged to share the photo, because it is so captivating. “Recognizing the beautiful anatomy of the human body is the main point of it,” Woodard explained.

Over on Twitter, reactions include a mix of horror and fascination:

Saw these trees at halftime and thought of that giant blood clot. That story has ruined me. pic.twitter.com/hz7yAxfOwl

Don’t understand why you’re all so horrified by that blood clot. It looks like the kind of coral people decorate their vacation houses with… pic.twitter.com/aK0SD5md51