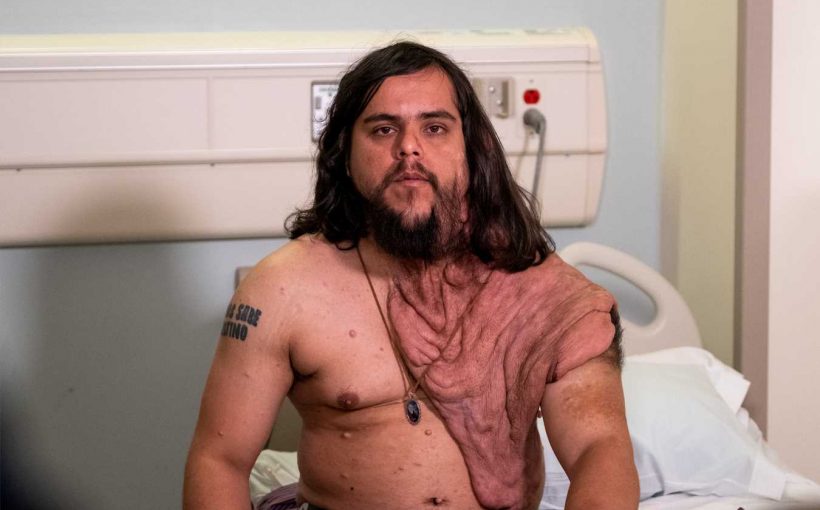 Enrique Galván, a 27-year-old Paraguay native who has endured bullying his whole life for the massive tumors on his body, has undergone a life-saving surgery.

Galvan suffers from neurofibromatosis, a rare skin disease that causes large tumors to grow on nerve tissues, which has plagued him almost his entire life.

After hearing from a friend about a humanitarian medical aid group working in his area, he booked a consultation and was introduced to Dr. Cris Barrios, a trauma surgeon at UCI Health, who performed the surgery, according to Fox News.

“I was living with fear and with a complex and was just full of fear,” Galvan told the outlet, through a translator, of enduring neurofibromatosis. “It was very difficult.”

According to the Mayo Clinic, neurofibromatosis can develop anywhere in your nervous system, including your brain, spinal cord and nerves, and typically is diagnosed in childhood or early adulthood.

The tumors are usually noncancerous (benign), but sometimes can become cancerous (malignant). Symptoms are often mild, but complications of neurofibromatosis can include hearing loss, learning impairment, heart and cardiovascular problems, loss of vision and severe pain.

Galvan flew to California last week for the surgery. His was only the second case of neurofibromatosis that Barrios had ever operated on, but he and his team were successful.

“We ended up removing about six pounds worth of extra tissue, which was really his primary complaint, just the weight and the inability to do things,” Barrios told ABC 7.

Galvan is currently recovering at a friend’s home in California, according to Fox News, and is looking forward to returning to his home in Paraguay.

: Parents of 10-Year-Old with Rare Condition Made Her Final Weeks Count: We Said ‘Let’s Have Fun

“I feel like a brand new person, I have more strength to keep going,” Galvan told ABC 7.

Barrios will travel there in July to check up on Galvan and make sure he is still healthy and tumor-free.

Galvan said that his faith got him through his medical problems.

“When I got closer to God, He is the one that helped me get over all this and to heal,” he told Fox News. “I want to continue what I was doing in helping other people, and to make sure that other people are also going to get closer to God with me.”