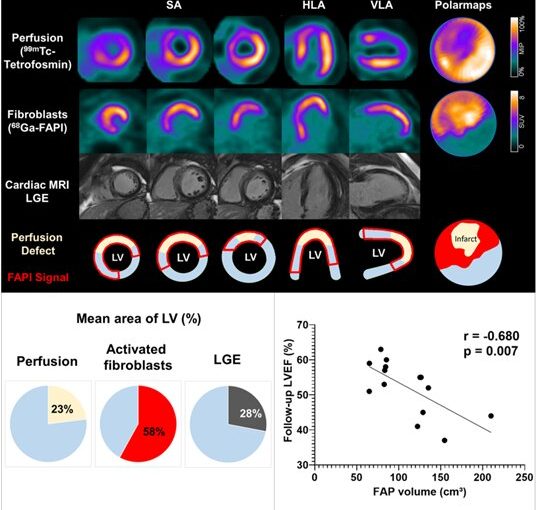 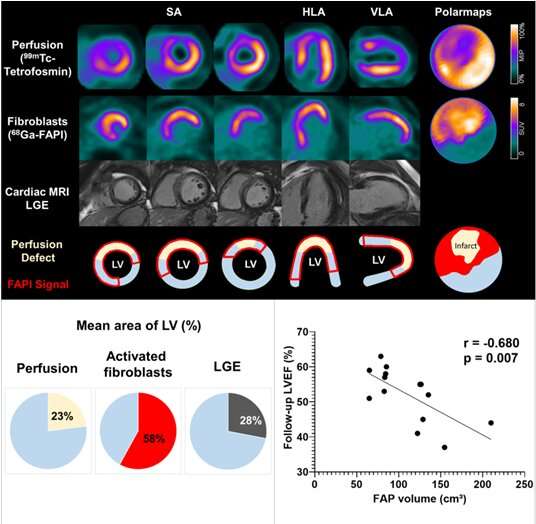 Poor functional outcomes after a heart attack can be predicted with a new PET imaging agent, 68Ga-FAPI-46. According to research presented at the Society of Nuclear Medicine and Molecular Imaging 2022 Annual Meeting, when correlated with cardiac MRI, 68Ga-FAPI-46 PET is new specific indicator of active fibrosis and can identify a patient’s chances of recovery. The detailed depiction of 68Ga-FAPI-46 PET signal after acute anterior myocardial infarction has been selected as SNMMI’s 2022 Image of the Year.

Each year, SNMMI chooses an image that best exemplifies the most promising advances in the field of nuclear medicine and molecular imaging. The state-of-the-art technologies captured in these images demonstrate the capacity to improve patient care by detecting disease, aiding diagnosis, improving clinical confidence, and providing a means of selecting appropriate treatments. This year, the SNMMI Henry N. Wagner, Jr., Image of the Year was chosen from more than 1,000 abstracts submitted to the meeting and voted on by reviewers and the society leadership.

Acute myocardial infarction, commonly known as heart attack, is one of the leading causes of death worldwide. After a heart attack, the heart goes through a series of changes at the molecular and cellular level. The fibroblast activation protein (FAP) is overexpressed as these changes occur and can provide useful information about a patient’s prognosis.

“Molecular PET imaging of the fibroblast activation protein has recently been evaluated in patients after acute myocardial infarction,” stated Johanna Diekmann, MD, clinician scientist in the Department of Nuclear Medicine at the Hannover School of Medicine in Hannover, Germany. “In our study, we sought to obtain further insights by correlating FAP-targeted PET imaging with tissue characteristics from cardiac MRI, as well as functional outcome.”

In all patients the FAP-upregulation was significantly larger than both the infarct size and the area of injury as defined by SPECT and cardiac MRI, respectively. A higher extent of myocardial FAP upregulation was predictive of subsequent left ventricular dysfunction. As such, the authors concluded, fibroblast activation in non-infarcted areas of the heart may contribute to adverse outcomes.

“Myocardial infarction is an important contributor to the development of heart failure, but the early molecular processes involved in the transition from initial injury to heart failure are under-treated,” said Diekmann. “New antifibrotic therapies (such as CAR-T cell therapies) could significantly change future therapy of heart failure. Using FAPI-PET to select patients suitable for therapy would open a new major application for PET in fibrosis and cardiac diseases.”