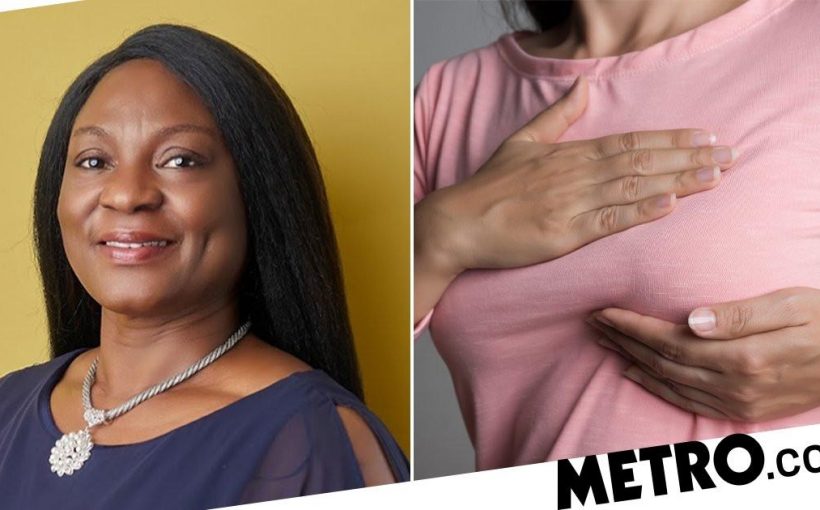 A mum who spent eight years battling breast cancer is calling for the screening age to be lowered to save more lives.

Ewa Adeliyi said she thought cancer was ‘something you hear about on the television’ and was ‘shocked’ when she was diagnosed age 44.

‘I never thought it would happen to me,’ said the mum-of-three, who lives in Milton Keynes.

Ewa went under the knife twice to remove a lump – only to be told cancerous cells remained.

She underwent numerous cycles of chemotherapy, which had a huge impact on her quality of life, before doctors recommended radiotherapy and hormone treatment.

But many reach the same age before they are offered their first routine mammogram, currently available to women aged 50-71.

Now Ewa is backing a campaign by oncologist Dr Grace Macaulay to expand the screening age from 45 to 75 to save lives.

A petition set up by Dr Macaulay on Change.org has hit more than 120,000 signatures in just two weeks.

Speaking exclusively to Metro.co.uk, Ewa, a former specialist advisor for Citizens Advice Bureau, told how she was lucky to catch the cancer early after spotting a lump and getting it checked.

Recalling her ordeal, she explained: ‘It was a very challenging time. I was out of work, I took voluntary redundancy concentrate on my health.

‘Three months after treatment, I struggled.

‘My understanding is, “I’m ok, I’m fine” but you are no longer the same.

‘That’s when the trauma started for me.

‘Yes, I received the all clear, no more cancer cells.

‘But I was still going through that trauma.

‘The doctor said “you have gone through a blast – you have got to allow yourself to begin to heal”.’

Ewa, who is based in Milton Keynes, is now a motivational speaker determined to help people ‘rise from the ashes’.

But she believes many more lives would be saved if the NHS offered screening to all women.

‘I am absolutely in support of the petition,’ Ewa told Metro.co.uk.

‘Yes, of course there has to be an age range in terms of finances for the NHS – but ideally it should be from the age of 16 to 18 – they are women already.’

Screening reduces the number of breast cancer deaths in the UK by around 1,300 a year, Dr Macaulay said.

‘The earlier you detect cancer, the higher the success rate,’ she told Metro.co.uk.

‘Because the invitation for a mammogram is sent out from 50, by the time the test is done the patient could be already be 52 or 53.

‘More than 120,000 signatures in two weeks shows people are crying out for this.

‘The petition is in memory of all my patients, those who have passed on and those who are still in the race for life which I am praying will continue to enjoy good health.’

Dr Macaulay now lives in Cambridge and works for the pharmaceutical industry.

She is urging people to go to their GP if they have any concerns.

‘If you have a family history or you think you are at a higher risk, ask your GP for a mammogram.

‘Health is wealth, we can make a change and help people live longer.

‘Many more lives would be saved if screening is started at 45.

This comes as a study by medical journal The Lancet recently revealed how annual screening beginning aged 40 was linked to a reduction in breast cancer deaths.

Girls Aloud star Sarah Harding, 38, last month revealed how she was battling breast cancer which she said had spread to other parts of her body.

Metro.co.uk has contacted the Department of Health for comment.

For more stories like this, check our news page.