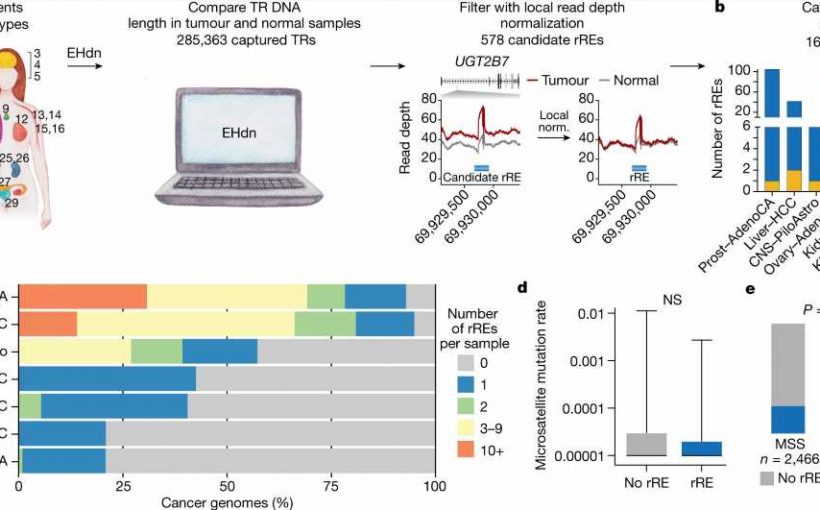 A team of researchers with member affiliations across the U.S. and Canada has found evidence of multiple recurrent, repeat expansions in human cancer genomes. In their paper published in the journal Nature, the group describes searching for repeat expansions in human tumors in databanks maintained by the International Cancer Genome Consortium and The Cancer Genome Atlas group.

As the researchers note, tandem repeat (TR) in DNA sequences is known to be involved in more than 50 inheritable diseases. And as they also note, most research looking into the impact of a given TR is restricted to neurodegenerative or neurological diseases not involving cancer.

Still, some prior research has shown that some mutations are known to occur in short-tract TR sequences, which has been attributed to microsatellite instability. In this new effort, the researchers took a closer look at associations between TR sequences in cancerous tumors.

The work began by searching the International Cancer Genome Consortium and The Cancer Genome Atlas datasets, looking for somatic repeat expansions in tumor DNA for over two-dozen types of cancers. The researchers found 160 recurrent repeat expansions (rREs). They noted that all but five of those found were likely cancer subtype specifics that often appear in multiple types of common cancers, such as ovarian, kidney and lung cancers.

The researchers also conducted whole-genome long and short sequencing on two types of cancer cell lines that they had found in their original search—they studied both using Expansion Hunter Denovo (EHdn) to measure TR length. This showed that approximately 72% of the repeat expansions in the tumor tissue were in long read sequences.

The researchers also noted that prior research with a molecule known as Syn-TEF1 has been found to reduce TR in certain neurological diseases, prompting them to test its use in several cancer types. This led to reductions in cell proliferation. They suggest this finding indicates that other molecules or therapies originally intended to treat neurological diseases with TR associations may help treat some cancers as well.