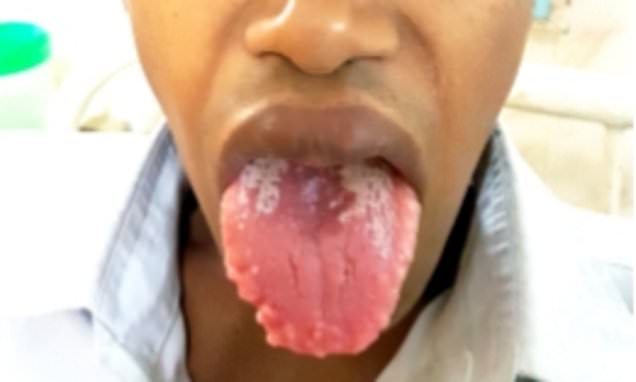 Man, 36, develops swollen ‘megacolon’ after rare growths spread across his tongue and insides leaving him constipated for THREE MONTHS

A man had to have his entire bowel removed after he endured chronic constipation for three months.

The unnamed 36-year-old, ‘from a rural area in Sri Lanka’, suffers from the rare condition multiple endocrine neoplasia type 2B (MEN2B). This can cause tumour-like growths in the gut lining that affect bowel movements.

He arrived at the National Hospital of Sri Lanka, Colombo, complaining of severe discomfort – and admitted passing less than three stools a week and ‘straining 25 per cent of the time’.

After listening to his colon via a stethoscope, doctors discovered the man had ‘sluggish bowel movements’ with an X-ray confirming a ‘megacolon’.

Due to MEN2B ‘responding poorly to medical management’, the doctors decided the best option was to remove the man’s colon. He made a full recovery and has been fitted with a stoma bag. 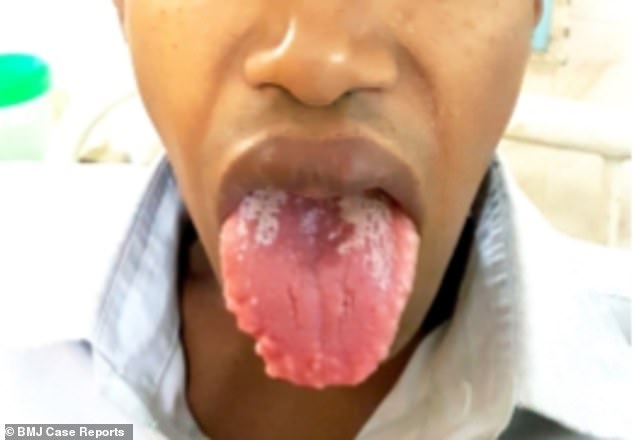 The unnamed man suffers from multiple endocrine neoplasia type 2B. As well as altering bowel movements, this can also cause painful growths on the eyelids, tongue (pictured) and lips

MEN2B’s prevalence is unclear but studies suggest it affects between one in every 600,000 to four million people.

The man arrived at hospital ‘ill looking’ and uncomfortable with distension – the medical term for a ‘ballooning effect’, Dr Ashan Rabinath Fernando – a surgeon at the National Hospital of Sri Lanka – wrote in BMJ Case Reports.

Despite him suffering from constipation for a long time, ‘socieconomic constraints’ prevented the patient from seeking treatment sooner.

Examinations revealed he had painful benign growths on his eyelids, tongue and lips – a common symptom of MEN2B.

He also had abnormally long fingers, with ‘marfanoid body habitus’ – a tall slender physique with long arms, hands, fingers, legs, feet and toes – also being associated with the rare condition.

Although he did not have a fever, the man was suffering from swollen lower legs, ankles and feet.

WHAT IS MULTIPLE ENDOCRINE NEOPLASIA TYPE 2B?

Multiple endocrine neoplasia type 2B (MEN2B) is a genetic condition that causes glands to become overactive and produce tumours.

Its prevalence is unclear but studies suggest it affects between one in every 600,000 to four million people.

Tumours often form on the thyroid or adrenal glands and become cancerous in nearly all cases.

Growths can also occur in the gastrointestinal tract, leading to diarrhoea or constipation.

Other symptoms include bumps on the lips, eyelids and tongue.

MEN2B sufferers often have long arms, legs and fingers, and may have very loose joints.

Patients are recommended to have their thyroid removed as soon as they are diagnosed to prevent them developing cancer.

They then need to take medication that contains the hormones normally produced by the thyroid.

An X-ray of the patient’s abdomen revealed a ‘grossly dilated large bowel’ that measured 7cm across.

The colon is generally considered dilated if is more than 6cm in diameter.

His caecum – the pouch that acts a junction between the small and large intestine – was dilated to 12cm. It is normally less than 9cm.

The man arrived at hospital having already been diagnosed with MEN2B – defined as tumours in the thryoid and adrenal glands.

Most sufferers go on to develop thyroid cancer, with the patient being diagnosed at 18.

MEN2B also affects the gut lining, which causes constipation in 72 per cent of sufferers, past research suggests.

To treat his thyroid cancer, the man had the gland removed.

He was then prescribed thyroxine – the main hormone secreted by the thyroid – which plays a critical role in maintaining the body’s digestive function, heart rate and muscle control.

But doctors believe the man failed to take his thyroxine medication due to levels of the hormone in his blood being low.

This may have worsened his constipation, they claim.

The patient is an unusual case in that most MEN2B patients experience chronic constipation as babies and have their colons removed during childhood.

The authors therefore urge doctors not to rule out MEN2B if an adult presents with severely reduced bowel movements.