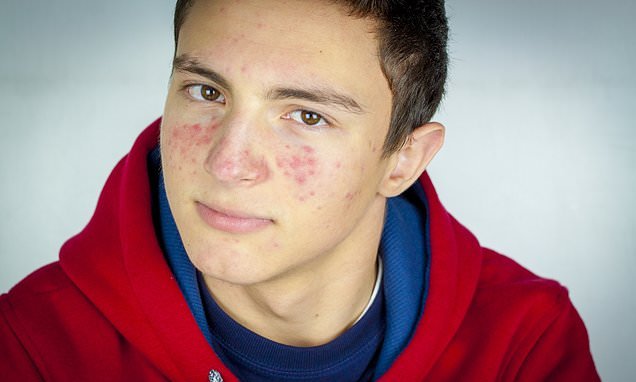 Hope has been given to millions of acne sufferers as a new study suggests the condition may be genetic.

In the first trial of its kind, researchers analysed the DNA of more than 26,700 people – including thousands battling severe acne.

Results showed there were significant genetic variations between people with the condition and those with clear skin.

Genes that control hair follicles are thought to play a particularly critical role in the onset of the common condition.

The researchers have called the study a ‘significant leap forward’ and hope it will lead to more effective treatments that prevent permanent scarring. 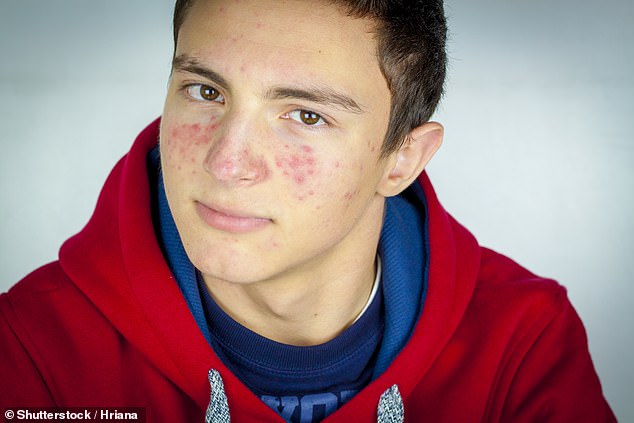 The study was carried out by the National Institute for Health Research Biomedical Research Centre at Guy’s and St Thomas’ NHS Foundation Trust in London.

Acne is a very common condition in teenagers and young adults, with around 80 per cent of those aged 11-to-30 in the UK being affected, according to NHS statistics.

Around 85 per cent of 12-to-24 years old in the US suffer to some extent, figures from the American Academy of Dermatology suggest.

People are most likely to suffer in their teens, with symptoms generally disappearing by the time they reach their mid-20s. However, it can strike in adulthood.

Consultant dermatologist Professor Jonathan Barker and colleagues analysed the DNA of 26,772 people, of which 5,602 had acne.

The researchers found variants related to acne at 15 genetic locations, of which 12 had not previously been identified.

They also discovered many of the genetic variants related to the skin condition affect the formation of hair follicles.

Impaired hair follicle function is thought to encourage the colonisation of acne-causing bacteria that lead to inflammation.

‘Applying these genetic approaches to acne has never been done before, and it’s a significant leap forward,’ Professor Barker said.

Professor Barker hopes understanding the role of genetics in acne will lead to more effective treatments that focus on reducing inflammation and suppressing bacterial colonisation.

‘When you have insight into the genetic basis of a condition, you can develop much more effective treatments,’ he said. ‘For people with acne, it’s so important to have more treatments available.

‘We need to treat people earlier and more effectively, so that they don’t get scars, which last even after the condition has come and gone.’ Scars affects up to 20 per cent of patients.

Writing in the journal Nature Communications, the authors added: ‘Acne can have severe emotional and psychological consequences and has been associated with depression, unemployment, suicidal ideation and suicide itself.

‘The treatment regimes are often ineffective and poorly tolerated, and there remains a substantial unmet medical need.’

The study was a collaboration between Professor Barker’s team and Professor Michael Simpson’s Genomic Medicine Group at King’s College London.

Professor Simpson added: ‘A number of the genetic variants point to interesting mechanisms that could be really good targets for new drugs or treatments that would really help patients.’

The researchers stress there are additional genetic variants related to acne that have not been discovered.

It is defined as spots and oily skin that can be red or painful. Although not fully understood, acne is thought to be caused by a combination of sebum, inflammation and the bacteria Propionibacterium acnes entering hair follicles.

Acne treatment varies depending on how severe the condition is. The NHS advises that if a person has just a few blackheads, whiteheads or spots, that they try over-the-counter creams containing benzoyl peroxide.

Benzoyl peroxide is an antiseptic that reduces the amount of bacteria on the skin, which should lower the number of black and whiteheads.

In more severe cases, topical retinoids may be prescribed, however, these can cause birth defects and should not be taken during pregnancy. Antibiotics may be given alongside creams and gels.

Hormonal therapies have been shown to be effective in women, particularly if their acne relates to their hormones. An example is the controversial drug isotretinoin, which reduces the production of sebum and prevents follicles clogging.

Isotretinoin damages unborn babies, and women are required to sign a form confirming they understand the risk and will use contraception, even if they are not sexually active.

There have also been reports of people experiencing extreme aggression or suicidal thoughts while taking isotretinoin. The NHS stresses, however, there is no evidence these mood changes are the result of the medication.

WHAT IS CYSTIC ACNE?

Cystic acne – the most severe form of the skin condition – occurs when oil and dead skin cells build up deep within hair follicles.

If these become infected, it can cause boil-like blemishes.

Spots occur when a pore in the skin gets clogged, usually with dead skin cells. If bacteria enters the pore, it can become red and swollen.

Cystic acne takes place when this infection goes deep into the skin, creating tender bumps that are full of pus.

If the cyst bursts, it can spread the infection, causing more break outs.

Sufferers are usually in their teens or early 20s, but can be as young as eight or as old as 50. Cystic acne is more common in men.

The face, chest, back, upper arms and should are most often affected.

Cystic acne’s exact cause is unclear but is thought to involve the hormones androgen.

Androgen increases during puberty and can result in pores getting clogged.

Over-the-counter medication that can ease milder acne often have no effect on cystic forms.

A dermatologist may prescribe oral antibiotics that control bacteria and lower inflammation.

Creams and gels containing retionoid, a form of vitamin A, can also help to unclog pores.

Birth-control pills may also help women to regulate their hormones.

It is important to seek treatment to prevent scarring.

Acne sufferers should not pick at their blemishes as this may push the infection deeper and make it spread.

Sufferers should also try and relax due to stress causing the body to release more hormones.