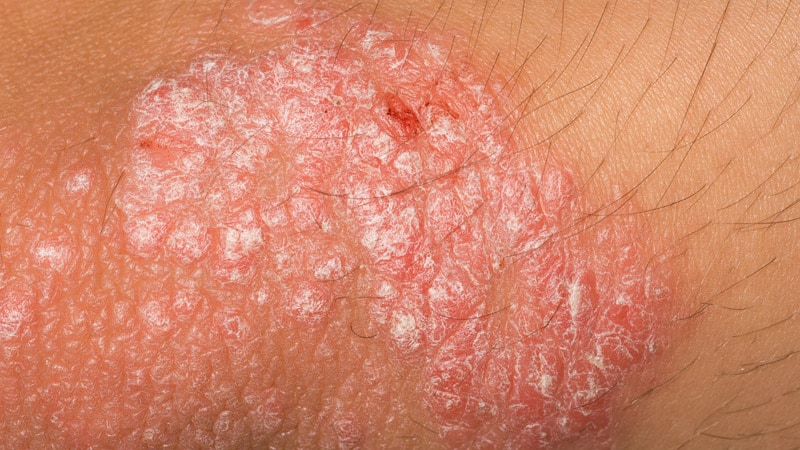 The US Food and Drug Administration (FDA) has approved roflumilast 0.3% cream for the topical treatment of plaque psoriasis, “including intertriginous areas,” in patients aged 12 years and older.

Roflumilast is a selective inhibitor of phosphodiesterase 4 (PDE4), the first approved for treating psoriasis, according to manufacturer Arcutis Biotherapeutics. Oral roflumilast ( Daliresp ) was approved in 2011 for treating chronic obstructive pulmonary disease (COPD). The manufacturer, Arcutis Biotherapeutics, announced the approval on July 29.

“It’s a breakthrough topical therapy,” says Mark G. Lebwohl, MD, dean of clinical therapeutics and professor of dermatology, Icahn School of Medicine at Mount Sinai, New York, and principal investigator in trials of topical roflumilast. In an interview, Lebwohl noted that the treatment significantly reduced psoriasis symptoms in both short- and long-term trials.

In addition, two features of this treatment set it apart from other topical psoriasis treatments, he said. Roflumilast is not a steroid, so does not have the risk for topical steroid-related side effects associated with chronic use, and, in clinical trials, topical roflumilast was effective in treating psoriasis in intertriginous areas, including the buttocks, underarms, and beneath the breasts, which are difficult to treat.

In addition, by week 2, some participants treated with roflumilast had experienced reduced itchiness in both studies. At 8 weeks, among those with a WI-NRS score of 4 or more at baseline, 67% and 69% of the treated patients had at least a 4-point reduction in the WI-NRS versus 26% and 33%, respectively, among those on vehicle (P < .0001 for both studies), according to the company.

“The study was unequivocal about the improvement in the intertriginous sites,” Lebwohl commented. He contrasts that to the data from other nonsteroidal topicals, which he says can be associated with a rash or irritation in sensitive areas.

Lebwohl noted that PDE4 is an enzyme that increases inflammation and decreases anti-inflammatory mediators and that inhibiting PDE4 may interrupt some of the inflammation response responsible for psoriasis symptoms, as it has for other conditions like atopic dermatitis. Data from the 8-week phase 3 trials and year-long phase 2b, open-label studies support that hypothesis.

“I’m always excited for new psoriasis treatments to broaden our treatment armamentarium,” said Lauren E. Ploch, MD, a dermatologist who practices in Augusta, Georgia, and Aiken, South Carolina, who was asked to comment on the approval.

Even a symptom that seems benign, like itching, Ploch added, can lead to reduced sleep and increased irritability. Referring to the data on the treatment in the sensitive, intertriginous areas, she noted that the skin in these areas is often thinner, so treatment with steroids can cause further thinning and damage to the skin. If roflumilast doesn’t cause burning, itching, or thinning, it will be a great option to treat these areas, she said in an interview. She was not involved in the trials.

Roflumilast cream will be marketed under the trade name Zoryve, and is expected to be available by mid-August, according to Arcutis.

Roflumilast cream is also under review in Canada for treatment of plaque psoriasis in adults and adolescents.