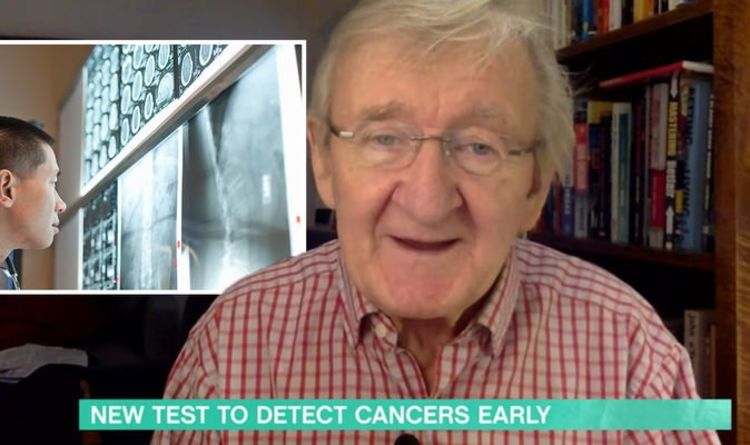 Lung cancer claims more lives than any other form of cancer in the UK, in part because it is usually not picked up until it has spread. However, low-dose computerised tomography (CT) scans can detect tumours in people’s lungs early and cut deaths by 16 percent, according to new findings from the UK Lung Cancer Screening Trial (UKLS). Speaking on ITV’s This Morning, Doctor Chris heralded the finding as a “major step forward”.

As Doctor Chris explained, the ability to detect early lung cancer is “dramatic”.

However, chest x-rays are not are not good at detecting tumours in lungs.

The development is significant because lung cancer is the “biggest cancer killer” in this country, he said.

The UKLS trial involved 3,968 people in Liverpool and Cambridge aged between 50 and 75. All had been identified as being at risk of developing lung cancer over the next five years.

Significantly, while there were 46 deaths over those seven years among those who had not had a CT scan, many fewer occurred – 30 – in the group that had been screened.

According to doctor Chris, the findings represent a “major step forward” in the fight against lung cancer.

Dr Robert Rintoul, the chair of the UK Lung Cancer Coalition’s clinical advisory group and a co-author of the study, said the findings underlined that “national lung cancer screening programmes are urgently needed.

“In the UK, only one-quarter of new cases of lung cancer are caught at an early stage when treatment with curative intent can be offered.

By contrast, around 75 percent of lung cancers identified through CT screening studies are early stage, and can be treated by surgical removal or radiotherapy.”

The study is the latest to show that CT screening spots lung tumours early. The results are being sent to the UK National Screening Committee, which advises ministers.

Professor Anne Mackie, Public Health England’s director of screening, said the findings would inform the committee’s ongoing discussions into whether to recommend screening of at-risk groups.

There are usually no signs or symptoms in the early stages of lung cancer.

However, many people with the condition eventually develop symptoms including:

“You should see a GP if you have these symptoms,” advises the NHS.