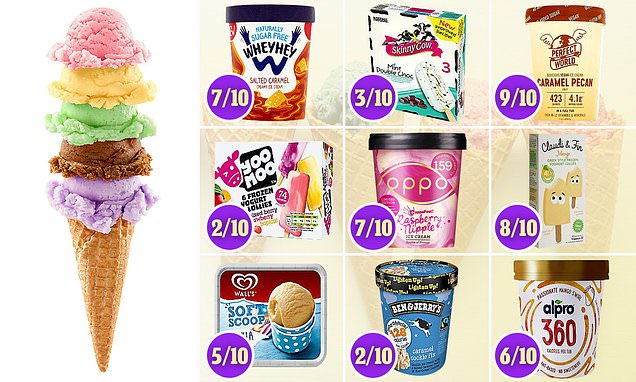 Take a trip down the supermarket freezer aisle, and you’ll find any number of ‘healthy’ ice creams – some with less sugar and fat than usual, others with ‘superfood’ ingredients or that boast of being plant-based and dairy-free. Here Helen Bond, a dietitian and spokesperson for the British Dietetic Association, assesses their claims – we then rated (and tasted) them. 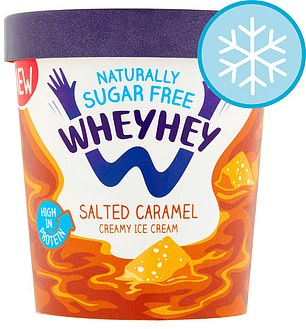 ‘HEALTHY’ BIT: Added dairy whey protein, which is satiating and high in bone-friendly calcium, and xylitol, a sweetener extracted from birch bark that has 40 per cent fewer calories than sugar and said to not cause tooth decay.

EXPERT VERDICT: A 100ml serving of this supplies around 10 per cent of your daily limit of saturated fat, which is low for ice cream – and this is low in calories too. The added whey means a serving has as much protein as an egg (twice the amount of a traditional equivalent such as Häagen-Dazs salted caramel), but you can get plenty of protein more healthily from other sources and I’m not sure you really will eat less of a high protein ice cream.

Xylitol is a good sugar alternative, but not everyone tolerates it well – as little as 20g has been shown to cause diarrhoea in those who are sensitive and there’s this amount in two-thirds of a tub, so stick to two scoops. 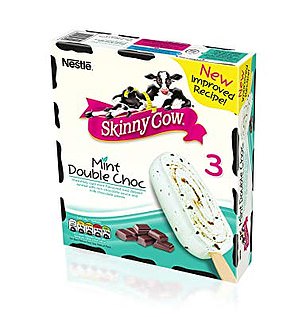 EXPERT VERDICT: They’re low fat but the chocolate sauce and chocolate chips swirled though these minty lollies mean they are still sugary – each contains more than three teaspoons of sugar, though some will be lactose from milk, which isn’t harmful to teeth. Thanks to the added chicory root, there’s almost as much fibre in one of these as in a slice of wholemeal bread, along with several emulsifiers, stabilisers and starches. These additives are perfectly safe but don’t add anything of nutritional value and inulin makes some people bloat. Best regarded as an occasional treat just like normal ice cream. 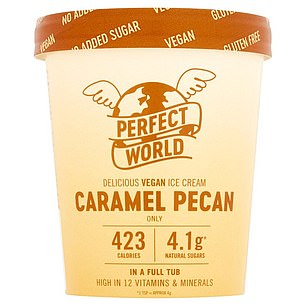 EXPERT VERDICT: This vegan ice cream contains nutrient-rich pecans, almonds and cashews, but not at high enough levels to provide much goodness in a normal serving. The natural source sweeteners make it effectively sugar-free and the creamy textured glucofibre (a type of corn fibre) in it means two scoops provide about an eighth of your daily fibre. Glucofibre can also have ‘prebiotic’ effects, feeding good bacteria in the gut, although it may not be good for some people with sensitive stomachs. It’s a soluble fibre too, which slows down the natural rise in blood glucose levels after you eat it, making it a better choice for those with diabetes. Two scoops contain 20 per cent the recommended daily intake of vitamin D (for bones) and vitamin B12 (for a healthy immune system), which are especially helpful for vegans. 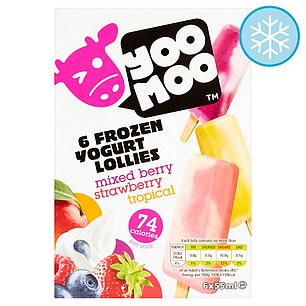 ‘HEALTHY’ BIT: Yoghurt is the main ingredient, making them lower in fat and calories than a cream-laden ice cream.

EXPERT VERDICT: These are about two-thirds yoghurt, sugar and 6 per cent blueberry juice plus a little whey powder. The dairy provides around 7.5 per cent of your daily calcium needs per lolly. That comes with 10.9g sugar though, making these lollies about 50 per cent more sugary than the equivalent amount of fruit yoghurt, and the fruit content is negligible in terms of nutrition. Choosing a dairy lolly for a child over something like a fruit ice lolly has the advantage of providing calcium and iodine, needed for a healthy thyroid function (needed for healthy metabolism) and for brain development in early childhood, but compared to the other ice creams here this product contains a lot of sugar and empty calories. 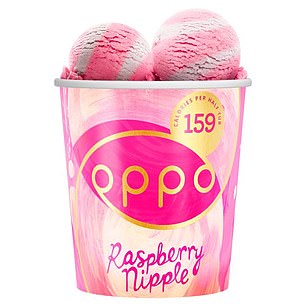 ‘HEALTHY’ BIT: Erythritol and stevia sweeteners used to replace most of the sugar and some of the fat.

EXPERT VERDICT: The sugar and calorie content is lowered through use of natural sweeteners. This low-calorie pot, which donates some profits to the breast cancer charity CoppaFeel, contains mainly milk and some cream, so will provide calcium (for healthy bones), and iodine (for healthy thyroid function) that are lacking in many ‘healthier’ vegan ice creams. It contains real raspberry juice which along with the dairy supplies natural sugars, but there is also some added sugar in the form of apple extract – but only a teaspoon per two-scoop serving, which isn’t too bad for a dessert. By comparison there are four teaspoons sugar in two scoops of Tesco soft scoop raspberry ripple. A serving does provide 13 per cent of your daily saturated fat limit, so don’t overdo it. 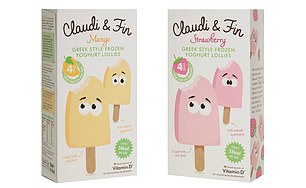 EXPERT VERDICT: These are 45 per cent Greek-style yoghurt and 19 per cent whole milk and each lolly provides 7 per cent of a child’s daily calcium requirements. Other ingredients are 15 per cent mango puree – though not enough to count towards five-a-day – along with water and one-and-a-half teaspoons of sugar per lolly. Each one is fortified with vitamin D too – about 15 per cent of the amount the NHS says adults and children should get daily from food and sunlight combined, to help keep bones strong. As a replacement for pudding, one of these works quite well. There is a calorie control advantage to lollies, as you know the exact amount in each serving rather than estimating ‘scoops’. 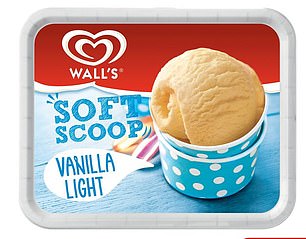 EXPERT VERDICT: This ice cream has some of the fat and sugar that are in the standard version replaced by inulin, lowering calories. Inulin is a ‘prebiotic’ that feeds good bacteria in the gut – although it can cause bloating if you have irritable bowel syndrome. But essentially this has more air and water than other tubs, so two scoops will look like the same amount but weigh less, be less dense and provide fewer calories and slightly less fat. It still has quite a bit of sugar though at nearly two teaspoons per two scoops. The original Wall’s vanilla ice cream has 82 calories, 2.6g saturated fat and 9.4g sugar in two scoops so this version isn’t a vast improvement.

TASTE: Nice vanilla, but a little too sweet. 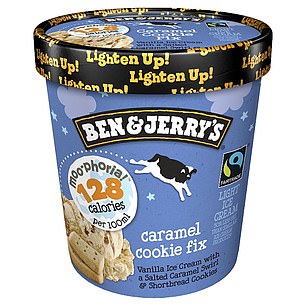 EXPERT VERDICT: If you love cookie dough ice cream this is a lower fat version made with less cream and more skimmed milk. Compared with standard Ben and Jerry’s cookie dough it has around two-thirds less saturated fat and 33 per cent less sugar and calories. But two scoops are equivalent in calories to two bourbon biscuits, and there are still more than three teaspoons of sugar (including some from milk that is less damaging to teeth) per serving, along with 13.5 per cent of your daily saturated fat limit. There aren’t any sneaked in fibres or artificial sweeteners in this though, so it should be a safer ‘light’ sweet treat if you suffer with bloating, or other gut issues. EXPERT VERDICT: This vegan vanilla dessert with mango swirled through it – is made from soya and named for the 360 calories in each large 500ml tub (compared with about 1,000 calories for the same size in Häagen-Dazs vanilla, for example). Two scoops provide 5.4g fibre – as much as in two slices of wholemeal bread – in the form of soluble corn fibre, which some studies have shown can increase calcium absorption and help control blood sugar. But watch your portion size – eating the whole tub would blow your daily sugar limit and exceed half your daily saturated fat limit. In two scoops, there’s a quarter of your daily sugar limit and 12 per cent of your daily saturated fat intake – fine in the context of a sweet treat.