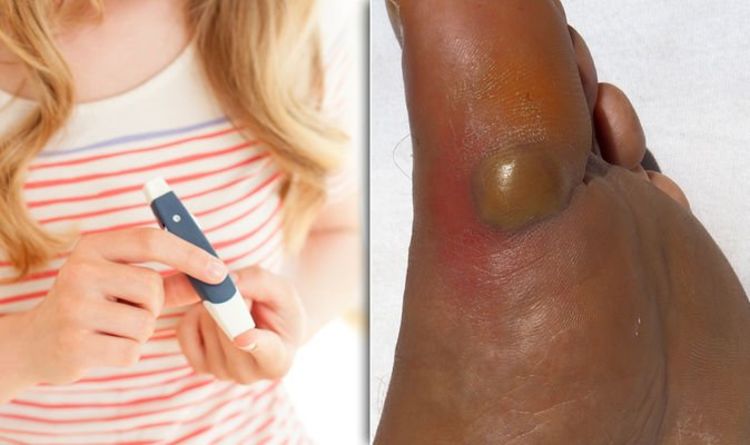 Diabetes is a common condition that affects around four million people in the UK, with around 90 per cent of all cases being caused by type 2 diabetes. The condition could be caused by the body not producing enough of the hormone insulin, or the body not reacting to insulin. Without enough insulin, the body struggles to convert sugar in the blood into useable energy. You could be at risk of diabetes symptoms if you suddenly develop a number of blisters, it’s been claimed.

Diabetes can affect many parts of your body, including your skin

Finding unexplained blisters on your skin could be an early warning sign of diabetes, revealed the American Academy of Dermatology.

While these blisters aren’t usually painful, they may appear without warning, and may appear similar to blisters that develop after a burn.

You’ll most likely find these blisters on your hands, feet or forearms, it added.

“Diabetes can affect many parts of your body, including your skin,” said the American Academy of Dermatology.

“When diabetes affects the skin, it’s often a sign that your blood sugar [glucose] levels are too high.

“This could mean that you have undiagnosed diabetes, or pre-diabetes, or your treatment for diabetes needs to be adjusted.

“It’s rare, but people with diabetes can see blisters suddenly appear on their skin. You may see a large blister, a group of blisters, or both.

“The blisters tend to form on the hands, feet, legs, or forearms and look like the blisters that appear after a serious burn.”

You should speak to a doctor if you develop these blisters, which are known as bullosis diabetricorum.

If you’re at risk of diabetes, you may also develop yellow or brown patches on your skin, it added.

These patches may appear similar to pimples, but they can turn into swollen or hard areas of skin if they’re left untreated.

Diabetes is a common life-long health condition. There are 3.5 million people diagnosed with diabetes in the UK and an estimated 500,000 who are living undiagnosed with the condition

A classic symptom of diabetes can lead to rapid weight loss

Many people may be living with diabetes without even knowing it, because the symptoms don’t necessarily make you feel unwell.

Common diabetes symptoms include feeling very fatigued, having cuts or wounds that take longer to heal than normal, or having an unquenchable thirst.

It’s crucial that diabetes is diagnosed early, as it can lead to some deadly complications, including heart disease and strokes.

Speak to a doctor if you’re worried about the symptoms of diabetes, or if you think you may be at risk.

A quick blood test should be enough to reveal whether you have diabetes, or if you’re at risk.