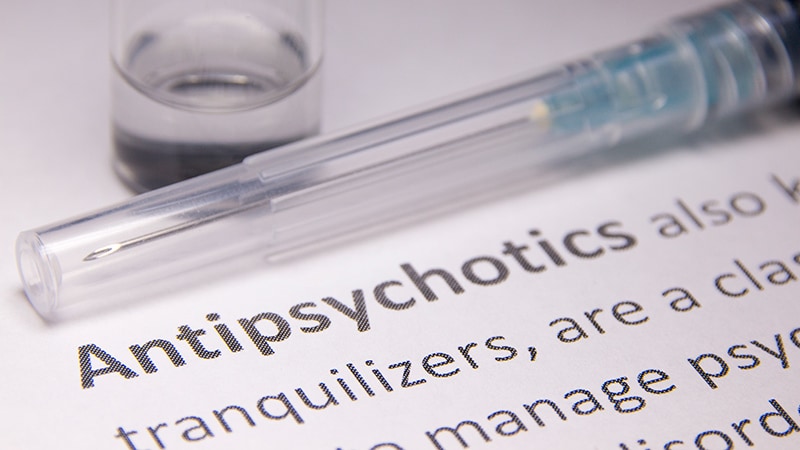 GLASGOW — Dermatologists do not feel confident in independently prescribing antipsychotic medications for patients with delusional infestation, shows a UK survey that also indicated there is a clear demand for training in prescribing these drugs.

Delusional infestation is a rare disorder characterized by an individual’s belief that his or her skin, body, or immediate environment is infested by small, living pathogens, despite a lack of any medical evidence. Most of these patients require antipsychotic medication to alleviate symptoms.

The survey of almost 80 dermatologists found that almost 90% had not prescribed antipsychotics in the previous month for patients with psychodermatology conditions and that the most common barrier to prescribing was lack of experience with the drugs.

This was reflected in only 10% of survey respondents who said they were “happy to” prescribe antipsychotics without consulting either dermatology or psychiatric colleagues, and less than half having attended a related course.

Yet the research, presented July 6 at the British Association of Dermatologists (BAD) Annual Meeting, indicated that more than 75% of respondents would attend such a course to increase their confidence.

This finding, said study presenter Ling Li, MD, Churchill Hospital, Oxford University Hospitals NHS Foundation Trust, Oxford, UK, shows that there is a “clear demand for training, particularly among all the registrars [residents] who we surveyed.”

Li noted that the UK’s Joint Royal Colleges of Physicians Training Board’s latest curriculum for dermatology training highlights psychocutaneous medicine as a key area, and “that will include antipsychotic medication.”

The BAD also recently published guidelines for the management of adults with delusional infestation, which includes a recommendation to conduct a survey on attitudes toward antipsychotic prescribing for the condition among UK dermatologists.

Heeding that call, Li and colleagues sent an email containing a 10-question online survey to members of the BAD and the British Society for Medical Dermatology. Questions covered familiarity with antipsychotics and frequency of prescribing, confidence around antipsychotics, and current training and future needs. Responses were received between February through April 2021.

The most common barrier to prescribing antipsychotic medications was a lack of experience with the drugs, cited by 66 respondents, followed by concerns over drug monitoring, cited by 43 respondents.

In addition, 42 respondents highlighted concerns over adverse effects, 36 cited lack of experience in psychodermatology clinics, and 19 cited lack of experience in discussing psychodermatologic conditions with patients. Other barriers mentioned by the respondents included difficulties with patient acceptance of a psychiatric medication prescribed by a dermatologist.

An audience member went further, saying that clinicians have been told not to “confront” such patients and that the temptation is therefore to cloak the discussion of antipsychotics in nonthreatening language so that it is more acceptable to the patient.

However, under the UK system, a letter with the results of the consultation, including information that an antipsychotic has been prescribed, must be sent to the patient’s family doctor along with a copy that goes to the patient. “The situation is almost impossible,” the audience member said, adding that there “must be some arrangement where in certain circumstances dermatologists could be allowed not to write to the patient” or alternatively, “write an entirely different letter” to the family doctor.

Session co-chair Susannah Baron, MD, a consultant dermatologist at St. John‘s Institute of Dermatology, Guy‘s and St. Thomas’ Hospital, London, UK, said that, in these situations, it is “really helpful to talk about doses” with patients.

She explained that she uses the analogy of aspirin, which has different effects depending on the dose given, giving pain relief at high doses but primarily an antiplatelet effect at low doses.

In the case of an antipsychotic, it is helpful to explain to the patient that “you don’t think they’re psychotic, and you’re prescribing it in a very low dose, because what it can do is help with their symptoms,” Baron added. “You have to be very open because if you’re not, they go to the pharmacy, and the pharmacist says: ‘Why are you on an antipsychotic?’ “

Despite these responses, 60 (77%) respondents said they would be interested in attending a training course for prescribing antipsychotics, which included all 20 of the registrars who took part in the survey.

Alia Ahmed, MD, a psychodermatologist at Frimley Health Foundation Trust, Windsor, UK, and lead author of the BAD guidelines, commented from the audience that the survey results were “sort-of what we expected.”

She explained that the intention of the authors when developing the guidelines “was to be able to help our junior colleagues and our peers to be able to feel competent to discuss antipsychotics with patients with delusional infestation and also initiate management.”

Ahmed added: “Why we’re encouraging our colleagues to prescribe antipsychotics is the longer you leave this type of psychotic illness untreated, the worse the prognosis.”

No funding or relevant financial relationships were declared.