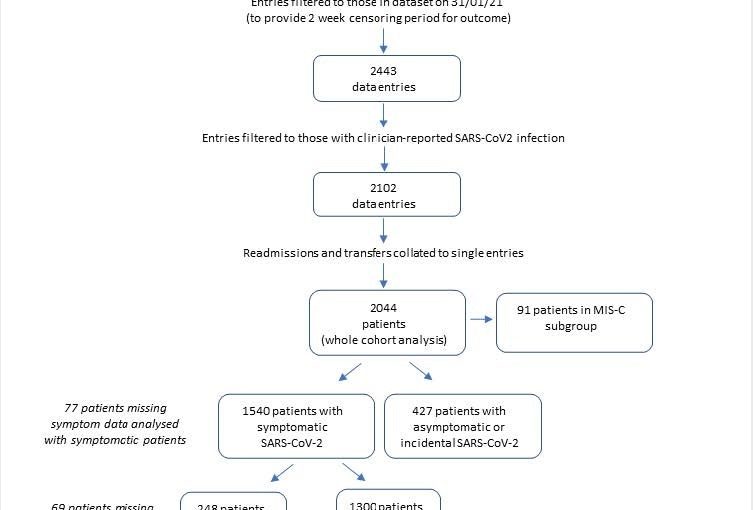 Researchers in the UK have conducted a study suggesting that severe disease in children and young people admitted to hospital following infection with severe acute respiratory syndrome coronavirus (SARS-CoV-2) is still rare and was no more common during the second wave of infections than the first.

The SARS-CoV-2 virus is the agent responsible for the ongoing coronavirus disease 2019 (COVID-19) pandemic that has claimed the lives of more than 4.7 million people worldwide since it began in late December 2019.

During the first pandemic wave, children and young people in the UK were less affected following SARS-CoV-2 infection than older adults.

However, several factors have changed since the first wave, including reports of more severe disease since the B.1.1.7 (alpha) variant emerged, the relaxation of shielding advice, and increases in face-to-face schooling.

Now, Malcolm Semple from the University of Liverpool and colleagues have tested the hypothesis that clinical characteristics among hospitalized children and young people may have differed between the first and second waves due to a combined impact of B.1.1.7, schools reopening and the relaxation of shielding.

The team’s study of 2,044 children and young people hospitalized across 187 hospitals in the UK found no evidence of increased disease severity between the first and second waves of the pandemic.

“We provide evidence suggesting the emergence of the alpha variant did not lead to more severe disease in CYP [children and young people] in the UK,” writes Semple and colleagues.

However, the researchers say there is no guarantee that the generally mild disease observed in CYP to date will continue to predominate and that patterns of infection still require careful monitoring in this group.

A pre-print version of the research paper is available on the medRxiv* server, while the article undergoes peer review.

More about factors that have changed between the two pandemic waves

During the first wave of the COVID-19 pandemic, CYP were significantly less affected than adults in terms of case numbers, disease severity, hospital admissions and death.

“A significant amount of knowledge was gained about the clinical characteristics and outcomes of COVID-19 in CYP during the first wave of the pandemic. However, several external factors changed with the emergence of the second wave,” says Semple and colleagues.

Most UK schools were closed during the first wave in the spring and summer of 2020, but were mostly open during the second wave in the autumn and winter.

Also, during the first wave, CYP who were considered extremely clinically vulnerable were advised to shield from all non-essential contact. This recommendation was no longer continued from autumn 2020.

Furthermore, new variants have emerged, including the B.1.1.7 lineage that was first detected in September 2020 and became the predominant strain in the UK by the end of December.

The alpha variant contains mutations that have been associated with increased transmissibility, more severe disease, higher rates of hospitalization and death among adults.

However, “whether the alpha variant, dominant in the second wave, causes different symptoms or more severe disease in CYP compared to strains circulating in the first wave has not been analyzed in detail,” said the researchers.

What did the researchers do?

Semple and colleagues conducted a prospective multicenter observational study of 2,044 patients, aged less than 19 years, who were hospitalized in the UK with clinician-reported SARS-CoV-2 infection. Patients from 187 hospitals across England, Scotland and Wales, were enrolled between 17th January 2020 and 31st January 2021. 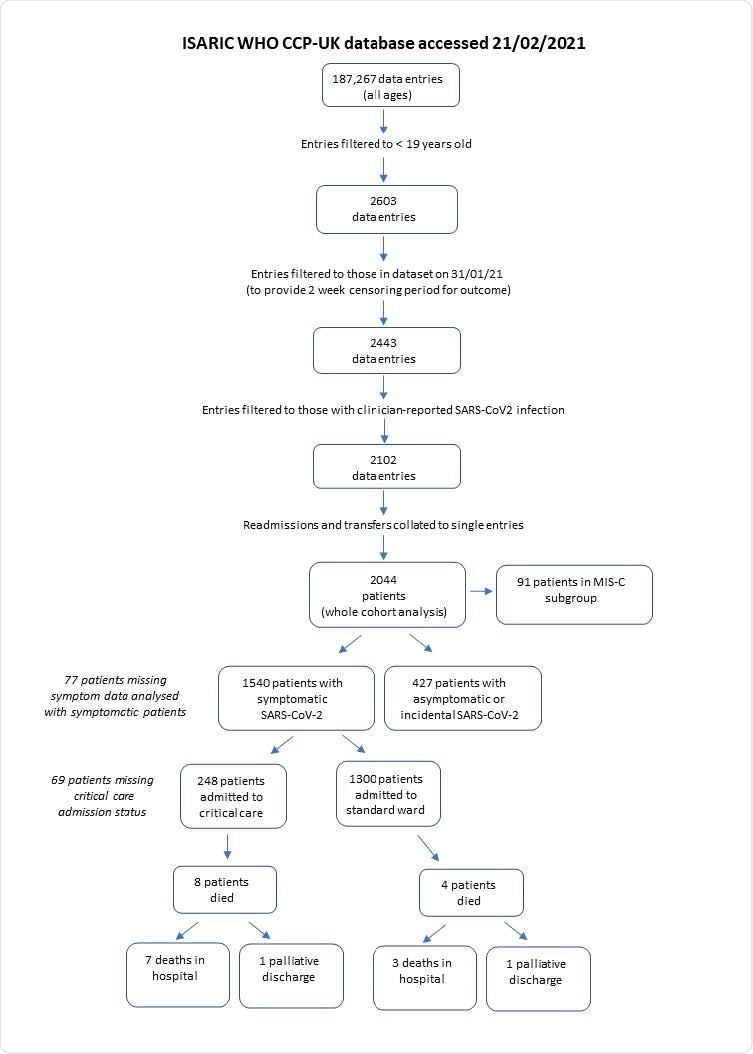 Flowchart of patient inclusion and outcomes

Of the 2,044 participants, 427 (20.6%) had asymptomatic or incidental SARS-CoV-2 infection and were excluded from the main analysis.

Among symptomatic participants, 16% were admitted to critical care, 5.6% had MIS-C and 0.8% died.

Fever occurred more frequently during the first wave than the second, at 76.8% versus 63.6%, but presenting symptoms were otherwise very similar. Comorbidities were similar for each wave among symptomatic CYP across the whole cohort.

No change in the proportion of CYP admitted to critical care

After excluding CYP with MIS-C, patients admitted during the second wave had lower pediatric early warning scores (PEWS) at presentation, lower requirement for antibiotic use and less respiratory and cardiovascular support compared with the first wave. 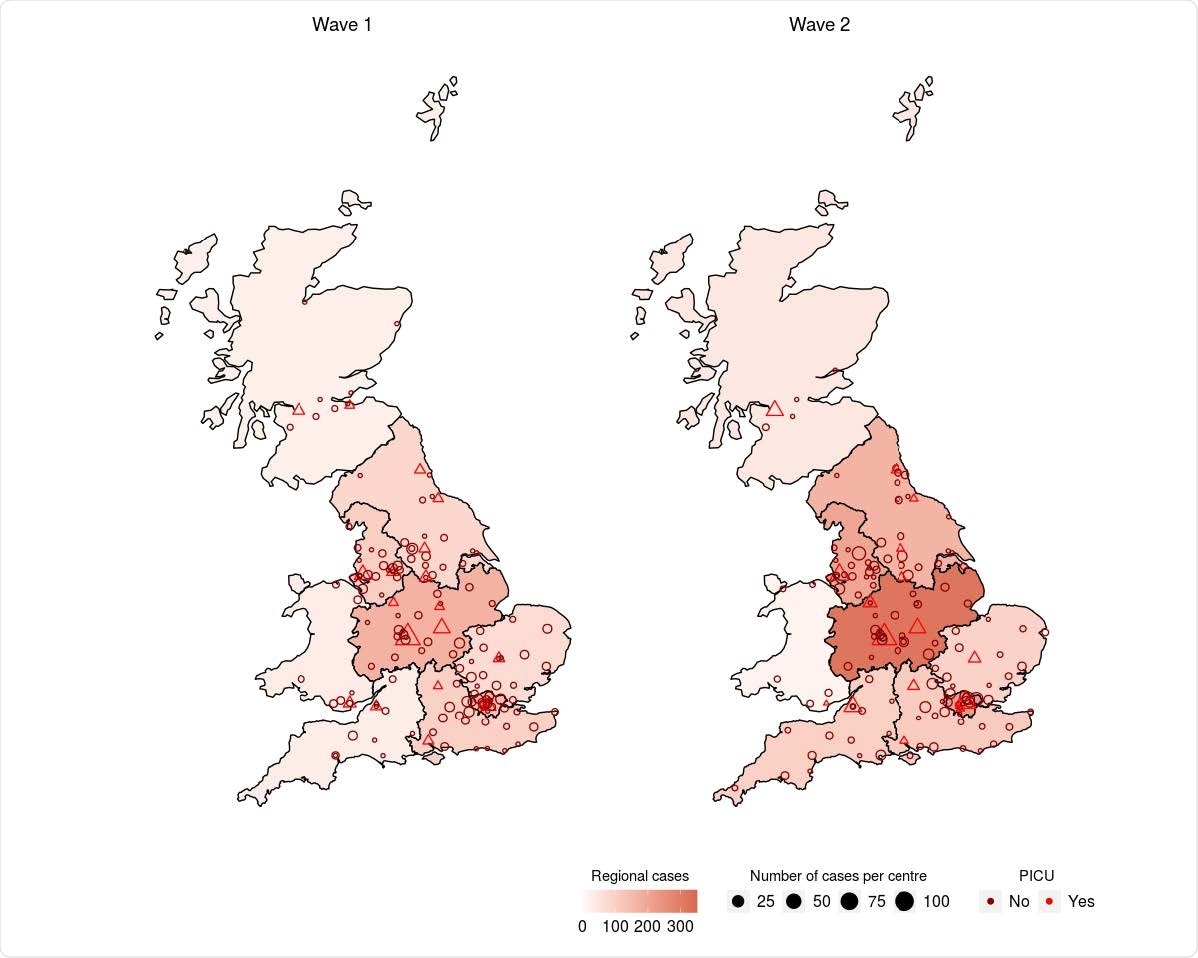 Map of sites of patient enrolment and cases by site. Sites with access to an onsite PICU are represented with triangles and those without as circles.

There was no change in the proportion of CYP admitted to critical care between the two waves.

“Despite concerns about more severe disease and fatalities associated with the alpha variant in adults, relaxation of shielding advice and increases in face-to-face schooling, no difference was found in the proportion of symptomatic CYP admitted to critical care between the two waves,” writes the team.

However, Semple and colleagues say that as new SARS-CoV-2 variants emerge, there is no guarantee that the generally mild disease observed in CYP to date will continue to predominate.

“Pediatricians and epidemiologists must remain vigilant in monitoring patterns of SARS-CoV-2 infection in CYP and develop more efficient systems to inform policy and clinical practice with speed and accuracy,” they conclude.

medRxiv publishes preliminary scientific reports that are not peer-reviewed and, therefore, should not be regarded as conclusive, guide clinical practice/health-related behavior, or treated as established information.

Sally first developed an interest in medical communications when she took on the role of Journal Development Editor for BioMed Central (BMC), after having graduated with a degree in biomedical science from Greenwich University.