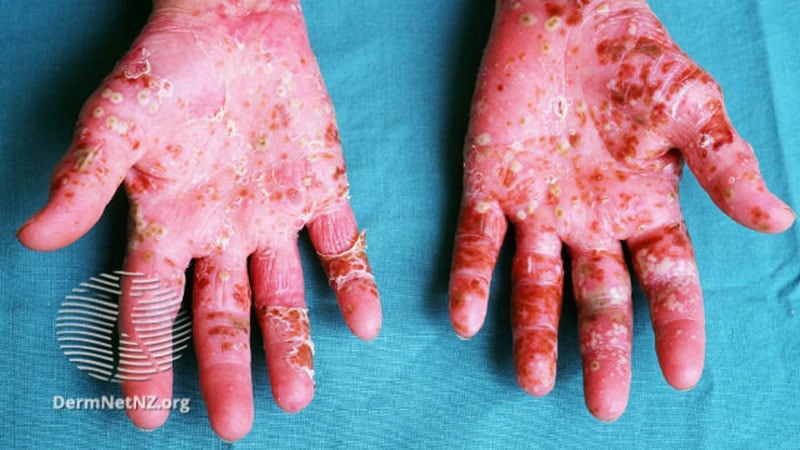 A wide range of treatments are being used to manage patients with palmoplantar pustulosis (PPP) and generalized pustular psoriasis (GPP), according to the results of two case series that evaluated the characteristics and course of the disease in patients diagnosed with PPP or GPP.

“These case series confirm the rarity of both generalized pustular psoriasis and palmoplantar pustulosis (PPP) and highlight the persistence of symptoms over time and the lack of effective treatment options available to patients,” Megan H. Noe, MD, MPH, MSCE, first author of both case series and assistant professor of dermatology, Harvard Medical School, and a dermatologist at Brigham and Women’s Hospital, both in Boston, said in an interview. In both studies, she added, “more than 20 different therapies were utilized, demonstrating a lack of consensus regarding effective treatment.”

The two case series were published in JAMA Dermatology.

The researchers also examined health care utilization in 128 patients and found that 82% had at least one follow-up visit, 31.3% required two to three follow-up visits, and 18.8% had five or more follow-up visits. When adjusted to account for age and sex, there was a decreased risk of requiring five or more healthcare visits per year for women (odds ratio, 0.49; 95% confidence interval, 0.25-0.95)

Noe and colleagues also evaluated 95 patients with GPP in a retrospective longitudinal case series of patients treated at 20 academic dermatology practices in the United States between January 2007 and December 2018. As in the PPP group, most patients in the GPP case series were women (70.5%), and over half were White (53.7%); the mean age was 50.3 years old, and the mean follow-up time was 19.8 months. A majority of patients with GPP were never-smokers (52.6%) or former smokers (20%). When patients with GPP initially presented to the study sites, 36.8% were admitted as inpatients, 9.5% presented in the emergency department, and 53.7% presented in an outpatient or ambulatory dermatology setting.

GPP commonly appeared on the trunk and extremities, but was “also reported on the scalp, face, genitals, nail unit, and mucous membranes in a minority of patients,” the researchers said. Overall, 62.1% of patients had skin pain, 26.2% had joint pain, 16.8% reported tachycardia, and 9.5% reported fever. Hypertension, depression, diabetes, chronic kidney disease, and hypothyroidism were common comorbidities of GPP, the researchers noted.

For 53 patients with follow-up data of at least 6 months, 19 (35.8%) had been hospitalized because of their symptoms, and 8 patients were hospitalized for further GPP-specific concerns. Patients with GPP had a median 3.2 dermatology visits per year and a maximum of 18 visits. A model that was adjusted for age and sex showed women were at a decreased risk for being admitted to the hospital or emergency department in the follow-up period (odds ratio, 0.19; 95% confidence interval, 0.04-0.83).

PPP and GPP in Practice

Sylvia Hsu, MD, professor and chair of the department of dermatology at Temple University, Philadelphia, who was not involved with the research, noted that most dermatologists will see few, if any, cases of PPP and GPP in a year. At her center, she estimated that she sees about one PPP case per week, and one or two cases of GPP a year. In general, she said that her clinical experience matched what was found by the authors of both case series.

For patients with PPP, “I would say the average dermatologist would probably start out with a superpotent topical steroid like clobetasol or halobetasol ointment,” Hsu said.

In place of acitretin, Hsu recommended cyclosporine for a patient of childbearing age as a short-term solution to resolve symptoms before transitioning them to another therapy. “A woman of childbearing age, you put on cyclosporine, you’ve got to transition to something else,” she said. “And so many times you wean them off, the pustular psoriasis comes back because the topical steroid doesn’t work that well.”

One possible option is the interluekin-23 inhibitor guselkumab (approved by the Food and Drug Administration for treating moderate to severe plaque psoriasis and psoriatic arthritis) but cost and effectiveness can be a factor. Although studies have shown efficacy, biologics as treatments for PPP are “hit or miss,” Hsu said.

Regarding use of systemic therapies, Hsu cautioned against using them to treat plaque-type psoriasis. “We always learn, don’t use a systemic steroid like prednisone to treat psoriasis because it helps, but it comes back with a vengeance,” she said. “Sometimes when you treat plaque-type psoriasis with prednisone, it could come back with a vengeance, and it can come back as generalized pustular psoriasis.”

For patients with GPP, “you need a quick fix” because of the painful symptoms associated with the disease, Hsu said. In this case, she recommended cyclosporine and said she would avoid prescribing topical medications. “You’re going to have to give an oral drug because usually when we’re seeing somebody with GPP, they’re either a hospital consult or they just walked in the door,” she said. After prescribing cyclosporine, you would transition to another treatment like a biologic “as quickly as you can” with the knowledge that the biologic “may or may not work.”

Commenting on both case series in a related editorial, Edward W. Cowen, MD, MHSc, senior clinician and head of the dermatology consultation service in the dermatology branch of the National Institute of Arthritis and Musculoskeletal and Skin Diseases, Bethesda, Md., said that “much of the clinical presentation of pustular disease remains a mystery,” including why tobacco use is a risk factor for developing pustular psoriasis, and why tumor necrosis factor inhibitors “induce pustular disease in a small number of patients” with psoriasis vulgaris.

“Most importantly, we still do not know if localized and generalized pustular psoriasis all truly represent different variants of the same disease process, and if not, which biologic treatment represents the best option for a given clinical variant,” he wrote.

Cowen noted that the multi-institutional approach to collecting the retrospective data in these case series could be used as a “basic framework to build on for future clinical trials for rare skin diseases such as pustular psoriasis.”

In the interview, Noe said that she hoped that the “Pustular Psoriasis in the US Research Group” she and her coauthors created for the case series could help with the development of prospective clinical trials. “For pustular psoriasis and other rare diseases in dermatology, multi-institutional collaborations are necessary to conduct prospective research,” she said.

“While not directly studied in our research, I think it is important to consider the negative impact on quality of life, experienced by patients with pustular psoriasis. In our study, many patients experienced exacerbations of their disease over time, and it is important to consider the impact this has on patients,” she said in the interview. “Continued research on pustular psoriasis is necessary to decrease the negative impact of these diseases on the lives of our patients.”

The case series were funded in part by an institutional grant from Boehringer Ingelheim. The authors report relationships with various pharmaceutical and biopharmaceutical companies, technology companies, medical publishing companies, medical journals, and medical societies with connections to the topic area in the form of serving in roles as a chief medical editor, consultant, data safety monitoring board member, deputy editor, principal investigator, research investigator, scientific adviser, or speaker; or having received grants, honoraria, personal fees, or research funding. Cowen has no disclosures. Hsu reports serving on a Boehringer Ingelheim advisory board for a product being evaluated as a potential treatment for GPP.